Since the last update on the project in January 2014 we have gone ahead with work on the three main houses – house number 1 in the upper part of the land where the offices are located and the apartments of those working for Meriling, house number 2, the Master’s house, has been finished and the Geko currently resides in the lower part of the building in Rinpoche’s absence, and house number 4, which was allotted to Dzamling Gar, in which there are the offices and 4 apartments used by the Gar and the Gakyil. 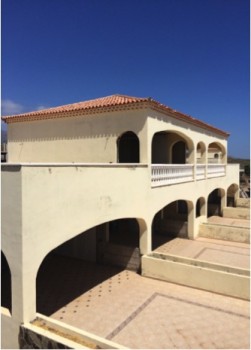 External work is starting on the Gar houses which are identical except for 1 and 13. Plans are to create 4 apartments on the lower floor and 1 big one or an office on the upper floor.

Work has begun on the houses that were assigned to the Gars. We have started working on the external part of the houses, connecting them to the water and electric grids and the sewage system, and building the external pathways that connect them, in other words, everything that needs to be done to make the houses functional externally. The houses have been painted yellow, we have put in stone moulding around the windows, and the window frames are aluminum.

We have sent out a letter to the Gars in which we have outlined the costs involved in this external work and asked them to commit themselves actively to collecting funds and sending them to cover at least a part of the amount that is needed. Some of the Gars have sent part of the amount, others are about to. So the work is going ahead and towards the end of the year, as we have already planned, the first part of the external work should be completed.

We have also told the Gars that they should make a choice on how they would like to finish the internal part of their respective houses. We have sent them the final detailed project that has been approved in which the houses will be completed in the same way that the first three houses (1,2 and 4) were done. If the Gars are happy with this, we can finish their houses internally in the same way.  The Gars should communicate their choices to us as soon as possible so that we can continue our work because the best thing would be to have the possibility to do not only the external work on a house but also the internal, at the same time.  Now we will see if this is possible. It depends on the financial possibilities of the different Gars. 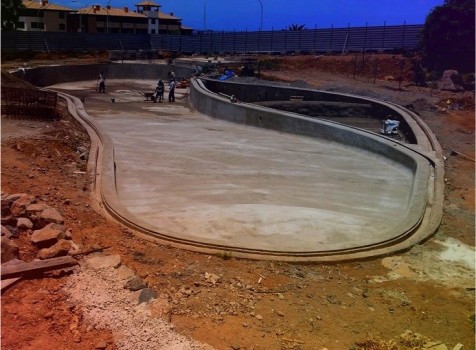 The swimming pool being prepared for its inauguration in September 2014

We are planning to inaugurate the swimming pool in the second half of September, which means that the work on the pool will be finished by the end of August. 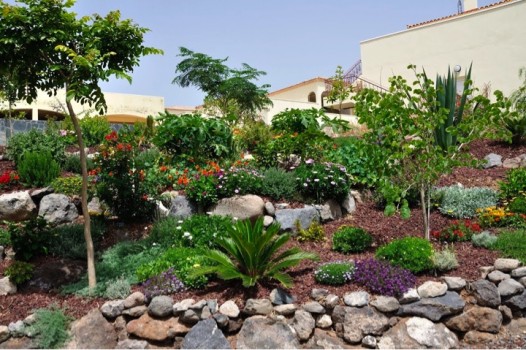 There are 2 kinds of gardens at the Gar: ornamental gardens that require daily care and more water and edible gardens based on the principles of permaculture. 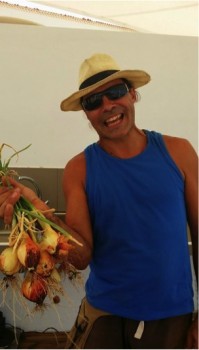 The gardens are blossoming and we have a couple of full time gardeners as well as people who regularly help in karma yoga caring for them and the nursery. The green areas are very lovely although it is quite a lot of work to care for them. We have extended the pre-existing irrigation system for the gardens so that it is much easier to water them. Some of the garden areas that were prepared under the guidance of Saviana Parodi earlier in the year receive water through a system of recovery and filtration of wastewater from the houses, but since some of the plants are young and require more water they have to be helped additionally by the irrigation system. So it is important for us to keep the plants alive at the moment so that they can grow and develop before becoming able to be more self-sufficient for water.

For the rest we are going ahead with the project for the centre. The preliminary project has been approved but this has to become a working project and so we are working on the details of what we would like to have.

The whole Dzamling Gar project is in four phases: the first consisting of connecting to the electric and water systems, telephone and internet connections, putting up the big tent for the retreats, was completed in November 2013.

The second phase involves the 8 houses, 6 for the Gars and 2 for other groups, one of which will be a house for the elderly, something we are trying to organize with the International Gakyil.

The third phase includes the swimming pool for which we already have the approval. 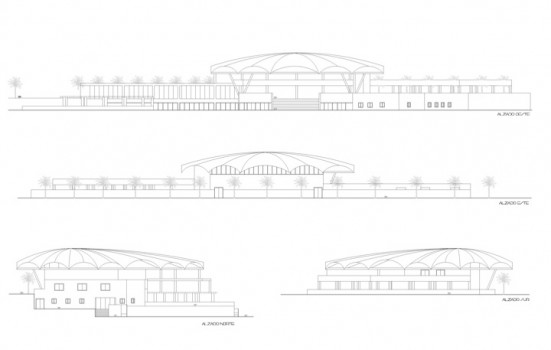 Original plan of the Gonpa by Benedetta Tagliabue. This is part of the final phase of the project and is more of an idea at the moment.

The fourth phase, the most important, is the centre, for which we need to prepare the final detailed project. At the moment we only have approval for the cubic area of construction, although this is for the whole project. This part of the project will take some time and we will need a bit of patience, collaboration and money.