On February 24, 2015 we published a news item in The Mirror regarding the closure of the Istituto Italiano per l’Africa e l’Oriente (IsIAO) and fears about the future of its patrimony (http://melong.com/-tibetan-treasure-at-risk/)). There was particular concern about the library, containing about 140,000 volumes, 2600 periodicals, and rare and valuable collections, including the collection of Tibetan texts donated by Tibetologist Giuseppe Tucci, which consists of nearly 2000 manuscripts and xilographs collected during his various expeditions to Ladakh, western, and central Tibet. Chögyal Namkhai Norbu also studied this collection during his first years in Italy. Fearing that this patrimony could somehow be lost, while several uncontrolled rumors – founded or not – went around about taking apart and even selling it, a proposal was made to join the Tucci collection to that of Chögyal Namkhai Norbu at Merigar West, with the support of the municipality of Arcidosso. Later on, the Municipality of Macerata, the hometown of Tucci, also expressed interest in the management of the patrimony of the Institute. 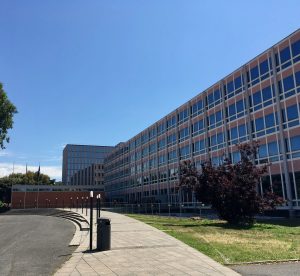 In 2013, in order to safeguard the library collection of the IsIAO, the Lazio Region formally declared its exceptional cultural interest, and on May 9, 2017, about six years after its closure, the texts of the library became available once again in Rome, at the Biblioteca Nazionale Centrale di Roma.

It is not, therefore, the reopening or re-founding of the IsIAO / IsMEO, closed not without controversy at the end of 2011 and put into liquidation by joint arrangement of the Ministry of the Economy and Finance, and the Ministry of Foreign Affairs. It is making the library, the photo library, and the collection of maps of the IsIAO available within the consultation system of the BNCR, where the computer catalogue has already migrated. The BNCR has, in fact, signed an agreement for the safeguarding, valorisation, and use of the IsIAO Library with the Ministry of Foreign Affairs and Cooperation (MAECI), which is in charge of the liquidation of institutions and thus deals with the remainder of the patrimony of the IsIAO such as the archive (partially deposited in the Foreign Archives) and the museum collections (which, like the collections of the Museo Nazionale d’Arte Orientale, will instead become part of the recently founded Museo delle Civiltà.

The following people participated at the re-opening ceremony of the IsIAO Library at the BNCR: Andrea De Pasquale (Director of the BNCR), Armando Barucco (MAECI Analysis Unit), Elisabetta Belloni (Secretary General MAECI), Antonia Pasqua Recchia (Secretary General of the Ministry of Cultural Heritage and Activities and Tourism), Rossana Rummo (General Director of the Directorate General of Libraries and Cultural Institutes) and Mr. Mario Giro (Deputy Minister MAECI). Most of the interventions focused on the importance and value of the patrimony of the IsIAO library, on its renewed usability, and on the various steps that were needed to achieve this, in addition to thanking people for their collaboration. In particular, the Director of the National Library, Andrea De Pasquale, praised the rapidity of the completion of the reopening project (the project was awarded in November 2016), the professionalism and care in moving the material, the re-ordering of the shelving, the cleaning and, where necessary, mold disinfection and restoration that involved not only the books but also the photographic and map collections. There were also speeches about promoting the library, the need to resume acquisitions and subscriptions to magazines, collaboration with MIUR (the Ministry of University Education & Research) to launch study programs in collaboration with universities, and the possibility of setting up a bibliographic and documentary Center for Studies on the East and Africa with the Library. Mario Giro’s (Vice-Minister MAECI) conclusion was slightly different in tone and particularly stressed the waste and time lost in the whole of the IsIAO story, so that this reopening could not, in his view, be seen as anything more than a breaking even. He then expressed shared concerns over the future, accompanied, however, by some unkind comments aimed at the scholars.

All of this was done not without some unavoidable slipups. First of all the Tibetan texts projected on the screen were upside down and, instead of arousing expected interest in the magnitude of the patrimony acquired caused some grumbling and laughter among the many Tibetan scholars present among the public. 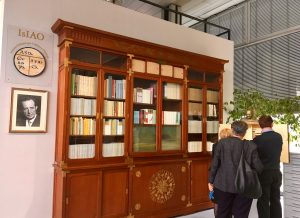 Aside from the speeches, it was possible to visit the actual library, or at least its beginnings. Inside the Manuscript Room they had placed the large bookcase housing the Dubbiosi collection that now contains some of the publications promoted by IsIAO during its history, flanked by a plaque of IsIAO, a photo of Tucci, and a bust of Gandhi. The impression is, of course, that there is not much in comparison to what was an entire library, but there is, of course, the possibility of expanding the section displayed. In addition, although not visible on the shelves, the texts will be available on request in the inner rooms. As mentioned, the collection will remain a separate section within the BCNR with plans to create a study center around it. 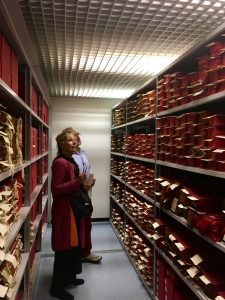 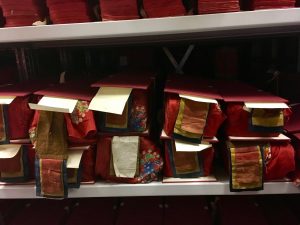 Thanks to the kind and helpful guidance of Dr. Pasqualino Avigliano, in charge of the manuscript sector, it was possible to visit the room (usually not accessible) where the collection of Tibetan texts is kept. The texts, arranged on mobile racking shelves, appeared to be in good condition and well-kept, as evidenced by the visible joy of Prof. Elena de Rossi Filibeck and her collaborator Michela Clemente, PhD, who have been involved in cataloging and rearranging the collection for decades when it was at the IsIAO and had not had access to it for years. Michela Clemente (University of Cambridge) commented: “We have been waiting for the reopening of the IsIAO Library for six years, and colleagues abroad have been happy to hear the news. During the years it was closed, Tibetologists from around the world continued to write and ask Elena De Rossi Filibeck, the scientific director of the Collection, and me, information about accessing the texts of the Collection, and news on the reopening the Library. Especially in recent years, we lost hope of being able to work again on the texts. Italian Tibetology, which started with Giuseppe Tucci and Luciano Petech and became an institution with Elena De Rossi Filibeck, has always been characterized by studying the original texts, and having the chance to access the huge and precious collection preserved at the IsIAO. We are very happy that this tradition can be finally resumed and carried on by us and future Tibetologists.”

In fact, over the years many institutions and scholars have requested and continue to request access to the Tibetan collection. This attests to its uniqueness and value that, even though the availability of Tibetan texts both online and printed has increased exponentially, remains remarkable. Tibetan texts can be consulted by making a justified and referenced request.

Overall, one can hope that this is a good starting point for what has been a troubled affair.

There is also an emblematic exhibition of the treasures of the IsIAO at the National Library, which can be visited from 9 May to 30 June. 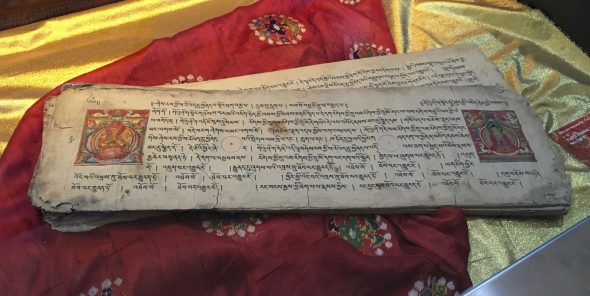 A detail of one of the Tibetan manuscripts on display.