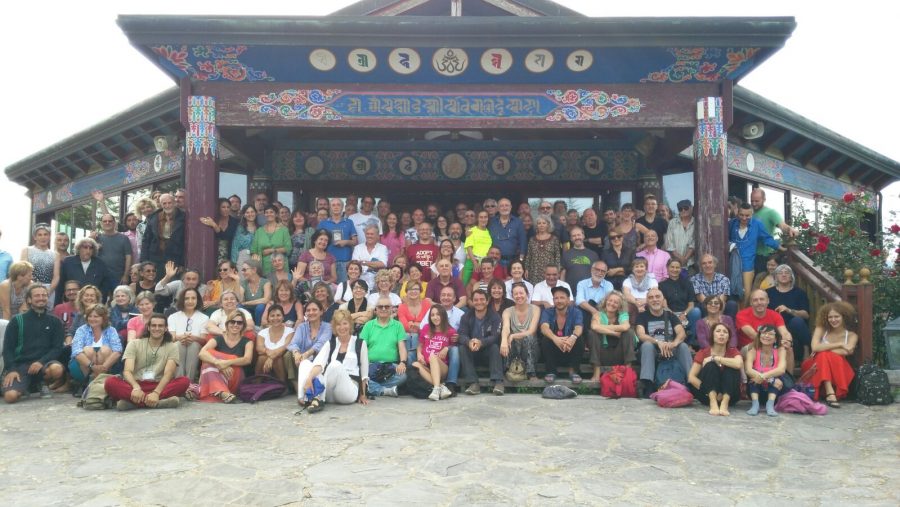 Approximately 250 people participated in the very intense and really enjoyable sangha retreat at Merigar West. A lot of practitioners were involved in the organization and everybody worked at his/her best to create the friendly atmosphere indispensable to make everybody, no matter whether “old students” or newcomers, feel at their ease, “at home”, to quote what our precious Master has repeated several times.

The retreat was focused on the explanations taken from “The Mirror” one of the very first books written by Rinpoche transmitted for the first time to the fortunate students who were present at the retreat of Lucomitoni in Sardinia in 1977  with some of them present at this retreat as well.

Five instructors were involved and each of them dealt with a specific topic. Oliver Leick, Elio Guarisco, Fabio Risolo, Igor Legati and Gino Vitiello gave very detailed clear explanations alternated with short practice sessions aiming at calming the mind, observing the flow of thoughts and recalling the state of presence. Amazing and moving was how all of them spoke from the depth of their hearts manifesting the knowledge acquired after many years of practice, giving examples drawn from their personal experience, telling relevant stories and anecdotes in such an impressive way that they were really able to involve the audience and lead meditation sessions in a skillful wise way.

Then every day in the afternoon other sessions were organized: Elio led two sessions of practice of the Rushen of the body and of the voice, Fabio Sanders explained the importance of the language in study and practice, Laura Evangelisti presented Yantra Yoga to newcomers, Prima Mai presented Vajra Dance, Annamaria Moscatelli explained Ganapuja to new students, Salima Celeri explained the origin and the importance of Khaita Joyful Dances, Adriano  Clemente illustrated the importance of studying the text Dorje Sempa Namkhai Che, following the indication of Rinpoche and there was a Chöd practice led by Nina Robinson as well.

As usual during the retreat there were sessions of Yantra Yoga, Vajra Dance and Khaita led by various instructors, beside the presentation of ASIA activities and other more mundane events like an excursion to the source of the Fiora river in a nearby village and a wonderful cocktail party organized by Monica Patiño for everybody on Sunday evening.

I am sure that at the end of the retreat all participants went back home with a sense of profound gratitude towards all the instructors and in particular to Rinpoche, the source of all who, even if not physically present, was there with all his compassion, energy, and transmission, inspiring all the instructors and giving us the sense of being a strong community, able to practice, to develop and to proceed on the path of personal and collective evolution, following his teaching and his example.