“In the year 1997 when I traveled in East and Central Tibet, I received many requests to help to build some Colleges of Study (Shedra) and Colleges of Practice (Drudra). I would like to ask the following Dzogchen Communities to collaborate on these projects. It is not at all easy to get permission to go into these places to work on the projects.

The only possibility is that you connect with our ASIA Organization and in that way you can have direct contact with your project place or Gonpas. For the future, I really hope you can go to these places to see the real situation. When you make contact with ASIA, you can have more of a clear idea of how you should work with these Gonpas.

Galengon or Galenteng Monastery is one of the oldest monasteries of East Tibet and was originally founded by Lhalung Palgi Dorje; the student of Padmasambhava and Sogpo Palgyi Yeshe’s student.

Later there was a very important Sakyapa teacher called Ga Anan Dampa and since then Galengon has mainly followed the Sakyapa Tradition.

We have a project of building a College of Study and later a small College of Practice there. I would like to ask to the Dzogchen Community of Merigar to take care and sponsor Galengon so that these colleges can be realized in a concrete way”.

From “Tibetan Gonpas in need of support. Sponsorship through Dzogchen Community Collaboration” by Chögyal Namkhai Norbu

Realization of the Retreat Center of Galingteng Monastery 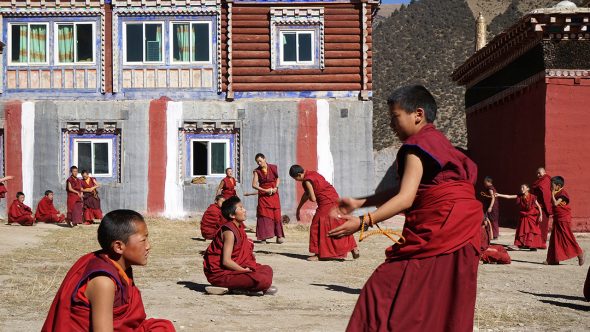 Galingteng is a village inhabited by 3000 nomads who are mostly living on yak herding and small businesses. It is located in Derge County, in the Tibetan Autonomous Prefecture of Ganze, in Sichuan Province. ASIA has been working in this area since 1993. In the village of Galingteng, due to its cultural and historical importance, we have carried out several projects aimed at protecting traditional Tibetan culture. We rebuilt the college where young monks are studying Tibetan culture, spiritual tradition and language, renovated the mural paintings of an old temple from the 14th century, and renovated ancient stupas and monuments.

During our last mission, in December 2015, the local people, the monks, and abbots of the monastery submitted a proposal to rebuild the old college for spiritual practices on the sacred mountain of Shub lung. When students at the college complete their 7 years of studies, they go into retreat for four years to put into practice the knowledge acquired during their studies.

The construction of this college will be the last step to complete the traditional course of studies and train future teachers qualified to maintain and transmit the spiritual and cultural heritage of Tibet. 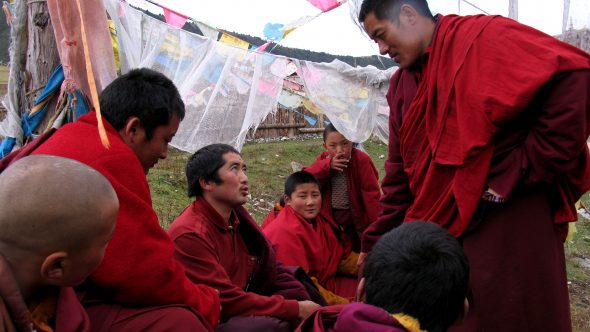 The college will host 16 students, one teacher and his assistant for a total of 18 people.

It will consist of a small temple to be used as the main classroom for lessons and communal practices and 18 small rooms where the students will spend 4 years without coming out of the college. The whole college will be built using only local materials such as wood, stones, and earth, and will be constructed by local Tibetan carpenters following the ancient architectural tradition. The buildings will be painted in Tibetan style and furnished with tables, beds, stoves, bookshelves, kitchen tools, and books.

To realize the retreat center, we need your help too:

Make a donation at     http://asia-ngo.org/en/what-you-can-do/donate/

SUPPORT GALINGTENG MONKS, THE CUSTODIANS OF A HERITAGE THAT COULD DISAPPEAR FOREVER.