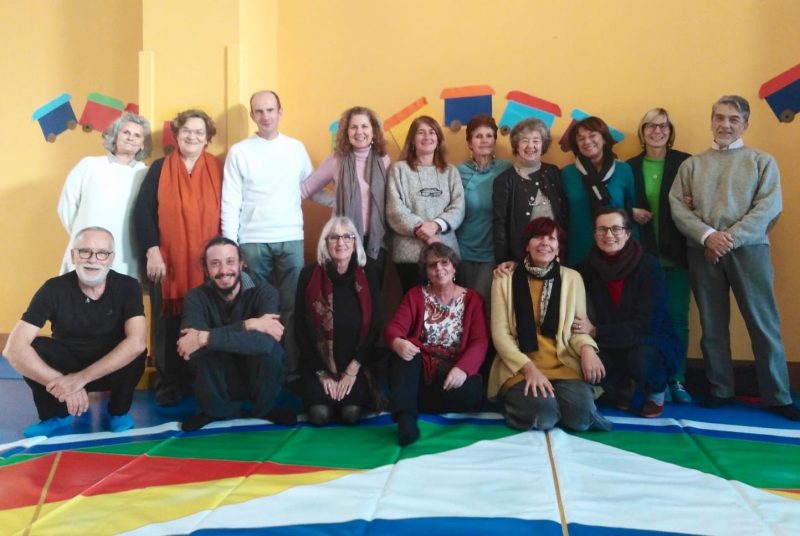 It is the beginning of January in quiet sunny Venice, which, after the incredibly high waters of November and December, has a magical light. What better way to start the new year than to find ourselves among practitioners and dedicate a weekend to learning and, above all, to practicing the Song of the Vajra! The course, postponed twice due to the meteorological situation in the city, seems to have finally taken place at the best time because the turnout is high and the atmosphere is magnificent.

This is a new course in the panorama of those organized by Gyamtsholing (Venice, Italy) and perhaps also by the Dzogchen Community: a course and a retreat dedicated to fully understanding the Semdzin of the Song and therefore its deepest meaning and, in particular, the timing of the Song of the Vajra, in its recitation and in the Dance on the mandala, its perfect rhythm as it was transmitted to us by our Precious Master.

To this end Anamaria Humeres, Santi Maha Sangha Base instructor, and Adriana Dal Borgo, international teacher of Vajra and Khaita dance, generously “tuned in” to us in an extremely useful and enriching way, offering precise explanations and exercises for which we warmly thank them.

So, at the gym of a Primary School near a large canal where we have been dancing for years, Anamaria brought a metronome that she set firstly on the long tempo (one beat for each timing) and then halved (one beat every two timings), and we sang the Song of the Vajra repeatedly, carefully respecting the detailed ‘score’ that Adriano Clemente prepared for the Community with the duration of the sacred syllables of the Song; a practice in a certain original way that does not depart, however, from the sound of the syllables, from the vibration they produce, and therefore from the practice itself. The opening and closing of the ‘rhythmic’ exercise was preceded by the Tun of the Semdzin of the Song of the Vajra without a metronome.

As Anamaria explained in the introduction to the course, the Song of the Vajra, transmitted to us by our benevolent Master, is the very essence of the Dzogchen teaching and is the expression of our primordial nature, of the state of Samantabhadra. Its syllables vibrate in the different chakras of our body, producing the effect that the practice must have when applied correctly.

In the words of the Master: “The Song of the Vajra is extremely important in Dzogchen teaching, as a key to all the methods we can learn. If you can truly understand and learn the Song of Vajra this is enough for you for everything. In the three series of the Dzogchen Semde, Longde and Upadesha, all important methods are related to the Song of the Vajra. If you only read the Song of Vajra you cannot notice it but if a Master who has that knowledge transmits it to you, then you can learn and understand”.

Attention to timing was re-proposed by Adriana with an apparently very simple exercise which consisted in repeating the tzam (the step of the Vajra Dance opening arm and leg) alternating right-left, moving around the outer edge of the mandala, one behind the other, placing feet on the ground according to the same rhythm previously used in Adriano’s ‘score’. Above all this was an exercise that could be done even by those who did not know the Dance steps and that practitioners less experienced in the Song were able to do even when many of us, in the afternoon, danced on the mandala with all the steps of the complete Dance.

The Sunday morning opened with a long practice of Semdzin and then the possibility of clarifying any doubts with Anamaria, while the afternoon was entirely dedicated to the Dance of the Song of Vajra under the guidance of Adriana, with six Songs one after the other accompanied by different melodies, including the first, without syllables, composed by Yeshi Namkhai, some melodies by Costantino Albini and Roberto Cacciapaglia, and the unique and sacred melody with the singing of the Maestro.

Each of us was able to enjoy His presence within us and with us on the mandala, in a dimension that we know to be beyond space, in the awareness of the precious, ineffable grace that has been receiving His Teaching.