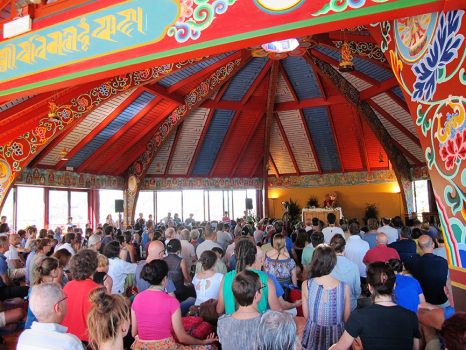 The second summer event at Merigar West with Chögyal Namkhai Norbu, the Shitro Retreat, took place over seven days, from August 26 to September 1. The topic of his Teaching was the Shitro of Mingyur Dorje, an important 17th century tertön or “treasure revealer” who received his pure vision revelations called Namchö at a very early age.

During the teaching sessions Rinpoche gave a clear overview of the different paths in Buddhism, dwelling on the importance of learning to be fully present. He spoke at length about this particular form of the Shitro, talking about the history of Mingyur Dorje and recounting his own fascinating dream with this tertön.

On Sunday, the Teacher kindly explained in detail and then gave the don dbang or introduction to the Shitro practice to the many students who were gathered there in the Gönpa as well as outside under the welcome shade of the brightly colored canopies.

On another day Rinpoche spoke about and led the Shitro practice, explaining how to help those who have died through it. Another day was dedicated to the Chang Chog ritual of purification for the deceased, by now an almost regular annual event at the Gar during which Rinpoche burns the names of the deceased to purify negative karma or obstacles. 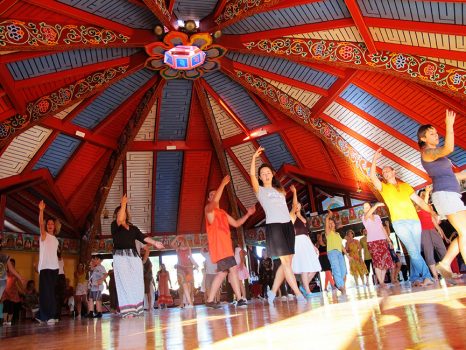 During the week long event, the very full daily schedule also included activities such as Yantra Yoga and Vajra Dance as well as afternoon presentations of the Gar and upcoming projects, the new Museum of Oriental Art and Culture, the Dzamling Gar project, and recent publications by Shang Shung Publications, the Dzogchen Community publishing house. And, of course, starting punctually at 5 pm each day the Gönpa reverberated to the sounds of Tibetan music and the pounding feet of dancers as Chögyal Namkhai Norbu presided over Khaita Joyful Dances!

An international group of more than 750 people attended the event, held under a clear blue sky and a hot summer sun that was only interrupted for an afternoon by a sudden and violent storm that drenched the Gar with rain and bombarded it with an angry flurry of hailstones that thundered down for 10 minutes.

The summer events at Merigar West officially drew to a close on September 2 with the Annual General Meeting in the morning followed by a highly enjoyable afternoon party, complete with a wonderful and ample buffet lunch with exotic cocktails, then an afternoon of entertainment, fun, and games with the Teacher. A great and fitting way to bring the summer activities to a close and spend some relaxing moments together with our Teacher.