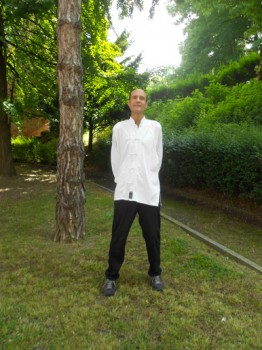 When you start to follow Dzogchen teachings, the main thing is that you are doing something useful for your life and that you are going beyond all kinds of limitations. This was what Namkhai Norbu Rinpoche taught during a retreat that I attended. These words resounded in my mind and gave me a starting point to carry out some research about some of the similarities between Dzogchen and Tai Chi (all the different styles of this discipline are characterized by slow circular movements) because I have found these two teachings helpful for me in all the circumstances of my life.

In my case I practice Tai Ki Kung every day and I have found it effective in balancing all the elements and energies of my body that are also related with mind. On my Tai Ki Kung diploma it is written: ‘Tai Ki Kung art of movements that follow the principles of nature for yin-yang balance and harmony of the five elements for living with vigor and good humor’. At first glance you immediately notice that these two practices are not really the same, but as master Ming says, “Looking at the differences between things is easier and is the normal way of thinking. Seeing the similarities is more difficult, and requires a deeper understanding, and this is not common.”

My Tai Chi teacher, Master Ming, began to study at the age of five with his great-grandfather who transmitted to him his deep understanding of Tai Ki Kung, of acupuncture, of massage, and of different systems of Chinese pharmacology. He learned the essence of external Kung Fu from his uncle and eight of the main styles of Tai Ki Kung from different masters. In 1963, he began to teach in different places in southwest Asia, going on to improve his studies. He was a disciple of Qi Man, the most important master of Qigong and of the well-known leader of internal martial arts, Lee Ying Ang. Later on he met the master Men Tou Zi, who brought him to leave the study of many practices and concentrate on one discipline only, whose quality was higher than the others, the Tou Kung. The same master encouraged him to research the root of the Tai Chi Chuan style and the spirit of its founder, Chan San Fung, discovering that everything is included in the source. This is the art of Master Ming who has taught the art of wellbeing in Europe since 1979.

In his early years Namkhai Norbu Rinpoche underwent an accelerated course of study, attending monastic college, doing retreats, and studying with renowned teachers, including some of the most important Tibetan masters of his time. He completed the training required by Buddhist tradition and received teachings from his uncle, Togden Ugyen Tendzin. At the age of sixteen he met master Rigzin Chanchub Dorge, who was also an expert doctor and transmitted to him a deep understanding of different healing systems within the spectrum of Tibetan medicine and became his principal Dzogchen teacher. Now in response to the many requests than come from all over the world he teaches Dzogchen teachings that are a source of happiness and inspiration for thousands of people.

I met my Tai Chi master, Ming Wong, in 1983 in Italy and later Namkhai Norbu Rinpoche in 1987. Then I discovered that they had known each other since 1979-80 in Naples when Rinpoche was teaching at the university. Master Ming told me these things and even now still has a very high regard of Rinpoche.

Among many of the aspects included in Tai Ki Kung practice one of the most important is the study and research of the balance between the forces that make up the famous symbol of Tai Chi. What is the symbol? In this regard Master Ming explains, “ It is like a union of two forces (yin-yang, light and dark, good and bad), two energies in which the boundary line is never definite or distinguishable, because one always contains a little bit of the other, like there is always something good in bad. “

It is very similar when Rinpoche says that we always remain within limitations of good and bad if we do not have the capacity to integrate these two aspects.

One thing that Rinpoche often reminds us of is that mind is like a monkey, never stopping, always creating every kind of fantasy. When a thought manifests we follow the fantasy of the mind and can never have realization. Therefore it is very important not to follow mind.

During one course Master Ming said about this topic, “When we practice meditation it is always important to find the right position. The aim is to calm the monkey. If the position is not right the monkey always wants to jump. When the position is right at the beginning the monkey jumps but, with time and training, little by little it will be still and under our own control. Monkey is very powerful. It helps us but can also destroy us. Everyone has to try to domesticate it. It has a lot of vitality and it is very difficult to calm down and as long as we are alive it always jumps. Yesterday I was very happy during the practice because even though there were a lot of people looking at you commenting in loud voices, laughing and talking, you kept on practicing, you controlled the monkey, even though it was jumping. I think learning this is very useful for everyone for living in the 21st century.”

Another key point that Rinpoche always reminds us of is that it is better to keep our feet on the earth and walk normally because we live in the dualistic condition and have to work with it. For practitioners all these things are connected with presence. 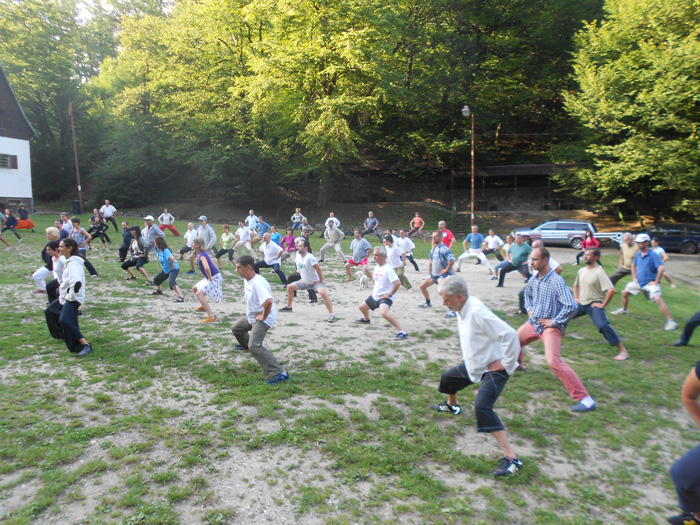 In Tai Chi it is useful to bring to mind the image of the tree, because it demonstrates a perfect way of absorbing energy. Its roots are deeply planted in the ground and absorb the strength of the earth. The dictionary gives the following definition of root: “the origin or source of every action, or quality etc.” This definition is also found in classic Tai Chi: “Every movement has its root in the feet, unfolds through the legs, is supervised from the bust, and manifests through the fingers. To distribute the weight in a uniform way on all the points of the feet guarantees a stable base for the whole body. In contrast, not distributing the weigh uniformly creates instability, tensions, and lack of force.”

Rooting is indispensable in all aspects of Tai Ki Kung: parries, attack and defense. From a defensive point of view a rooted person is very difficult to unbalance. The effect is like when we apply a horizontal force to a pole deeply rooted in the soil (that force will be diverted down into the earth). Neutralizing or diverting an attack from a rooted position reduces the risk of being pushed out of balance.

Sometimes at the conclusion of a teaching Rinpoche quotes the words of Buddha saying that life is like a big dream. I also quote a few words from Master Ming’s teaching during a course. “Our practice came from a dream. What is a dream? It is difficult to say and to interpret well. Is it reality or not? An ancient saying says that life is like a dream. Everyone has known someone who was here before and after suddenly disappears. Was it real or a dream? Sometimes we go to a place and then we return again after a few years and that place is no longer there. Was it true or was it a dream? Our practice comes just from a dream that creates Tai Ki Kung that literally means “big work”. What does big work mean? Immediately you might think of building a great building in a city, but our big work is a big work for living … a work that is the greatest and goes on for all our lives.

Of course the studies of Dzogchen and Tai Chi are vast and deep like an ocean and it is not possible to synthesize them in a few words, but what I have found to be essential in more than 30 years of practice is that both of these unbelievable Masters transmit to me how to do my best to have constant awareness in every moment of life and to transform the bitterness of life into wonder, even there is nothing to transform!

Daniele Rista has been a student of both Ming Wong and Chögyal Namkhai Norbu since the 1980s. He currently lives in Turin, Italy.