Jacqueline Gens is a poet who sometimes writes for Buddhist publications. 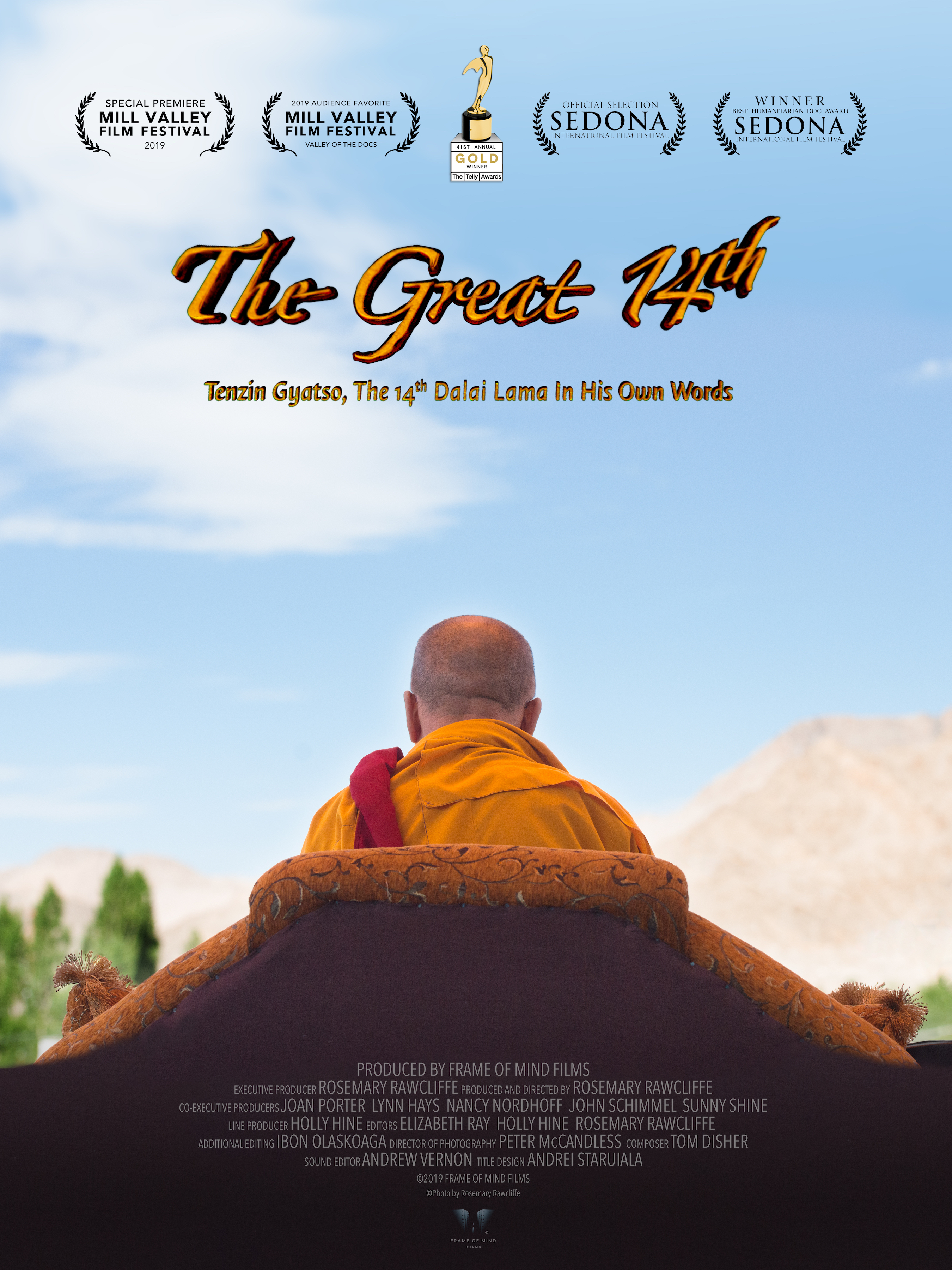 In an era of increasing nationalism with massive income inequality, a movie such as the “Great 14th Tenzin Gyatso, The 14th Dalai Lama In His Own Words”  offers an alternative to the deep uncertainties of our era. His simple message of compassion and empathy has been the milestone of his public face for decades. This is not a foolish sentiment but an authentic affection for all sentient life as a path of harmony and joy.

The Great 14th is unlike any other film about his life. Narrating his own story, he opens a window for us to peer into his deepest thoughts and feelings about the challenges and accomplishments he experienced personally and as the secular and religious leader of Tibet.

Considered among the oldest inhabited regions on earth and geographically isolated for centuries, Tibet’s contribution to the modern world is only beginning to be fully understood. Although poor in material culture and essentially a feudal society until the 20th century, Tibet developed a sophisticated culture of mind. The vast treasury of writings on philosophy, medicine, law, grammar, and visual arts is but the tip of the iceberg to match any great civilization.There are now thousands of translated publications from Tibet’s literary tome in numerous languages. At the pinnacle is Tenzin Gyatso, the 14th Dalai Lama.

The film’s appearance could not come at a more auspicious time than in the midst of a global pandemic when the world itself is facing unknown challenges. From seemingly apocalyptic climate disasters to wars, starvation, and disease with unprecedented sentient suffering, the Dalai Lama gives us an antidote to our fears through his message of uniting in a spirit of actualized global altruism.

The loss of his country is well known world-wide along with his role as an emissary of his Buddhist tradition and his tireless message of peace and compassion. However, what the film uniquely provides is an intimacy as though we are in the room with him. There is that unforgettable laugh ranging from snorkel to full belly laugh. We feel his sorrow for the suffering of others. We hear of his creative problem solving in his dream time. His meditative quietude stills our own anxieties. In fact, his entire life illuminates for us through example how to turn adversity into opportunity, how to manifest our full human potential. He is no deity but a beacon of light in the darkness of ignorance which shows us how we too can serve others through an awakened heart. In his mind no institution, religion, or ethnic culture alone can serve humanity unless individuals cultivate inner peace through awareness in a spirit of ethical secularism.

Central to the film’s point of view is the gradual democratization of Tibetan society in exile and the ideas that shaped the Dalai Lama’s early belief that no one person should hold absolute power. Originally much of the footage in The Great 14th came from conversations with the film maker starting more than eighteen years ago, morphing into conversations and research for a feature film No Time for Kings. Inspired by his abnegation as a political leader, the present documentary arose as a preliminary to the compelling feature film based on a true story.

The back story of The Great 14th and No Time for Kings is the Dalai Lama’s 2011 separation from the deeply embedded theocracy ruling Tibet for the last four centuries by giving up his secular political role. Now retired at age 84, he has left the fate of Tibetan society in the hands of Tibetans themselves whom he prepared well during his life in exile.

Among the most remarkable, one might say mind blowing aspects of the film, is when he recounts his lifelong exploration of governance in an effort to create reforms to bring Tibet into the modern world. With his characteristic investigative mind, he sees in Socialism, even Marxism, aspects of altruism. Archival footage in 1954 of him in China at the invitation of Mao seeing his open enthusiasm in a desire to reform the inequities of society caused me to want to protect his youthful naivete knowing what was to come for his country a few years later.

Accompanying his narrative, charming home movies of his boyhood and young adulthood reveal the playful person behind his formal status with an inclination to mingle with ordinary people. In one segment of archival footage taken at Norbulingka, the summer palace, the Dalai Lama, tells us how he liked to play with the sweepers who passed on gossip about state officials even showing him a peep hole to spy on the Regent of Tibet. Early on he observed the corruption inherent in the concentration of power in one person which became a catalyst for continuing the reforms begun earlier by the 13th Dalai Lama.

The Great 14th shows us the deep well of humanity one person can accomplish. What was a great tragedy for the loss of Tibet in 1959 became the Dalai Lama’s liberation from an inauthentic life to a life of reality and opportunity to mingle in the world as Tenzin Gyatso, the monk sharing with us the notion of interdependence between all of us rather than isolation and strife. His vow to benefit all beings for as long as Space continues can be our vow too—so badly needed in these times.

Frame of Mind Films Is known for a number of important documentaries about Tibet including the Emmy award winning Women of Tibet: A Quiet Revolution and Women of Tibet: The Great Mother, inspired by the Dalai Lama’s mother. Jacqueline Gens is a poet who sometimes writes for Buddhist publications

The film features the Dalai Lama as both subject and narrator, providing a uniquely intimate view of his life story and personal philosophy. It includes largely unseen private archives, such as rare footage of the Dalai Lama in Tibet in the 1950s and his early years in India in the 60s.

Global Virtual Premiere
In celebration of the upcoming 85th birthday of His Holiness the 14th Dalai Lama, Frame Of Mind Films® will launch a global virtual premiere of their latest film The Great 14th: Tenzin Gyatso, The 14th Dalai Lama In His Own Words. The film will be available to stream for 48 hours from June 27, 12:00am PDT thru June 28, 11:59pm PDT. It is offered as a gift with the option to make a tax-deductible donation. Pre-registration is required at www.thegreat14th.com/screening-registration.

“The bond of trust [His Holiness and Rosemary] formed through these years is clearly evident in the comfort and ease with which the Dalai Lama fields questions.”

To reach a broader global audience, a portion of the proceeds from this premiere will go towards completing the translation of the film into 14+ languages. For additional information and to view the trailer, please visit www.thegreat14th.com. His Holiness celebrates his 85th birthday on July 6th.