The warm sun in the sky above Dzamling Gar illuminated the island of Tenerife for all fifteen days of the Mandarava retreat. While in Europe the cold of February was still at its height, the practitioners of the Community could lie on the beach in the afternoon before the dances, while the bravest dived into the cold Atlantic Ocean for a swim.

The retreat began on the day of Losar, Tibetan New Year, with a long practice of Mandarava followed by a Tibetan style breakfast. Before lunch we danced in front of Rinpoche and then ate together under the big white tent. In the afternoon the Master and practitioners dedicated themselves to playing Pagchen, dice and the game of Liberation until after sunset. And then the real retreat started. It began in the early morning with Yantra Yoga followed by a teaching session and Mandarava practice. Starting at four o’clock we sang and danced with Rinpoche. At six we were in the Gonpa for the Vajra Dance.

During the teaching sessions Rinpoche spoke about the essence of Dzogchen, but also explained the origin of the practice of Mandarava and how this should be done. The Master also talked about how this practice saved his life and how he continues to do it every day. The last part of the session was devoted to the practice, almost always the short version, but some days even the long one. Whoever wished could, after the dance, do another practice session under the guidance of Nina Robinson, and take a second Chudlen pill. 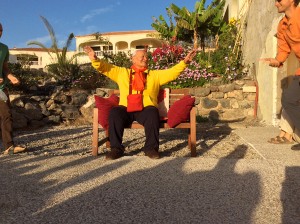 Coming and going to the teaching sessions and the dances the Master always stopped to rest on a bench in the middle of the Gar, where some practitioners would tell stories or anecdotes, or he himself would give brief informal teachings.

The penultimate day of the retreat, after the Ganapuja, there was a raffle and an auction. Many people won some great prizes, some of them once, others even five or six times.

During the retreat, to support the construction of the Gonpa, some bracelets and necklaces that Rinpoche had made were also auctioned and were highly successful.

Even the dances were an important part of this retreat. There were all kinds of dances, in circles, in lines, or simply scattered as people learned them more and more enthusiastically.

Life at the Tenerife Gar is always very intense. Even when there is no retreat, there are main courses of Yantra Yoga, Vajra Dance and Santi Maha Sangha, but also collective practices, pagchen workshops and explanations of dances. 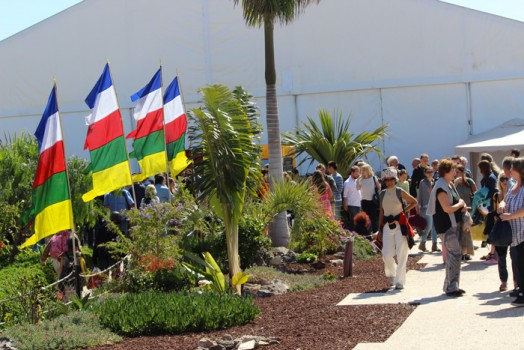 After the retreat of the Tenerife sky was obscured by the haze of the Calima as the wind began to rage bending trees and plants. But now the sun is shining again.