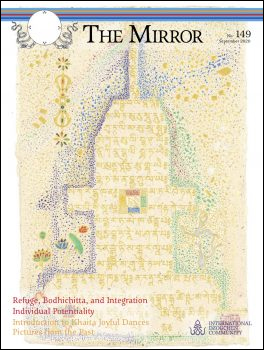 We would like to inform you that The Mirror 149, September 2020, is up on line and ready for downloading at melong.com and dzogchen.net.

As usual, the issue has a variety of articles inside, including two teachings by Chögyal Namkhai Norbu — Refuge, Bodhichitta, and Integration given just before the New Year of 2018 at Dzamling Gar, and explanations on Individual Potentiality given on 21 September 1990 at Merigar.

As an editorial you can find an informal talk by Adriano Clemente, one of Chögyal Namkhai Norbu’s earliest students and the main translator of his works, given after leading a recent Ganapuja at Merigar, to those present and in webcast.

We also offer a short message from Marco Baseggio, Atiyoga Foundation chairman, with reflections on the legacy of Chögyal Namkhai Norbu, as well as updates from ASIA Onlus and SSI UK, followed by followed by the transcript of a presentation of Khaita Joyful Dances and their Deep Meaning given by Adriana Dal Borgo after the Anniversary of Guru Padmasambhava on 29 July.

The issue presents updates on development and continuation of activities from Dzamling Gar, Merigar West, Merigar East, Kunsangar North, Namgyalgar, Tashigar North, Tsegyalgar East, as well as an announcement of the new features of the Sangha App.

On page 29 Gino Vitiello shares his talk on Pluralism and Religious Identity: The Path of Fraternal Dialogue given within the interreligious meeting group called “The Spirit of Assisi”, for Namdeling, the Ling of Naples, Italy.

We offer two reviews — one by Alexander Studholme of Sam Van Schaik’s Buddhist Magic: Divination, Healing and Enchantment Through the Ages, and another one by Giorgio Dallorto of Tibetan Silver, Gold and Bronze Objects and the Aesthetics of Animals in the Era before Empire by John Vincent Bellezza.

Then in Pictures from the Past, a series recounting retreats, travels and moments spent with Chögyal Namkhai Norbu, Joe Zurylo talks about helping Rinpoche prepare the first Mandala for the Vajra Dance at Khandroling in 1990, while Prima Mai shares her account of learning and studying the Dance of the Vajra when Chögyal Namkhai Norbu first began give instructions about this teaching received through his dreams in the early 90s.

Artists in the Dzogchen Community this time features Giorgio Dallorto and his calligraphy art presented by Christian Correnti.

“I may have approached calligraphy as a lazy pupil, which over time has become a precious tool for studying and deepening the Practices. Ultimately it has become a belated but profound homage to the great calligrapher and Master who was “the king of the Dharma jewel of the sky”.

‘Lives of the Great Masters’ recounts the story of Patrul Rinpoche, a vagabond and one of the most renowned spiritual teachers of the last century. Born in 1808 in Dzachuka, a nomad area of Kham, he was recognized as the tulku of Palge Samten Phuntshok, a master previously living in that area. Later, several great Lamas recognized him as being an emanation of Shantideva and also the speech incarnation of Jigme Lingpa.

The Youngest Khaita Instructor, Elia Bernadoni, shares his story of his meeting with the Master in the ‘How I Met’ feature.

“Every time that I dance Khaita I remember Rinpoche, and for every dance that we danced with him I have some memory. For each dance it is different.”

With love,
The Mirror Team