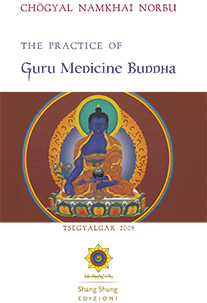 The Practice of Guru Medicine Buddha
by Chögyal Namkhai Norbu

This booklet contains two practices of Medicine Buddha, together with explanations on how to apply them, as transmitted by Chögyal Namkhai Norbu at Tsegyalgar East, Massachusetts, USA, during a retreat that took place in 2008.
The first practice is centered around the figure of Padmasambhava in the aspect of the Buddha of Medicine. The second is a Medicine Buddha practice from a terma teaching of Namchö Mingyur Dorje.
The root of this Ugyen Menla practice is The Invocation That Fulfills All Aspirations, a terma discovered in a reliquary by tertön Manglam Zangpo Tragpa in the temple of Rulag Trampa Gyang. Manglam Zangpo Tragpa gave this teaching to Chödag Rigdzin Gökyi Demtruchen (1337-1408) and in this way it became well known. This teaching encompasses thirteen precious secret instructions, among which the secret instruction regarding Ugyen Menkyi Lama was discovered by tertön Ngari Panchen Pema Wangyal (1487-1542) in the reliquary of the statue of Vairochana that was the main sacred object of the upper story of Samye monastery.