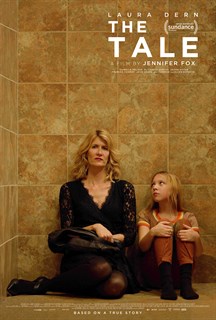 Her work has won her numerous awards as a documentary filmmaker with an unique approach that features innovative interview techniques of far ranging cultural diversity and inclusive presence she shares with her camera’s eye in a give and take between self and other. Through the prism of differing points of view, her films often capture in minute detail her keen field of perception that illuminate the present moment with crystal clarity and a largess found beyond the merely personal or one-sided. Memoir, for many of her films, acts as the catalyst to these larger issues.   At her best she’s an artistic original in so many ways even though at times her preoccupation with her own angst might seem self-indulgent. But then, truth be told, all artistic expression is personal.

The Tale fully employs all these techniques in addition to a dynamic investigative inquiry between present and past individuals such as, grown-up Jenny in conversation with young Jenny and others. Part mystery, part drama, the film slowly unwinds the tight cocoon of narrative the young Jenny wove about her so-called “relationship” with an older man while still a child and how the mature Jenny courageously unravels it to reveal a classic case of manipulative “grooming” leading to acts of inappropriate sexual behavior between an adult and child. I leave the details to watch in the actual film now streaming on HBO TV.

The Tale is her most intimate film to date and yet its universal theme resonates in perfect timing to an emerging social context that addresses this mostly secretive world of sexual abuse beyond brute facts. Especially synchronistic is its initial premier simultaneously with an international empowerment by women characterized by the “Me Too” movement and global awakening to no longer remain silent.

For those of us (men and women) who have experienced sexual or any kind of abuse, for that matter, the film offers insight into how we craft our stories into narratives that elude uncomfortable recognition of personal trauma and hurt by reshaping them into more tolerable story lines redefined in the abstract while denying the visceral or reacting with a lifetime of blame. I am reminded here of the Irish poet W.B. Yeats, who once said that poets are “hurt into poetry.” No less true here for this filmmaker whose exploration of her own “hurt” is at the epicenter of the film, The Tale.

Equally true is the knowledge that the body never forgets even on a cellular level. Recent studies on the effect of the holocaust thru generations indicate that trauma is passed down genetically from parent to child. In other words, it lives in us, in our bodies even if our minds are not cognizant. The film handles this in sensitive and subtle ways as the child Jenny’s romantic story is at odds with the physical rejection she experiences vomiting after each act.

As a practitioner now in my third decade of this journey what I have come to respect is the beginning of the beginning–that first baby step from the comforting arms of ignorance. This film triggered for me many responses and deep consideration from a Buddhadharma perspective. How does one relate to deep personal hurt? When asked to teach, the Buddha initially declined but in the end agreed. At the cornerstone of his teachings he began with the Four Noble Truths – the first being the Truth of Suffering. His gesture to signal his awakening was the earth mudra of touching ground. I am always moved in reflecting that his enlightenment was not witnessed by angels or gods but humble earth – a stable ground.

Many would have us regard that all, which happens to us, is unreal like a dream. Others even more evolved might have us simply rest with relaxed mind in the moment beyond time and cause and effect. These justifications, when realized, of course, lift us beyond personal suffering. And yet, as Issa, the great Haiku poet expressed upon the death of his beloved daughter:

Somewhere between the pendulum of negation and eternalism is the eye of the storm of our personal suffering from whence the beam of awareness can incinerate the lump of coal we so carefully harden our hearts around to protect ourselves. Until we recognize the truth of our own suffering can there be compassion for others or progress on the path?

Why is it important to go into the cellar of our darkest hurts? I have known accomplished practitioners of meditation who remain clueless about their own suffering in which they condemn themselves (and those around them) to act out decade after decade the same drama, or drink themselves into oblivion, torture their Vajra brothers and sisters because they can not forgive themselves, or drag the chain of a deep shame enveloped in a heavy cloud of depression.

The Four Noble Truths are the cornerstone of realization – the recognition of our suffering, understanding its cause, ending our suffering, and finally the path to liberations. Unless we embrace this, we will just play out the same old patterns without awareness stuck like a warped record.

It is said that a bodhisattva feels the suffering of others like an eyelash in one’s eyelid, a constant irritant. This is the spot of sand that turns our suffering into a pearl of wisdom.

A film like The Tale shows us how we can allow that grain of sand to awaken our full potential. Be brave – that’s the message of this film and look into the mirror of your mind.