Shang Shung Publications is happy to announce a new book:

The Teaching of the Birds
Translation from Tibetan into Italian, Introduction, and Notes by Enrico Dell’Angelo, Drawings by Dhawa Dhondu
English Translation, Foreword, and A Tribute to Enrico by Maria Simmons 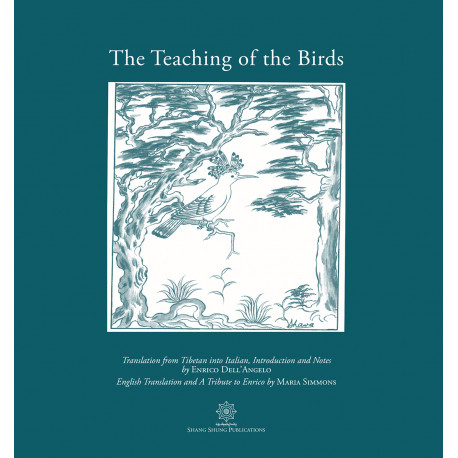 The Precious Garland of the Teaching of the Birds is a delightful allegory in which profound Buddhist truths are uttered in a poetic manner by a bodhisattva cuckoo and the council of birds attending his teachings. This English edition is a translation of the Italian rendering by the late Enrico Dell’Angelo (1954-2016) of the original Tibetan text. Our wish is to honor his memory with the presentation of this book.

The text is in the native homiletic folk tradition of literature and classified as belonging to the literary genre in the style of aphoristic verse known as Legshe, songs of advice, popular among a wide Tibetan audience. Although this enlightening tale with a cast of birds has been regarded as anonymous it is interesting to note that recently a number of scholars have come to agree that it can be attributed to the immensely gifted Tenth Karmapa Chöying Dorje (1604-1674).

Enrico’s discerning translation of this fable and its evocative illustrations drawn to his specifications encourage us to imagine the birds as they soar over pristine Himalayan snow peaks and mountain cascades. Flocking together, they alight deep in a forest where they present themselves to the Wise Cuckoo and one by one, each with its quirks and heartfelt declaration, receives his Dharma advice.

Illusions similar to dreams, such are lives in transmigration.
Whatever one sees, what is its substance?
The elegant dwellings built in earth, stone, and wood,
The wealth that provides food, clothing, and ornaments,
The armies and the attendants that surround the mighty,
All are examples of illusion, evanescent like a rainbow in the sky.
Deluded are the beings that consider them real.

Relatives that converge, aunts and uncles, nephews and nieces, brothers and sisters,
Spouses that come together, wives and children,
People from the same land, neighbors who gather merrily,
Have the nature of friendships in a dream, like fleeting encounters among travelers.
Deluded are the beings that consider them real.

The illusory body composed of blood and lymph,
The hidden inclinations elicited by misdeeds in the past,
The mind that develops various attachments,
These are like flowers in autumn or clouds passing through the sky.

– From the song of the cuckoo, the Great Bird

This beautifully printed book can be ordered from the webshop of Shang Shung Publications:
https://shop.shangshungfoundation.com/en/books/881-the-teaching-of-the-birds-9788878341371.html