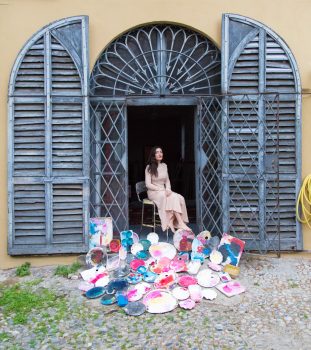 When I was a child I used to entertain myself for long periods of time creating fantastic worlds, drawing, playing, dressing up, telling imaginary stories and drawing imaginary visions. Nothing in my games touched on reality.

My father, Roberto, a composer and musician, certainly influenced me in my path as an artist. For me art has always been at home, not something abstract and distant but very concrete and part of daily life. Through his work and himself as an individual, my father taught me how to translate emotions into creation and, most of all, he gave me a love of and discipline for work.

Through him I understood on a profound level that art comes firstly from the heart, and that mind and “rational thought” only come later on. In that way you arrive at the emotion.

As for my education, I attended a Montessori primary school, which gave me a free vision of the world and I can say that it has influenced my choices over the years. Later on I went to art school where I defined my direction in choosing art as a profession and where I met extraordinary professors who nurtured my passion for art. I then went to university at the Brera Academy of Fine Arts, choosing painting as my course of study. I believe that the people I met during the educational years of my life have played a fundamental role in my life choices.

My parents have been following Chögyal Namkhai Norbu’s teaching for many years. I think they met Rinpoche for the first time in 1988, when we children were very young and I’ve grown up with the teaching ever since. I think it’s the greatest good fortune you can get. It’s a fortune that is probably not a coincidence but a kind of karma. Having such close contact with such a high Master as Namkhai Norbu is the base on which my life rests and obviously the starting point of my work.

I say this because for me painting starts from contemplation, from silence, from seeking presence in the moment I am living, from self-observation. It is a “sacred” and solitary occupation for me: shapes, colors, and images, are born and manifest themselves in the “empty” space of the canvas.

My research into painting is not in any way conceptual, but rather starts from the void of space / time and arrives at describing something that belongs to everyone. In the studio nothing moves, everything is still, motionless, and the action bursts out suddenly and “Creates”. This action in itself brings something unique and unrepeatable, each time different and new.

Painting means going out of oneself and translating one’s own feeling into form by choosing “the invisible” rather than the “visible”. In a society where there is an excessive and violent competition toward Visibility, painting with its strong and at the same time calm gestures, with its surfaces of strokes of infinite stratifications bring me back to observing, to the “contemplation of every moment”, to the “magic of life”. 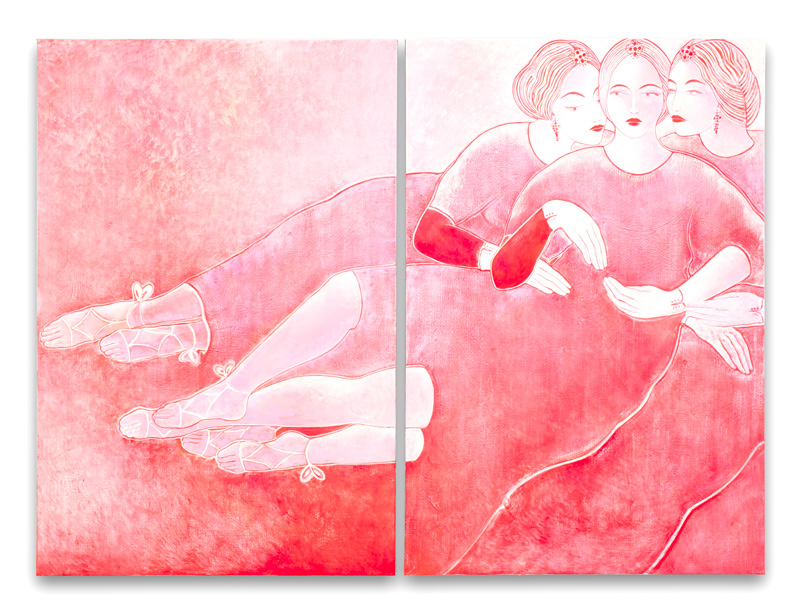 My work focuses on women. My figures live on very large canvases suspended in a dreamlike dimension; the metaphysics of fairy tale and enchantment.
There is nothing real in the way they are portrayed; they are figures that belong to another time. Ethereal and at the same time monumental, they seem to emerge from the dream dimension of an ancient and “eternal” world.

They support each other through a secret equilibrium that originates from the human contact that guides and is the common thread and point of origin of the composition. Even the position of the hands has a symbolic meaning even though it is random. The essential closed forms and rhythm give the figures a contemplative dimension in a message of solidarity and empathy with the women in the world.

For me painting is the window on the inner world of each of us. Also for this reason I choose never to give titles to my works so as not to contaminate them with the world of words and meanings that each of us sees and wants to give when looking at a painting.

Painting is a window on a world where everything is possible; where there are no rules if not those dictated by the work itself. It is a bridge to connect to our inner feelings that, in this digital age we are living in, we struggle more and more to have deep contact with. For me it is the continuous “journey” between my inner and outer world. Backwards and forwards! 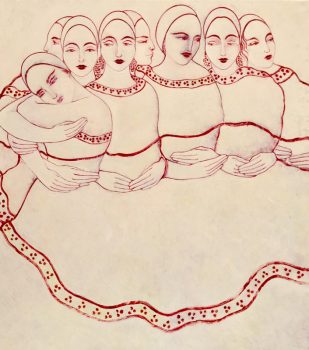 I’ve been inspired by many artists. They are like the companions of an adventure that you always carry with you and depending on the period you are living in, you have a closer “friendship” with one or another of them … such as Balthus, Matisse, Casorati, Domenico Gnoli, Piero della Francesca, Giotto, Constantin Brancusi .. just to name a few. The list would be long.

I had my first personal exhibition in New York in 2007 organized by Fabrizio Ferri, a photographer who immediately believed in my work. From there I had several exhibitions in spaces and galleries. In 2011 I participated in the Venice Biennale in the Italian pavilion.

I am currently working in Milan, my city that I love very much. Being able to work in Italy is a luxury for me. I love this country and even with all its difficulties I would choose it over and over again. I work with a gallery based in London and Beijing. I recently participated in the Beijing International Art Fair. 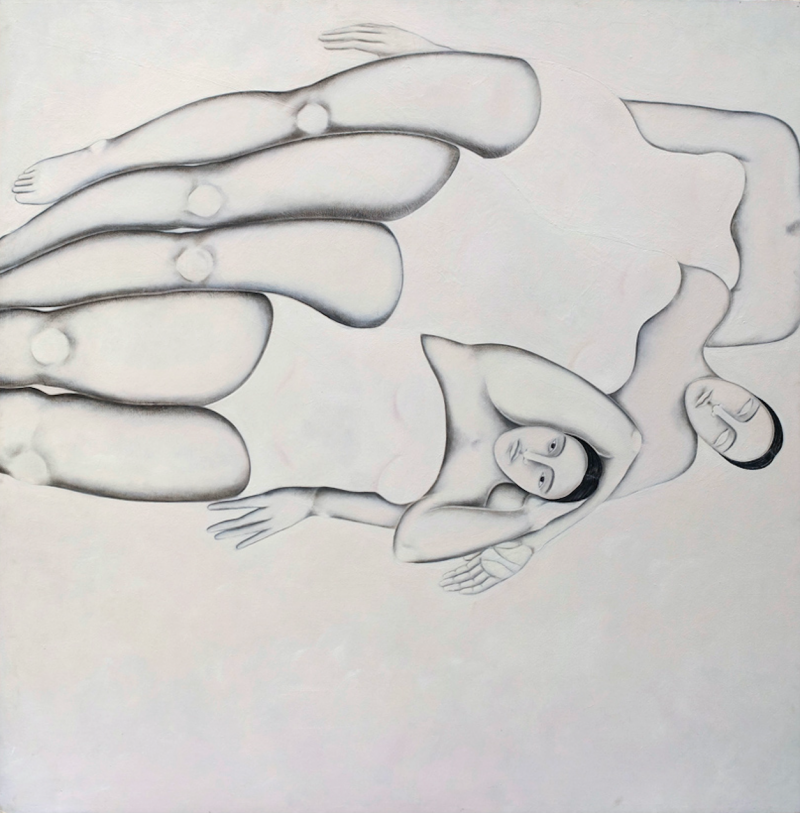 In addition to painting I’ve been collaborating on different fashion and design projects. In my opinion this type of collaboration is very important: getting out of my own world to create new combinations with other worlds such as design and fashion. When I have been asked, I have always considered it an opportunity, a test of the strength of my work outside its normal context. We live in an era where distances have been torn down and the boundaries between the different worlds are increasingly subtle. We need to get out of our tracks without fear and open ourselves to this “new world” that has been breaking in faster and faster every year.

For this reason I accepted to collaborate in fashion collections with prints of my paintings, such as the one used by designer Caterina Gatta. I’ve also created design for chairs and velvet wallpaper with my figures.

My plans for the future? I’m going to participate in an exhibition in London opening on October 4th at The Palm Tree Gallery, 291 Portobello Road, London.