This article is the first in a series to recount memories of experiences, retreats, travels and other moments spent with Dzogchen Master Chögyal Namkhai Norbu during his travels and teachings across the globe. 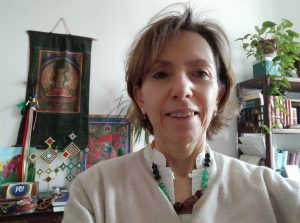 In the 1970s Chögyal Namkhai Norbu taught Yantra Yoga at the gym of Vico Palasciano in Naples. Although very young, I was interested in receiving that teaching and that was how I met him. After a few years he would become my professor of Tibetan language and literature at the Oriental University of Naples.

In his lectures, besides the specific themes of the language, Rinpoche devoted much attention to the presentation of the origins of civilization, culture and history of his country. He began by revealing the history of Shang Shung and Bōn, cosmogonic theories about the birth of worlds, myths about origins, and continued with the spread of Buddhism in Tibet. He entered into life stories, anecdotes about both Tibetan and Mongolian traditions, his studies and teachers, his specific experiences, even in spiritual practices. Thus he began to create in many of us that imagery that would accompany us for many years of our lives.

In 1981 Rinpoche organized his first trip to Tibet since he had left in the 1960s. He traveled with his 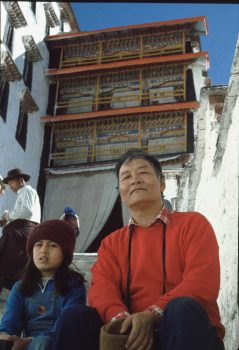 Rinpoche and his daughter, Yuchen, in Lhasa in 1981

Italian wife Rosa and his two young children Yeshe and Yuchen. From Beijing, the flight to Lhasa involved two stopovers in Xian, and Chengdu in Sichuan.

Having learned of that trip, being then a scholarship holder in Shanghai and having obtained a specific permit, I went to meet them at Beijing airport. Rinpoche, even though he knew Chinese, asked me to facilitate relations with the local authorities, and to accompany him on the journey.

In Chengdu I went to the Air China agency to confirm tickets for Tibet, and he invited me to buy one

for me. I set off accordingly with them. The next morning we landed in Lhasa. On the way to the city he told us of his memories and in particular of how the scenarios had changed. We were accommodated in the house where two of his sisters lived, together with his niece Phuntsog Wangmo, not far from the center, and from whose garden you could see an edge of the Potala.

He was immediately welcomed by masters and the faithful. He sat on a slightly raised platform and there he welcomed an endless line of people coming to pay homage to him and prostrating themselves in front of him. Rinpoche entertained and exchanged words with everyone. Sometimes he turned to me, sitting behind him, and he told me what they were talking about. They talked, but at the same time they laughed, and he explained to me how their attitude was due to the realization of how everything is unreal. 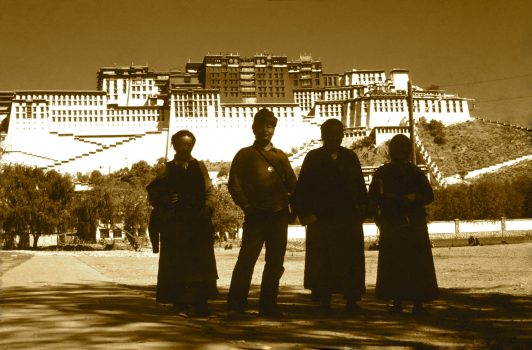 During my work in China, I happened to find a pair of very large, thick and heavy antique pecha, traditional books on rice paper printed with wooden matrices with bōnpoillustrations, at the Beijing flea market. The pages were black with ink, with white characters. Back in Italy I gave them to him as a gift. He asked me, astonished, where I had found them and he told me that the strong smell of ink they still emanated reminded him of his youth at boarding school where he suffered from severe headaches due to the hours spent pouring over similar texts. He told me that he would put them in the Museum of Asian Art and Civilization in Arcidosso, then under construction. 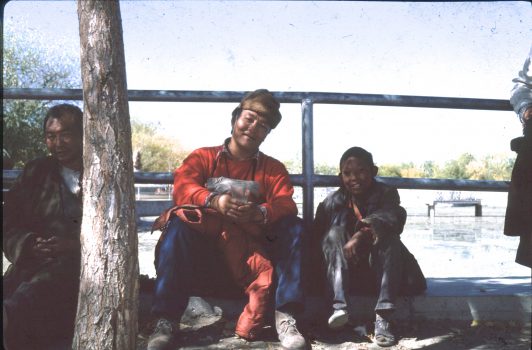 As I was one of his students at the Oriental University, I then asked him to give me a title for the thesis of my degree. Being a student of a four-year course in two languages, Chinese in addition to Tibetan, I was interested in a theme that would concern both countries. Rinpoche proposed that I concentrate on the figure of the 6th Dalai Lama, who lived in the eighteenth century, (when the first Chinese protectorate was established in Tibet) and gave me part of the Tibetan text of his secret biography. So it was that I came to discover how Tsang Yang  Gyatso (tshangs dbyangs rgya mtsho), like his illustrious predecessor, the Great Fifth, was a celebrated Dzogchen practitioner. And indeed Rinpoche would later include his image in the frieze at the Gönpa at Merigar (The Temple of the Great Contemplation), which pays tribute to all the great practitioners of that discipline.

Enrica is a student and disciple of Chögyal Namkhai Norbu, currently retired, she collaborates as a translator for Shang Shung Publications and The Mirror.