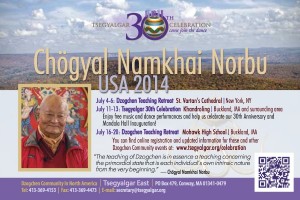 This coming summer marks two important events for Tsegyalgar East. One is the 30th Anniversary of the Dzogchen Community in America, founded by Tibetan master Chögyal Namkhai Norbu, and the other is the inauguration of the Universal Mandala Hall on Khandroling, our retreat land in Buckland, MA.

To celebrate these events we are planning a three-day festival from July 11-13, 2014. As part of our celebration, there will be free music and dance concerts, presentations about our Community and a formal inauguration of the Mandala Hall.