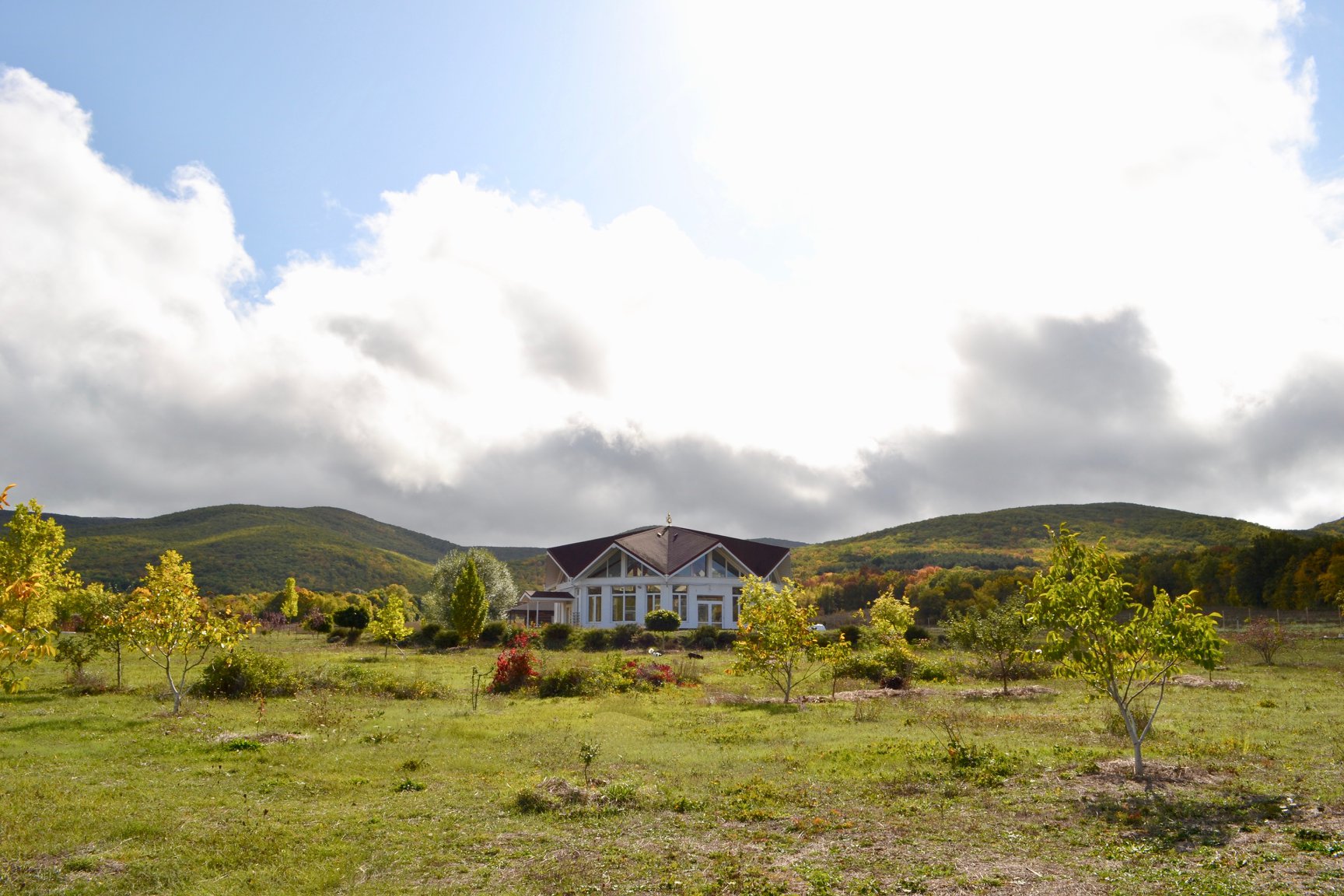 It’s not easy to sum up the results of this year as most of our plans were cancelled or re-scheduled, nevertheless life goes on despite the unstable situation in the world. When ongoing events are cancelled, time and energy for inner work are released so during almost the whole of last year many transformations took place at the Gar and a lot of activities were done which we would like to share it with you.

Our Vajra kin from Poland, Greg Ladra and Kasha Dmyterko, who work in the field of landscape design and have successfully realized many projects, developed a project last autumn to create green spaces near our Stupa and offered the project to the Gar for free. We had asked them to develop a project for the Gar that would consider the particularities of the climate, and they included local easy-to-survive plants which do not need much water and also fill the space around the Stupa in a harmonious way.

Landscape project for the Stupa. 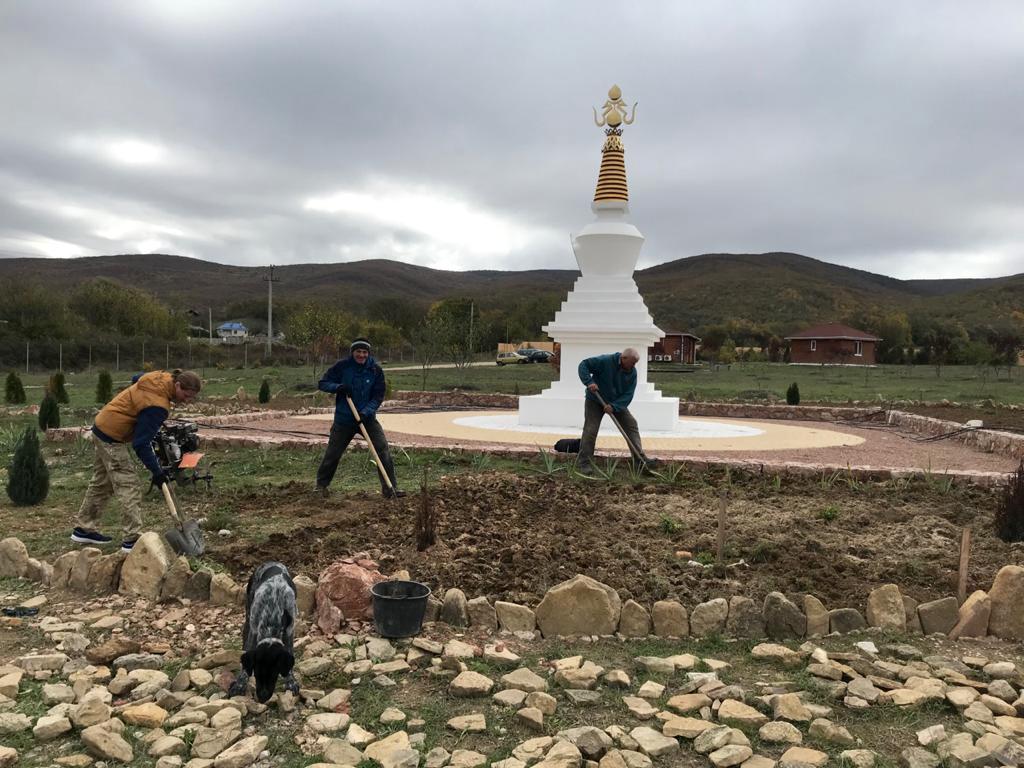 Working on the area near the Stupa of Kunsangar South.

The project onsite was realized by our gardener Natasha Gerasimova and gekö Alexey Shadrov. Last autumn we planted cypresses and junipers, then we organized a small nursery-garden, and not long ago some fully-grown plants were bedded out. We waited for the soil to have suitable conditions as the last couple of years in the Crimea have been very dry. We created a drip watering system in this area that will support plants in summer and in the months of drought. 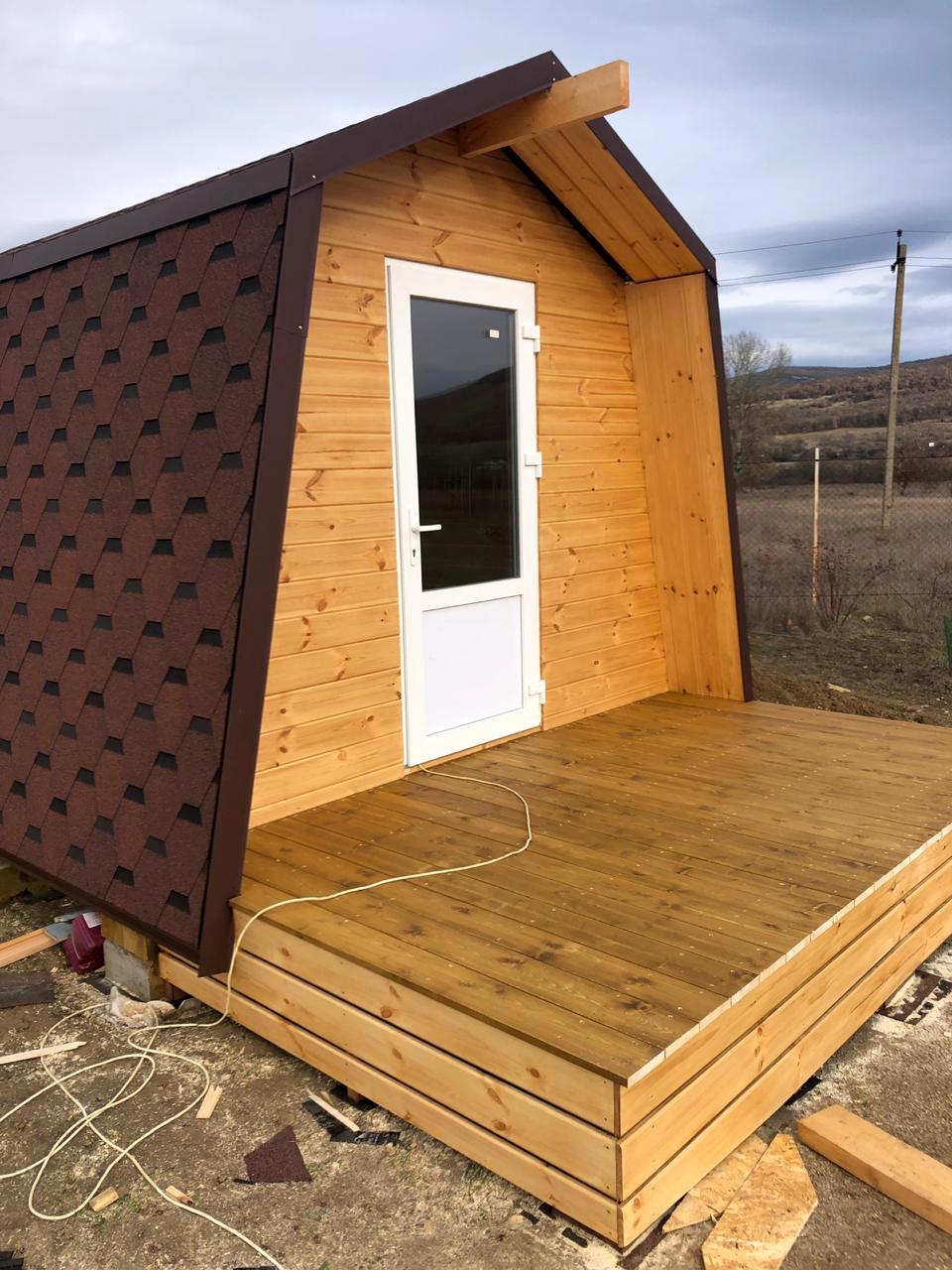 The camping area is also being developed. We organised space inside the summer kitchen for people to use and store food in a more comfortable way. The foundations of the pergola were strengthened. Thanks to the groundskeeper Igor, Sergey Sedler and gekö Alexey a test wooden mini-house was built. The house was very popular during the summer. In future we plan to install several such houses in the camping area – it will be a warm and comfortable alternative to staying in a tent.

Rinpoche’s house, which now serves as a dormitory, was renovated and some construction flaws were eliminated. The groundskeeper Igor, gekö Alexey, karma-yogis and workers reinstalled the external finishing of the house and patched up cracks between panels. Now the house is more warm and beautiful!

Rinpoche’s house (which now serves as dormitory) before and after renovation.

In the summer we survived a loss that was not easy for us – our beloved friend and guard dog at the Gar, Daddy, was hit by a car. He had lived at the Gar for seven years, worked as a guardian and was our true friend. Daddy will always remain in our hearts.

However, a new resident has appeared at the Gar – a puppy from a hunting breed that we call Tashi. In summer Tashi grew bigger and stronger, got used to sleeping in a doghouse, became friends with cats and now pursues hares so that they do not eat young plants. 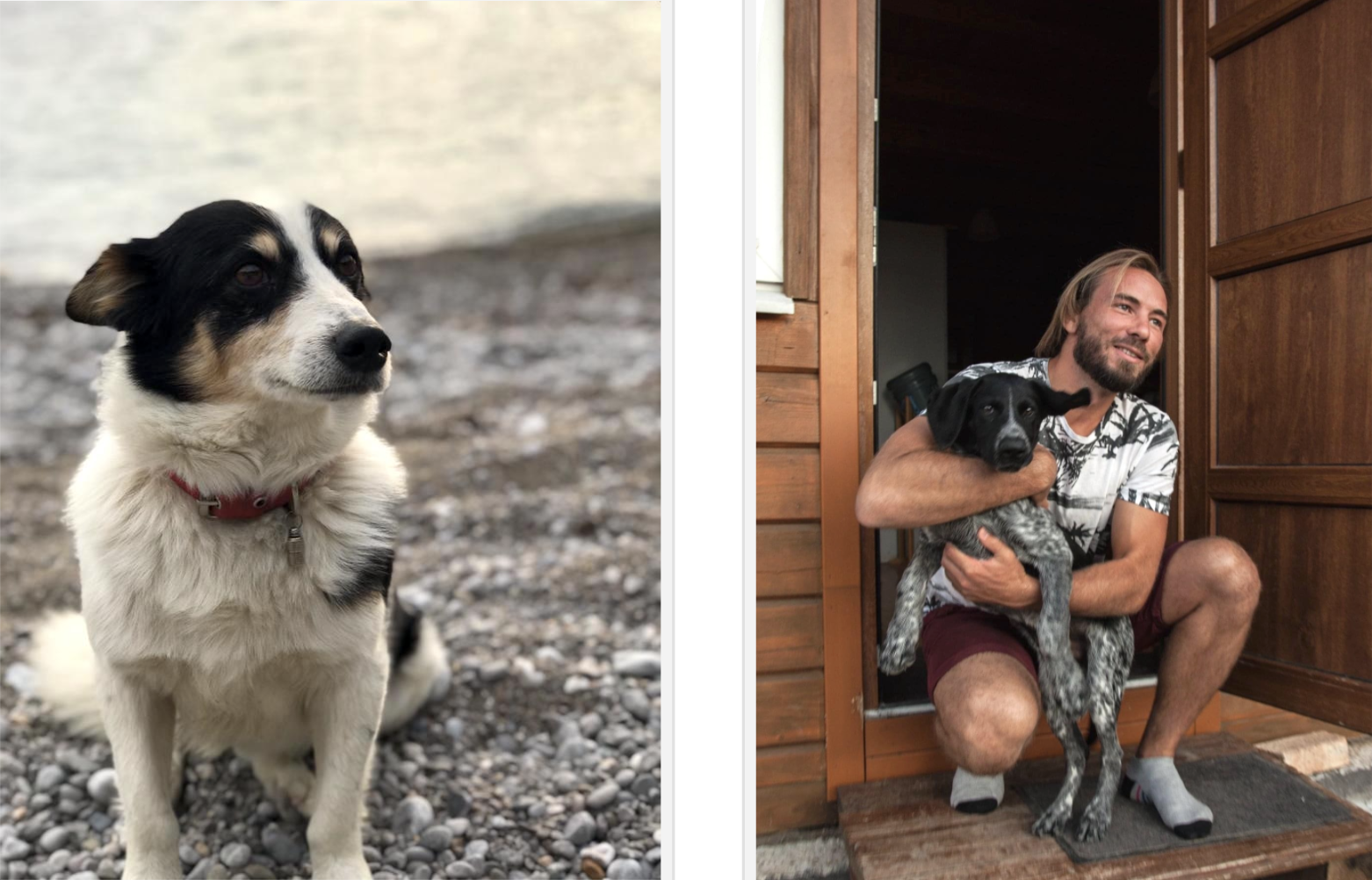 Daddy (on the left) and a new dog Tashi with gekӧ Alexey.

Although the summer and autumn retreat programs were cancelled due to quarantine measures, people came to the Gar to do personal retreats as soon as limitations for individuals were removed. The dark retreat house was in big demand and was booked for weeks, and for many people it was their first dark retreat experience. We received feedback with gratitude from practitioners. People were happy to practice and stay at the Gar. Many of the visitors to the Gar offered their labor in their free time: some would help with cleaning, others with making the place more beautiful and we are very grateful for that. 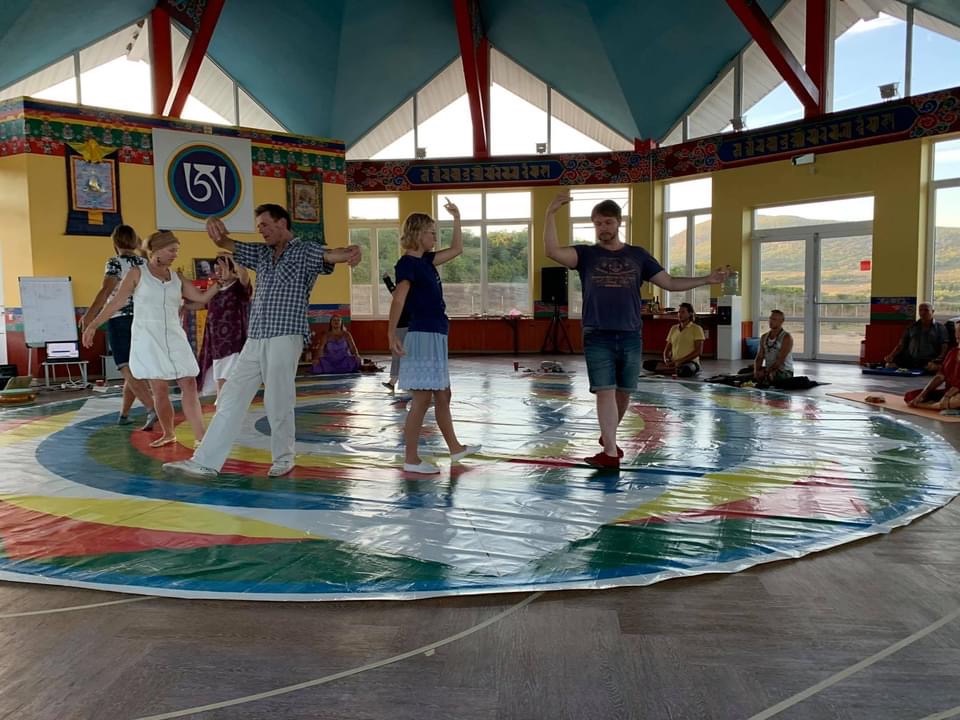 Visitors dancing in the Gar.

On Rinpoche’s anniversary, besides webcast practices, there was a vast Sang and Serkyem offering and a Ganapuja. Some people from a friendly community called Yeshe Khorlo arrived. They offered a precious gift to the Gar – a sprout of the Bodhi tree’s seed.

In 2019 a relic, a fragment of a wool robe that had touched Rigdzin Changchub Dorje’s body, was given to the Gar by Dzamling Gar. It was offered to Dzamling Gar by one of Rinpoche’s close disciples. Now it has been placed with the salt that touched Rinpoche’s body, and remains in a Stupa in the Gönpa of Kunsangar South. We express our gratitude to Raimondo Bultrini and the Dzamling Gar Gakyil. 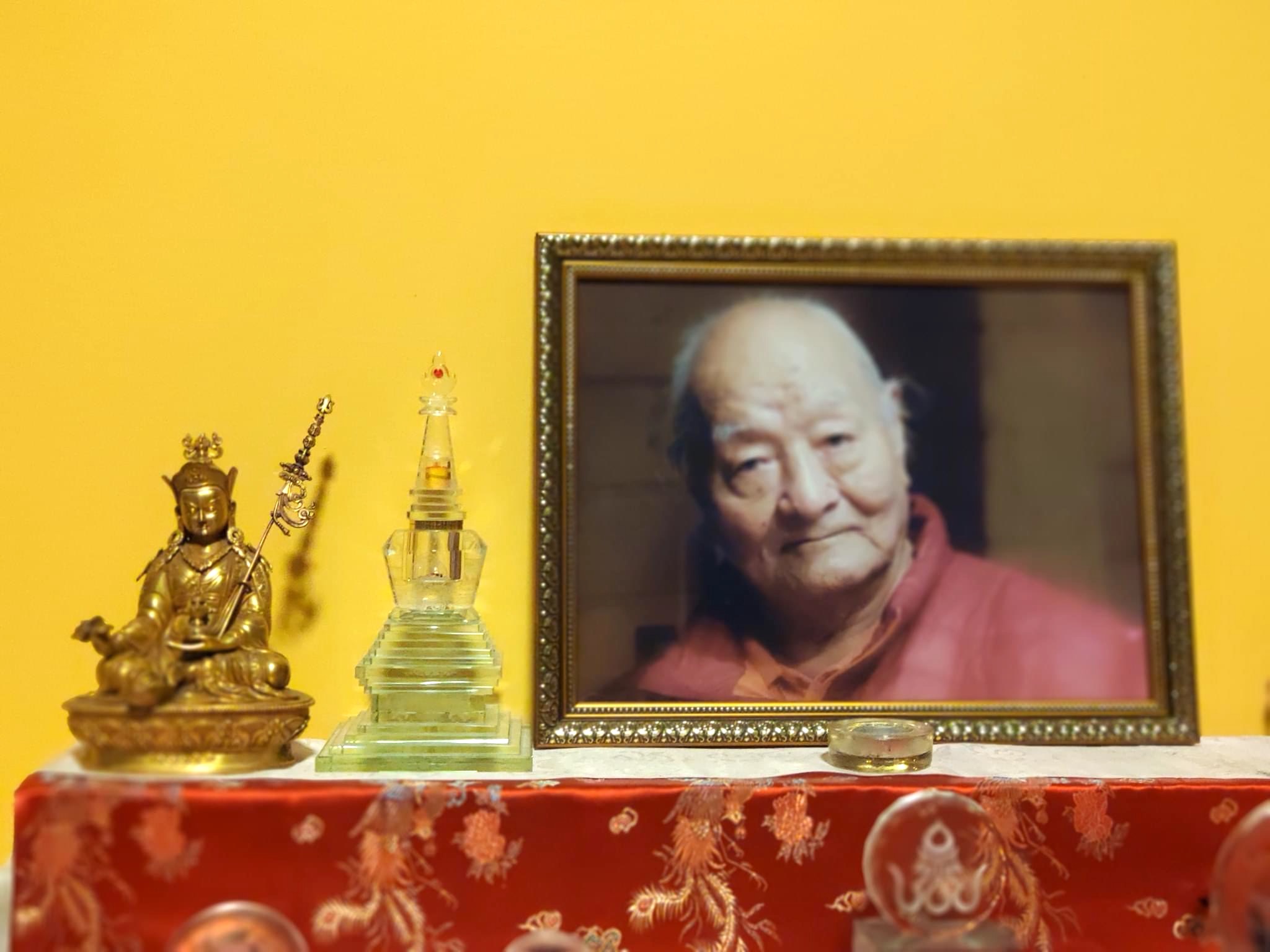 Stupa with relics on the altar at Kunsangar South Gonpa.

In summer the old well started to provide water to the Gar once again when we noticed that its water level had risen. Now the water systems of the Gar have become more capacious.

A joinery has appeared in the Gar! An open part of the warehouse has been renovated: we laid down a floor, installed cold-proof walls, windows, made a door by ourselves, set up the wiring and organised a working area. Now the carpentry work can be done more easily and in a more comfortable way. There are already the first carpentry creations that we will describe below.

Building a joinery in the ware house (left), view from the inside when joinery is completed (right).

In the new joinery we made some benches for the area near the Sangkhang so that many more people can sit there. The benches turned out to be comfortable and attractive.

It’s difficult to make plans for the next year yet as this year has shown us that all plans may change. We are carefully watching the current changes in the world and will plan our activities when we have more clarity about the upcoming summer. Thanks to everyone who has supported the Gar with their assistance, time and good intentions!