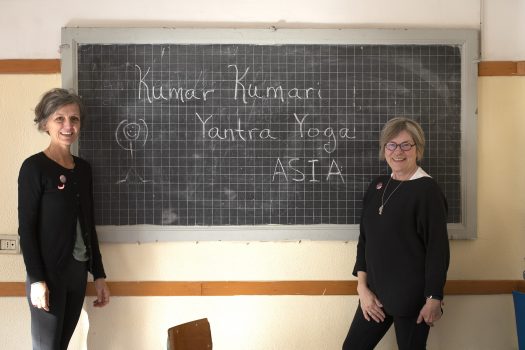 Imagine 70 children (4th graders) going to public school in Rome, Italy and there encountering two yantra yoga teachers ready to present an hour lesson of  Kumar-Kumari Children’s Yoga as part of their school day. Yes, this can happen and is happening here in Rome and also in Naples.

Thanks to ASIA’s recent project “Distinti ma non Distanti”,  (a project implemented in Italy, funded by the Italian Agency for Development Cooperation AICS, with the main aim of raising awareness and spreading three of the most important values of Buddhist philosophy: empathy, non-violence and interdependence), Kumar Kumari’s yantra yoga is presented  to four different 4th grade classes in two different public schools in Rome.

We (Laura Graci, Yantra Yoga and Kumar Kumari instructor and Constance Soehnlen, Kumar-Kumari teacher) start our Wednesdays at Plesso Bonghi, near the area of Vittorio Emanuele and Colle Oppio.  From 9:30 to 11:30, we have three back-to-back classes in a small, well lit gym.  Each class has from 22 to 25 children.  We then walk over toward Via Cavour, stopping to ‘refuel’ and eat something, for our afternoon class 2:30 to 3:30pm at the Elementary School Alfredo Baccarini in the Esquilino –Monti area. 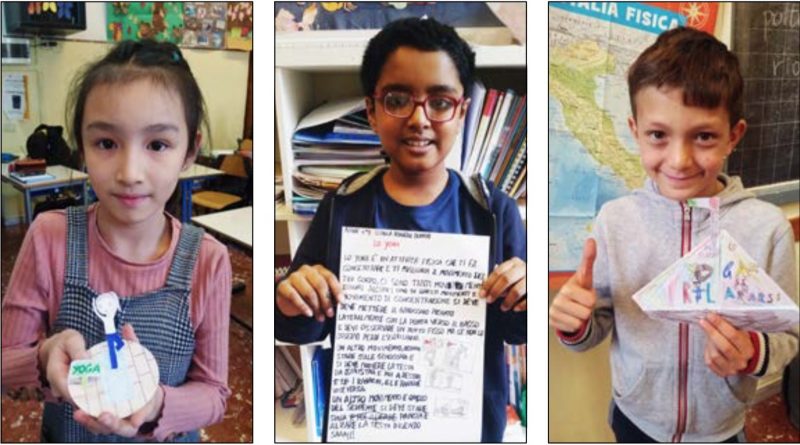 Every group we have seem to jump out of their shoes, leaving them behind in the corridor as they run to claim a yoga mat, preferably next to a favorite friend or two.  We have introduced the yoga mat as ‘one’s own space’, what you can consider a ’small peaceful island’.  From the beginning we started with simple guidelines for the class:  Take care of and observe yourself in this space, listen and follow the best you can, concentrate on the sounds and your breathing as you coordinate movements.  This framework encouraged collaboration and respect between each other.

This is, of course, ideally speaking.  Now the ‘real picture’, as we add 8-9 year old boys and girls with their energy and emotions. All the groups loved to talk and joke around.  Sometimes a group would find it hard to settle. We found after a week or so that ‘warm ups’ didn’t help so much, rather we started with the opening Kumar-Kumari exercise, the beginning breathing, finding the sounds and movements a way to calm and set the tone of the class.  A choice of two or three tsijong movements was a perfect way to loosen up.  We used different children as assistants in front of the class who soon reminded their classmates to ‘keep your backs straight and shoulders open, relaxed’.   Over the months, we added new movements (from the lungsang and sandal groups) and learned the yantra, cobra.

We decided, after a couple of weeks, to divide the class and work in smaller groups (in the gym and a small theatre space) Here we concentrated on first practicing the sounds, then coordinating those sounds, breathing in and out to the set of movements.   We could see and hear each child individually and work more closely in a smaller group.  AND in smaller groups, it was easier to experience a quieter dimension, which led to silent moments.  Laura used a set of small cymbals to call attention to a moment of peace. One of the groups naturally sat cross-legged, some in the lotus position to do what they considered ‘yoga’.

Definitely one of the most difficult elements of the class was lying down for a pause or final quiet moment at the end of the class.  Quieting your body and mind is truly difficult in our ACTIVE lives.  And children have so much to do between, schooling, homework, afterschool football, karate, dance, chess, music class…we can go on and on.  We hoped by introducing silence and this calm space that the children found a time to do nothing and feel what was happening. 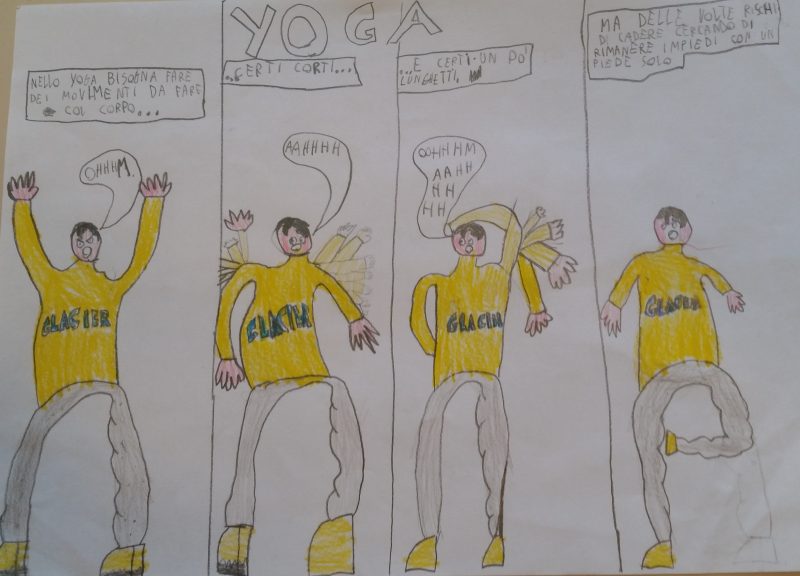 As a way to encourage reflection, the class would often end with a big circle asking each child to describe in one word how he/she felt after yoga. We worked in all the classrooms a couple of times over this 2 month period asking the children to explain through drawings, words, whatever form, what kumar-kumari yoga is all about. This picture wasn’t for their teachers or adults.  Instead we asked that they explain yoga to other children, maybe one of the younger classes in the school.  This work in progress was so revealing, fun, and creative.  We now have a book to leave for each class as a memory of this experience.

All the children benefited. Some children who find it hard to settle or have particular difficulties, are calmer overall. Working on the energy level through the sounds and breathing, have, we hope, made each child more observant of how they move and feel.

In a way, we can say we have given a small treasure to each child. And of course we have to give our thanks to our teacher, Chögyal Namkhai Norbu, for this precious teaching.   Thank you ASIA for letting us be part of it, to ASIA director Andrea Dell’Angelo, to Lorenza  Sebastiani, project manager of “Distinti ma non Distanti’, to Roberta  Marranca, Stefano Ricco and the other people involved.  We send our gratitude to Patrizia Vari who coordinated for Plesso Bonghi and Baccarini, to the 4thgrade teachers and children who all helped us! This wonderful project has opened the doors to teaching Kumar Kumari yantra yoga in the public school system here in Italy.  May this be only the beginning! 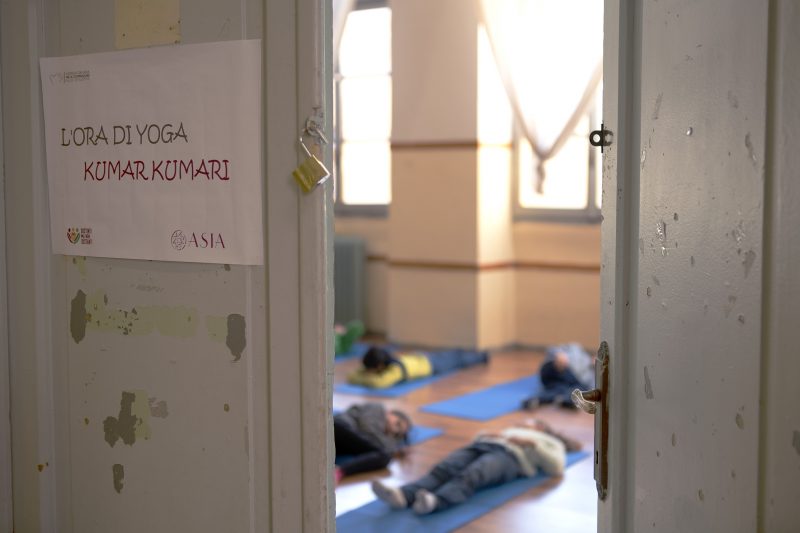