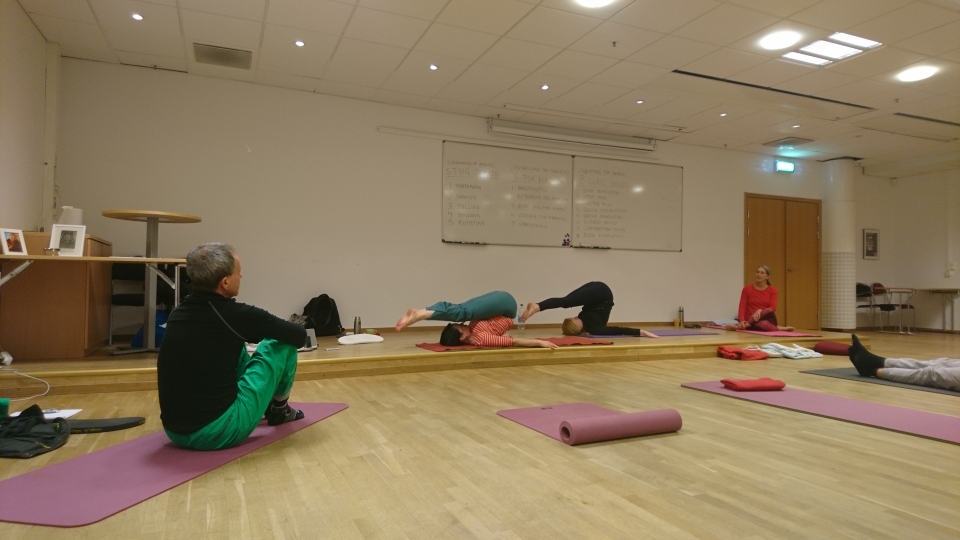 We had the great pleasure of having Yantra Yoga teacher Laura Evangelisti here to supervise a first level Yantra Yoga course by Pernilla Liedgren and Eva Sigeholt in the south of Sweden. We were very happy that 19 people registered for the course in spite of the course being so close to Christmas. Half of the group were totally new to Yantra Yoga and half knew some Yantra Yoga. The attendees learned very well and fast in spite of the intense program during the short time we had together. During five days we went through the history, linguistical explanations and information about Yantra Yoga. Also several warm ups, the Nine Purification Breathings, Five Tsigyong, Eight Lungsang, Five Tsadul with it’s Pranayama, the first and second series of Yantras and Rhythmic Breathing.

On the second evening we also did a nice Ganapuja together with eight people attending.

Laura was very generous with giving us personal corrections and lots of advice of how to teach and communicate Yantra Yoga. She gave very clear and thorough explanations when needed which was immensely valuable for us and the group.

Next course planned in Malmö, Sweden is with Maaja Zelmin February 23-25, 2018, where she will teach Harmonious Breathing and Yantra Yoga.

We hope that Yantra Yoga will flourish and spread in all of the Scandinavian countries in the near future and we wish all a continuous Happy healthy year 2018!