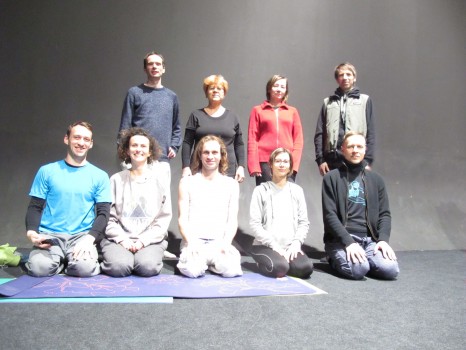 Today we want to share with you some news about Yantra Yoga practice in Poland and particularly the course with Evgeny Rud held recently in Warsaw.

In recent years there has not been so much Yantra Yoga activity in our community. In contrast, the beginning of the year 2016 has been exceptionally intensive.

Firstly since January there have been several basic courses with our local instructors Marek Macko and Adam Wąś held in Warsaw, Cracow, Gdansk and other cities so many people could make their first contact with the Tibetan yoga of movement. Secondly we started regular practices led by enthusiastic practitioners in Cracow, Warsaw and Gdańsk.

An exceptional event was the intermediate course with Evgeny Rud. The retreat was held in a cool theatre, “Trzyrzecze”, where we could feel like Tibetan yogis and drama actors at the same time. During the course participants understood better and developed the quality of full breathing in both preliminaries and the series of Yantras. All participants had the chance to challenge their perspective of breathing and verify the influence of movement and attention on breathing and vice versa. The programme included also practice of Pranajamas. The entire programme was built on a base of deeper theoretical background and then experiencing the principles of Yantra Yoga in relation to body voice and mind. Thank you for a wonderful course Zhenya!