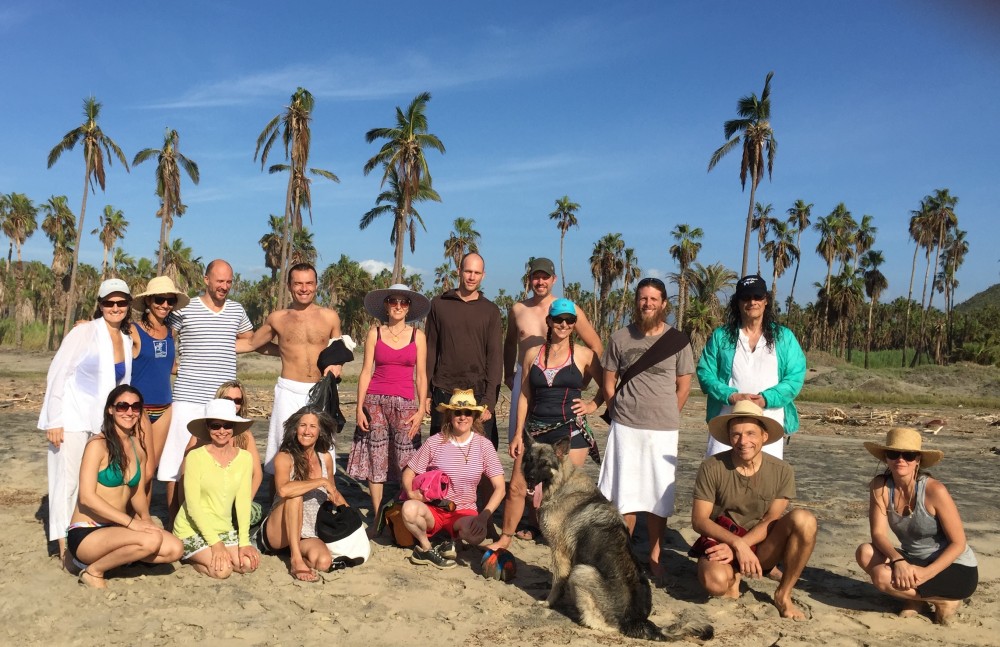 Happy students at the beach

Weeks before the scheduled Yantra Yoga training with Fabio Andrico, Hurricane Odile made landfall on the Baja Peninsula.  Many carriers cancelled flights both into and out of the heavily damaged airport at San José del Cabo. At Tsegyalgar West, repairs were underway but accommodating both a yoga retreat and preparations for Rinpoche’s visit in December seemed dubious. Still, we were told the retreat would go on, and arrangements were made to host the training some two hours away at Pachamama (“Earth Mother”), a small yoga retreat hotel in the Pacific town of Todos Santos.

Damage was extensive throughout the area – shredded walls in and around the airport, battered hotels, gas stations ripped open like banana peels – but recovery was well underway by the time we arrived.  To the credit of retreat organizers and friends of Tsegyalgar West, Pachamama turned out to be extraordinary. Accommodations were comfortable and modern with the beach at our backyard, an infinity pool, and close proximity to town for outings. 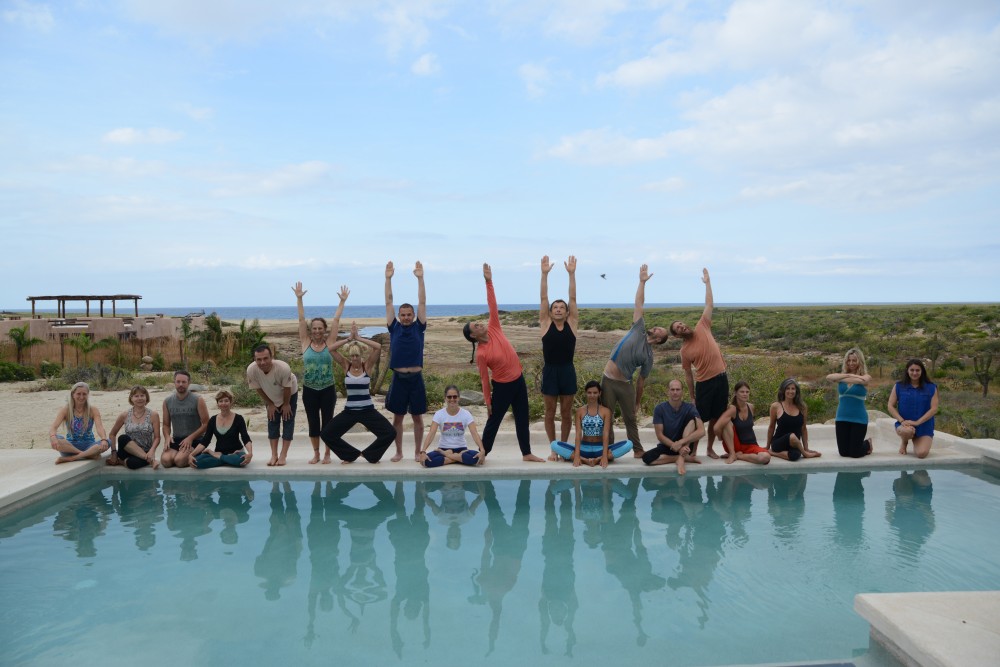 Half moon around the pool

Thirteen Yantra Yoga trainees in all arrived from various parts of the U.S. and Canada ranging in ages and nationalities. We slept in remarkable two-person teepee guesthouses, permanent structures built to survive hurricanes to come.  Seven teepees arranged in the courtyard close to the main house, each with two beds, a bathroom with hot showers and plenty of fresh towels. The teepees were cool during the day and cozy at night – and adding to that the ocean drone, and it’s safe to say collectively we slept well. 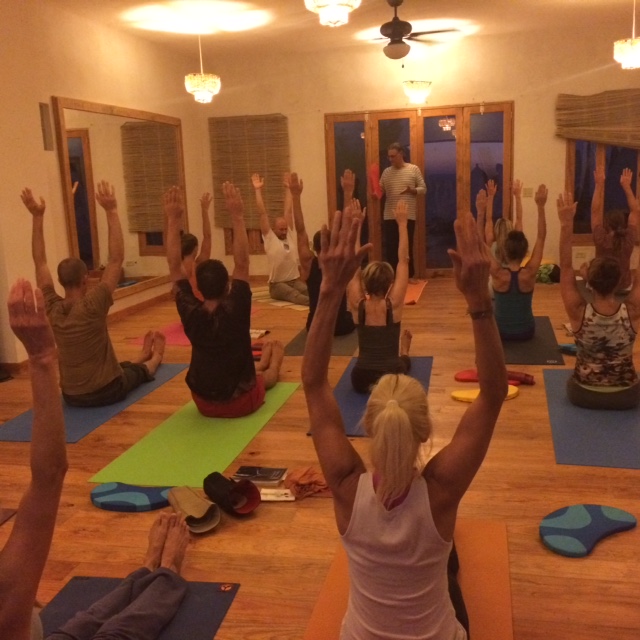 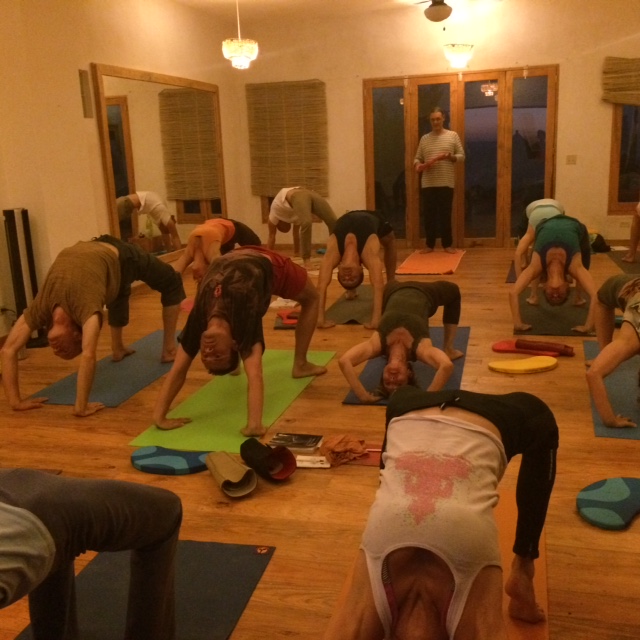 Practice began each morning shortly after breakfast and ended at lunch. We had a modest break, and then a practice session in the afternoon followed by dinner. The fresh papaya, guacamole, homemade salsa, and fish tacos in particular were outstanding.

The practice space was nearly ideal – lots of windows, clean, with a breeze from the ocean as well as dramatic sunsets for evening practice. If I tell you about the mosquitos that attacked us for the first hour at the start of each day, it’s only because I don’t want you to think we had it too easy (we did!). We had whale watching opportunities almost daily, and Fabio was always generous about indulging us time to spot.

The beach was beautiful, but swimming presented a challenge: high surf and a steep drop off. Most kept to the pool. But one afternoon we hired a bus to drive us to a nearby beach thought more suitable for swimming – someplace where we could wade into the deep more slowly. Playa de las Palmas was located down an unmarked dirt road just outside of town, and it too was gorgeous. We walked from the parking area, through palm trees, and into a large inlet. To the left were the remains of an old fisherman’s shrine carved into a steep rocky cliff, and far off to the right was another line of steep cliffs being thrashed by waves. Despite the ominous tone set by those extremes, the middle looked perfect. That assumption proved erroneous, however, when riptides took several swimmers out against their will for longer than they liked. Still, all were returned safely and in time for the afternoon’s practice.

The Mexican holiday Day of the Dead also coincided with our retreat, and on that night another group outing was organized into Todos Santos. It was a simple night out with drinks and a show at the local Cultural Center.

On our last day at Pachamama, some with early returning flights headed to the airport while the rest of us piled onto the bus again – this time for Tsegyalgar West and Fabio’s special class on “breathing.”  We traveled for some time with the Sea of Cortez to our right before turning onto a smaller road which lead into the mountains and arrived just before sundown. There were spectacular views throughout and a waxing moon tracking us from behind. At the Gar the Geko of Tsegyalgar West, Nanay, welcomed us with bowls of vegetable soup, sweet potatoes, guacamole and chips, red wine, and hibiscus tea. After dinner, we followed solar-lighted trails through the trees back to our sleeping quarters, the “casitas.” We stargazed from our balconies and then slept well. 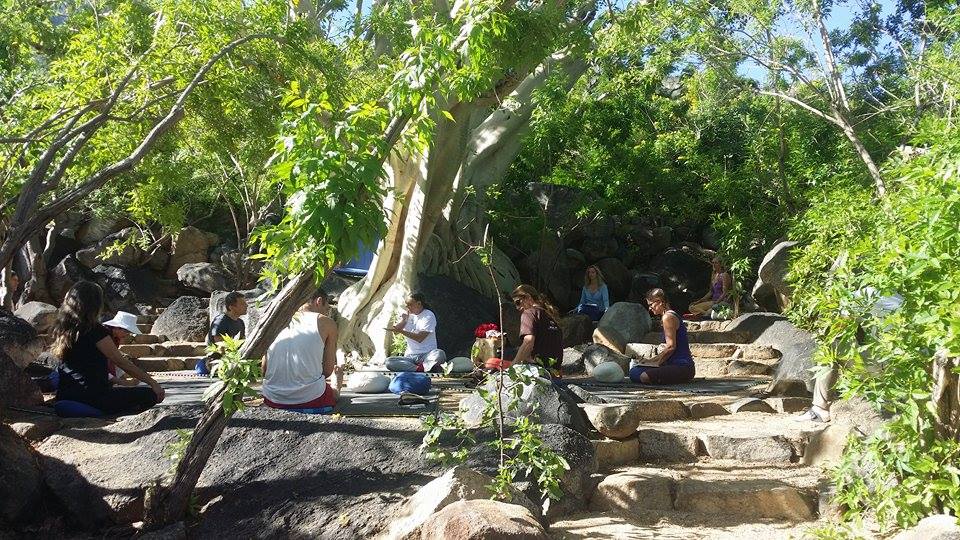 Fabio teaching breathing under the tree at Tsegyalgar West, Baja

In the morning, Mexican coffee with clove was already prepared and ready for us along with fresh fruit, eggs, yogurt, and delicious spicy granola. Work was already underway nearby on the Gonpa in preparation for Rinpoche’s visit in December. The mood was cheerful in the kitchen – an open structure with thatched roof and gravel floor. For all purposes, this seemed to be the heart of the Gar with stone lined trails spiraling out in multiple directions. Large wooden tables and benches for family meals sat on one side of a divider – a long bar separating the dining from the kitchen. Everyone took turns helping with meal preparation.

The Gar is a 3000-acre mountain range with lovely views, and because of the hard rains, everything was green and blooming with bright yellow and red flowers. Even the dirt, which was deep red, seemed to radiate. And maybe this was why everyone’s mood lifted. I heard many people say as much. It wasn’t that we weren’t happy before – we were – but the Baja Gar has that extraordinary effect. Waterfalls with connecting streams and pools were accessed by a trail near the kitchen and were surprisingly warm. And a larger waterhole down the main road from the Gar winds through remarkable pre-Colombian paintings! 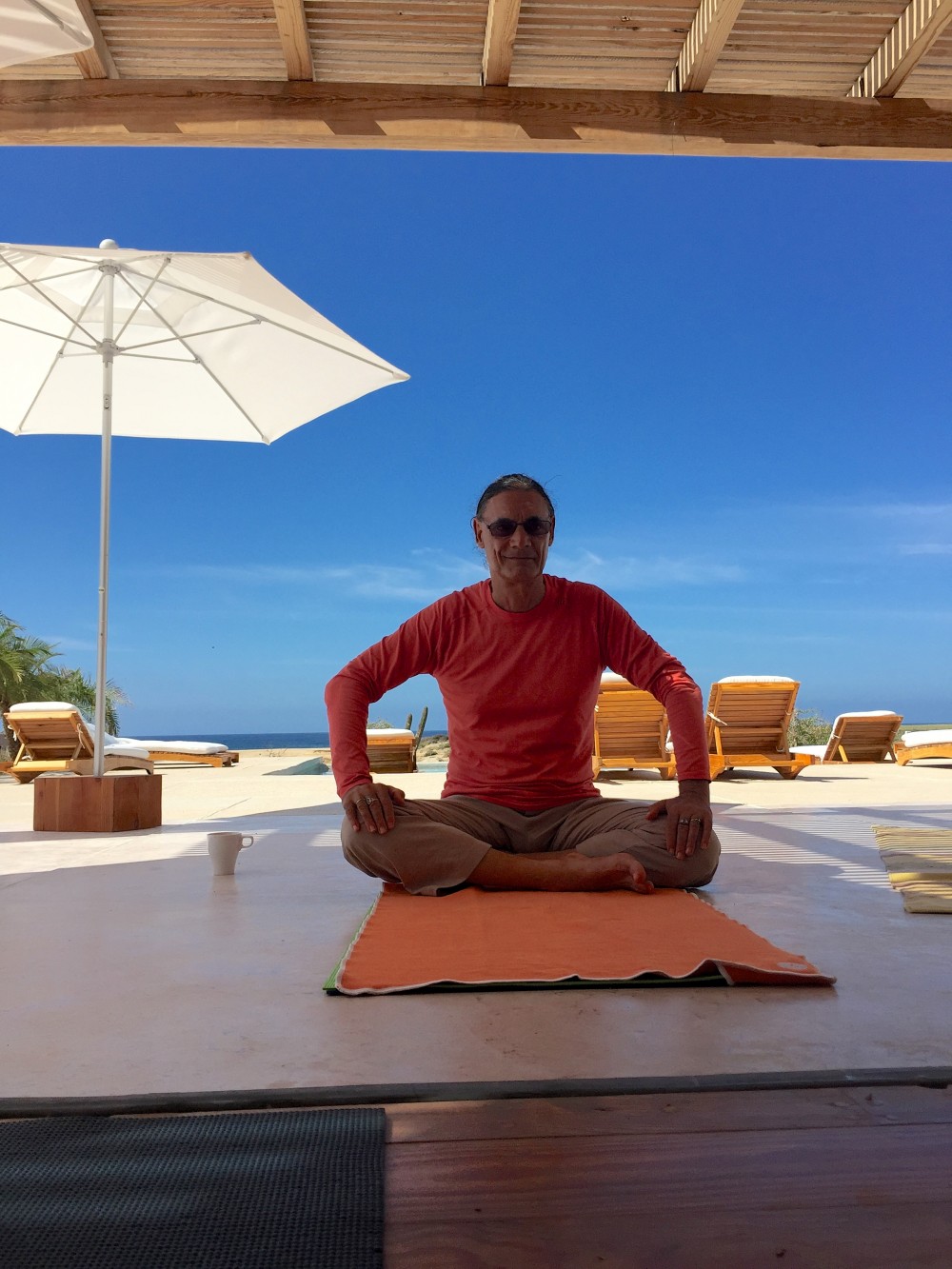 Later that morning, our last teaching with Fabio was under a 300 year-old tree – the same tree that Rinpoche first taught under many years before at Tsegyalgar West.

Much gratitude to the Baja Community at Tsegyalgar West for their hospitality and support of our training including Nanay, Lyobaa, Jimena, and Ana as well as Yantra Yoga assistants Nataly, Max, and Luke. And, of course, Fabio.