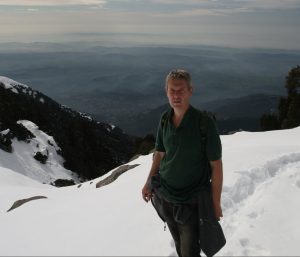 The 1980s in Poland was a very interesting time. On one side there was the old depressing Communist way of life that was gradually disappearing, and on the other young people started to feel this wind of change blowing from the West.

There was Solidarność – a peaceful social movement breaking down the political situation – and then a state of war with tanks on the streets. And in this really strange political environment, a group of us teenagers felt like we were living on some strange planet. Solidarność had a very Catholic background and we were looking for new horizons. We created some outsider space a little bit like flower power, with sex and drugs and rock and roll, or rather Punk Rock. So, that was my background during my teenage years. However, it started to degenerate very quickly when heroin came and a lot of people went down and just became junkies.

I spent six years inside this story between the ages of 15 and 21. Finally I discovered that most of my friends had HIV, and so I was quite sure that I also had it. Since I didn’t believe in God I realized that I had to find some spiritual path so that I could die in a good way – I didn’t believe in God but neither was I a nihilist or materialist. I was like a bee flying from flower to flower: practising hatha yoga in the morning, then trying Zen meditation, at midday it would be the Mormons or Jehovah’s Witnesses and in the evening there was the Hare Krishna group. But I still didn’t feel it was mine!

One day a friend came to my flat and, when he noticed that I was looking for a spiritual path, he took me to a Karma Kagyu center for the meditation of the XVI Karmapa. It was before this lineage split in two currents.

I sat down and started to listen to the leader of the group: “Now everything is becoming like a dream” – and everything became like a dream! Everything was going on just as he said. When it was the moment of meditation on the three lights of the Karmapa, I felt my hair starting to stand on end. When my friend and I left, I said: “Now you have to spend the rest of this day with me and tell me everything about it. It was stronger than any drug I ever took.” And he said: “You cannot do meditation instead of taking drugs!” I answered: “No, no! Drugs were in my life because I hadn’t met this meditation!” And it was perfectly true! 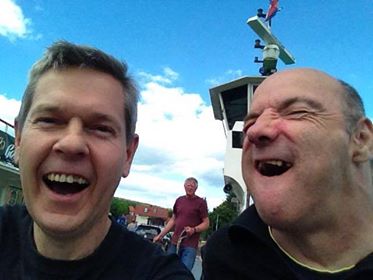 Now, in order to have more time for Dharma I found a part time job as a carer. Here I am with my patient. (I am on the left.)

He told me what I should do, so I started to do a “little ngöndro”, just doing 10,000 times Refuge, etc., even though I had had no formal transmission of these practices. Then Ole Nydahl came with the Phowa practice and many, many great lamas from the Kagyu lineage.

For three years I did ngöndro – 100,000 prostrations, Vajrasattva, Mandala Offerings and Guruyoga. There was a lot of pollution going out from my three doors which is why I couldn’t do it faster. All my six years on drugs was going out from me like black smoke. On my spiritual trip I tried to be so good that I even took the Genyen Vows of a lay practitioner… it was a mistake. I also did a blood test and it came out that I didn’t have HIV! It was strange!

I not only did ngöndro but also many other meditations, and when you do them so intensively, many tensions manifest and also old karma grows fast. One night my friends came with LSD and said: “We don’t see you anymore! You are sitting at home all day and only doing meditation! Take a break, man!” And I broke my Genyen Vows …

We had one of these incredible parties, but when I woke up next day I was still on LSD. And the next day too, and the next, and the next … And it wasn’t funny anymore! I realized it was connected to broken samaya. What could I do? I just continued doing ngöndro and tried to handle this Acid energy, which was really strong, somehow. It was like losing a field of protective energy around me. Total openness, but not in a good way… You know: “… it’s a wild world …”

When I finished the ngöndro, I went to Tenga Rinpoche to ask him if I could become his disciple in order to receive the next meditations – guruyoga, Yidam etc. While I was sitting in front of him waiting to ask, deep inside my heart I heard two words: “No! No!” It was so strange! Not in Polish, not in English, but in another language… Like Italian…? So, I just followed the voice of my heart and went home to continue ngöndro.

Then someone told me that Namkhai Norbu Rinpoche was coming to Poland. I already felt Him one month before his arrival. Some big, great energy was coming! He landed exactly on the day I finished the ngöndro. Then, when I went to His teachings, the LSD just stopped working for a moment. When He left Poland I knew I had to follow. I made some very fast money, selling sunglasses on the street, and I followed His whole trip through Russia up to Baikal Lake in Buryatia. At the end I came to Him and I said: “I want to be with You!” He said: “OK” and shook my hand.

I returned to Poland and then immediately went to Italy. I made some fast money in Venice, selling toys on the street, and went to Merigar. There was a retreat and then Rinpoche left for South America. After a few months living in the dormitory, and working for Merigar, my parents called me and said that I had some money because they had rented my flat so it was possible for me to go to Argentina to see Rinpoche! I went immediately and there something really strange happened.

In those times Rinpoche had to do everything with community people – eating together, swimming in the pool, riding horses to the waterfalls. It was a great time to be so close! During one trip to some local sacred place Rinpoche was resting on the rocks. It was beautiful weather, when suddenly a black cloud appeared in the blue sky and it started to rain. Everybody went to some nearby restaurant and only Rinpoche, Fabio Andrico, Bodhi Krause and me remained on the rock. We were drinking wine in the rain. After some time it started to thunder around us and I just knew that it was Rinpoche doing something strange with the weather. I’d already seen it with some other lamas, so I was not surprised. What surprised me was that we were the only people who remained with Rinpoche, drinking wine in the rain between the bouts of thunder!

In the evening there was a big party. I had brought a necklace of amber from Poland to sell, but I decided to give it to Rinpoche. We were dancing in a circle and he was playing with my necklace. I turned to Bodhi and said: “We have to open ourselves! That’s all!” And in that moment Rinpoche put the necklace on and looked straight into my eyes. It was impossible that he could have heard what I said, but I was sure He knew. In the same moment all the energy of the LSD that had been with me for so many months just stopped, like fire when you put water on it.

I returned to Merigar and started to party with Luca T. and my friends from the joy division of my teenage years. They just came there following Rinpoche and Luca’s house was a base. My parents gave me their old car and I went around Monte Amiata with a toothbrush in my pocket and met many incredible Dakinis, who probably wouldn’t want to be mentioned in this story. It was an extraordinary three years, and I could see how the community was 20 years after. In Poland it had just started and there were not so many old practitioners. 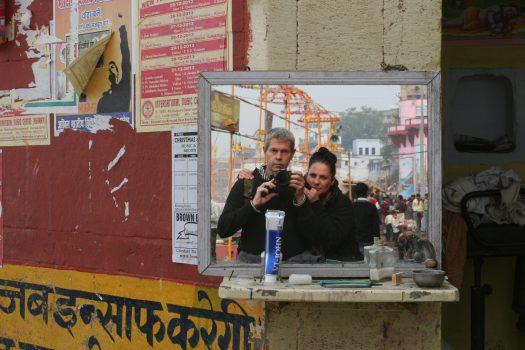 It was the time when Poland made restrictions about foreigners buying land and properties and also in Italy Polish people couldn’t buy anything. My parents wanted to give me some money but it was impossible to buy anything so I couldn’t be legal there. When I couldn’t see any future, I just came back to Poland. I participated in many of Rinpoche’s retreats. I also followed Him on pilgrimage to India and Nepal to the four main places connected to Buddha.

During this time Rinpoche seemed to be disappointed in me, never smiling, just looking wrathful. Of course there was a reason. I used to party a lot in this time. I didn’t touch drugs anymore, but there are still other means of enjoyment. My friends were still alive so we had a good time. Finally Rinpoche suggested that I follow SMS training.

And that’s how I met Rinpoche and the teachings.

I changed my life, met an incredible girl, married her, and made a career in advertising agencies as a specialist in desktop publishing. I followed SMS training till the 4th level and then became a Santi Maha Sangha Base instructor. Recently I became a member of the International Publication Committee of the Dzogchen Community for Polish publications.

And life is still not boring at all!