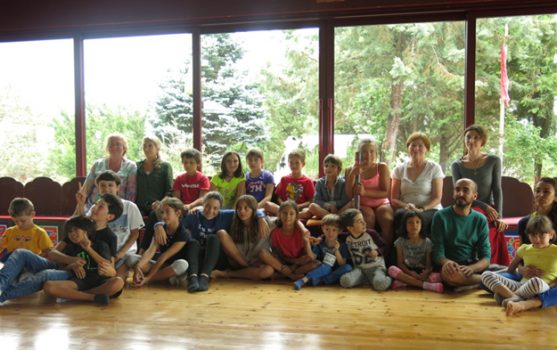 Group photo of children and instructors of the Yoga Holiday. Photo by Daniela Monaci

“Vacanza Yoga” week for the attending adults was a series of long, intense yantra yoga sessions and an afternoon course on meditation. There was also a chance to join the Khaita singing and dancing group that met every afternoon in the Gönpa

For the 20 children who participated each day, the elements were rich; it included Kumar-Kumari yoga for children, followed by art and theatre work on exploration of the senses and afternoons of music and rhythm. Add to this making friends, climbing trees, basking in the sun and eating wonderful food and you have a full week for children in Merigar’s beautiful surrounding of green countryside and fresh air.

Each day began with an hour lesson of kumar kumari yoga in the mandala hall. Twenty children from five to thirteen years of age, practiced together under the attentive instruction of Fabiana Esca and Constance Soehnlen. There were mornings in which the children were observant and tireless, but also times when lying down and resting on the yoga mat and chatting with a friend nearby became part of the lesson. Afterwards, a pause with fresh fruit, biscuits, juice and water was happily welcomed by the children and teachers! During free time, the younger children played and discussed seriously if Spiderman and superheroes could really die. The older boys and girls hung out and checked out the latest music and games on their cellphones and ipads. 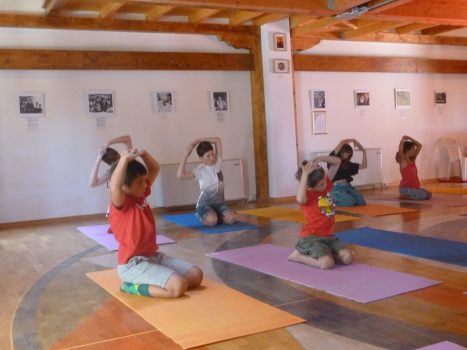 Before lunch, there was theatre work on exploring senses led by Fabiana while the younger children painted, drew and sculpted. After a delicious lunch with the parents, children and instructors all together, the children had a ‘rest period’ if you could call an hour and half of a self-initiated parkour ‘resting’! Jumps over and on benches and stones with somersaults kept the older children entertained and a bit aching the next day.

The final day’s presentation included a demonstration of kumar kumari yoga, followed by a great ‘concertina’ that reflected the music and rhythm workshop developed over the week by Nicol Bana and Niccolo’ Pozzi. Creating and using recycled instruments, the children accompanied Nicol’s guitar playing and singing.  Of course, a ‘bis’ followed the performance. A video was also created as part of the afternoon’s course, which was sent out to happy parents and children. All the art work created over the week, both group and individual pieces became an ‘art happening’ at the Gönpa entrance on the last day.

The week ended with lunch all together and a cake and prosecco. Many thanks to Fabio Tomassoni who acted as project manager, and also to the adult instructors, Laura Evangelisti, Tiziana Gottardi, Stoffelina Verdonk and Marco Bassegio.

See you next summer!