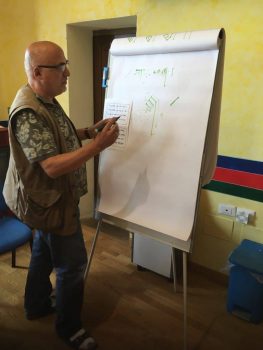 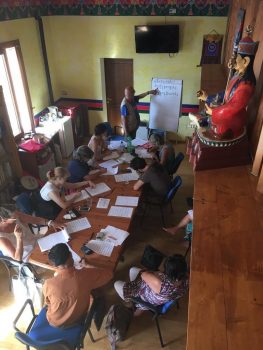 For some of us attending the Tibetan Calligraphy course with Giorgio Dallorto in Merigar West it was not the first contact with the alphabet, some of us even had some experience with the language, and for others it was the absolute first time. But in any case, for all of us the first contact had been challenging, so it was an adventure!

I would say the general process and result was very positive. The first course was two days long. We started with a general introduction of the Tibetan language and alphabet, the materials used and the proportional scheme used to draw the letters. We were learning üchen script (Tibetan: དབུ་ཅན་, Wylie: dbu can) of Tibetan so this was our focus. We went through each of the 30 letters of the Tibetan alphabet plus vowels, the proportions and the sequence of strokes used to write them. Then we immediately started to practice using it! We set out writing the Song of Vajra in the üchen, for which also we had to add the superscript and subscript and stacked letters, and some special letters used to transcribe Sanskrit letters and sounds. 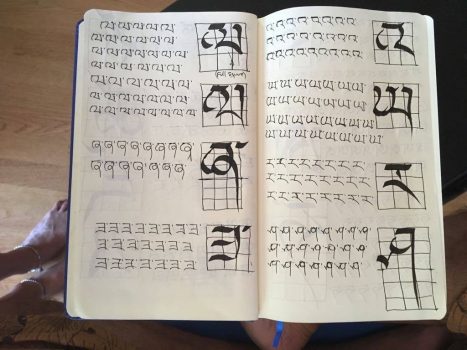 After this, and if it wasn’t enough, we continued our practical use of üchen, this time in order to write the famous Six Vajra Verses, also called Rigpa’i Khujug, or the Cuckoo of Instant Presence, the very first Atiyoga text translated into Tibetan by Vairochana, which synthesizes all the Ati teaching in just six lines. Quite a practice! We went line by line, seeing also some elements of grammar so as to get a glimpse of the meaning, and it went very well!

The next week we had only one day for class but in any case it was a very juicy day. In the morning we again did a calligraphic exploration of the üchen script, and in the afternoon we learned yet another Tibetan script, called u-med (Tibetan: དབུ་མེད་, Wylie: dbu-med), which is used much more extensively in Tibetan hand writing and calligraphy. So it was also another condensed and productive day. It was a great experience and I sincerely hope we get to enjoy more calligraphic tours with Giorgio as a guide! 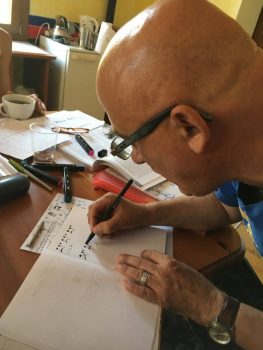