The International Dance Council CID founded in 1973 is the official organization for all forms of dance in all countries of the world, and an official partner of UNESCO, the United Nations Educational, Scientific and Cultural Organization. Their 51st World Congress of Dance Research held in Athens, Greece, July 4-8, 2018, invited experts in all forms of dance around the world to present lectures and demonstrations of dance during the event. The invitation was also extended to instructors of Vajra Dance and Khaita Joyful Dances from the International Dzogchen Community.

Links between the International Dzogchen Community and the International Dance Council go back to 2011 when Prof. Namkhai Norbu first met Prof. Raftis in Moscow at the Dzogchen Forum organized by Yeshi Silvano Namkhai. Shortly after that meeting, collaboration began with the entry of the Dance of the Vajra into the Global Dance Directory of the International Dance Council, and more recently Khaita Joyful Dances. Prof. Raftis travelled to Dzamling Gar, Tenerife, in March 2016, and together with Prof. Namkhai Norbu presented CID certificates to Vajra Dance instructors and Khaita qualified experts.

Most of all the participation of dancers from the Dzogchen Community in a public event like this has been very much inspired by Rinpoche and Rosa as an opening outside the Dzogchen Community. Today this is the direction in which our dancers are moving, providing a bridge that can link the Community to a larger public, particularly through Khaita Joyful Dances. 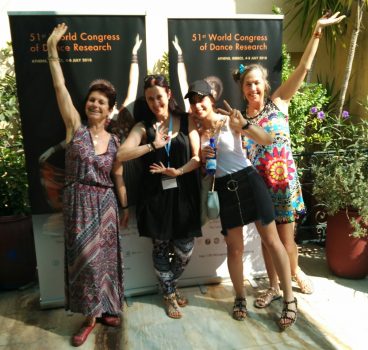 Four dance instructors from the International Dzogchen Community travelled to Athens to take part in this important event: Rosemary Friend from Australia to give a talk on the Vajra Dance, Salima Celeri and her daughter Giulia Yangcen Mimaciren came from Italy to present Khaita Joyful Dances, while Adriana Dal Borgo led a workshop on Khaita Dances.

The event was attended by 225 participants from 34 countries of the 5 continents, who presented traditional dances, modern dances and others that were more innovative. During the four day congress, there were 66 lectures, 49 classes, 66 performances, 4 video projections, and 4 exhibitions.Although there were great differences in costumes, language, and style, the common factor of dance was a cohesive element during the days of the gathering. In fact, one of the missions of the CID is to encourage different groups to meet, communicate, and spend time together. As our representatives reported, the conference was very open, joyful and welcoming. 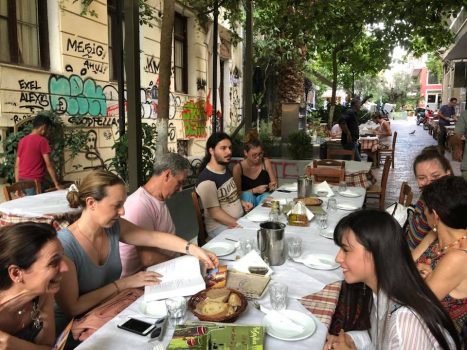 Dinner with the Greek Community and Elisha

The Greek Dzogchen Community also played an important supporting role to the event by welcoming and hosting the Community dancers with great kindness during their stay. Many thanks to the Community of Athens and also to Luna Lattarulowho helped to coordinate the trip.

On the same days as the Congress, instructor Elisha Koppensteiner led a course on the Vajra Dance That Benefits Beings with the Greek Community and on the last day, our CID dance instructors were able to participate together with the Greek Community and Elisha in a ganapuja at Garab Ling, the Athens ling, during which they performed the Dance of the Vajra. As a final sign of good auspiciousness for both events, a strong rain closed the session on the last day.