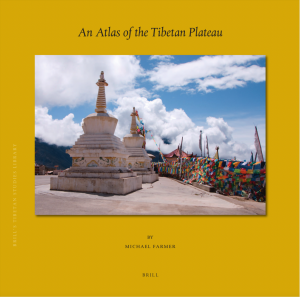 After the publication of A Historical Atlas of Tibet by Ryavec, I thought that the final word on the historical cartography of Tibet had definitely been written: I was wrong! The commitment to write another work dedicated to the current state of the Tibetan plateau with more research and database construction has been fulfilled by architect and cartographer Michael Farmer, who has been involved with Tibetan culture for many years. With this magnum opus, which took decades to complete, he has compiled an essential reference work warmly welcomed by scholars and students interested in learning about contemporary Tibet as well as spiritual practitioners who wish to follow the footsteps of the great masters of the past along the many places of pilgrimage that still exist in Tibet today.

Michael has always been fascinated by maps and areas in the Himalayas, northern India, and Asia in general, possibly due to the fact that many of his relatives were born in the shadow of the Himalayas. In his twenties he undertook a long trip through India and Nepal and became fascinated by these areas and the people who inhabit them.

His maps have appeared in many famous publications including Dudjom Rinpoche’s well-known The Nyingma School of Tibetan Buddhism (Wisdom, 1991) and the Tibet Handbook (Footprint, 1996). He has also recently created a unique computer-generated three dimensional Map of Tibet for the MACO (Museum of Asian Art and Culture in Arcidosso, Italy).

An Atlas of the Tibetan Plateau features 120 color maps and numerous satellite images depicting everything, from more recent settlements to what remains of older historical monuments and buildings, and bearing witness to the remarkable effort that Tibetans have brought to the reconstruction of their religious heritage. Using extensive satellite imagery the author has identified and positioned more than 2000 religious locations plus nearly 2000 settlements named both in Tibetan and Chinese where possible.

This beautiful contemporary atlas of Tibet contains an introduction describing in detail all the technical characteristics used by the author for mapping the entire plateau starting from the extreme western territories up to the north-eastern territories bordering Gansu, Sichuan, and Yunnan. The geographical information system (QGIS) has enabled the author to add an enormous amount of different types of data through digitalization and computation. Every location has been positioned using satellite imagery. Google Earth and other sources have been used to provide the illustrations as well as locational geo-refreshing.

Regarding the language used for the place names, the author has put great effort into making Tibetan toponyms and their Chinese equivalent accessible to non-Tibetan speakers. He uses a simple romanized transcription for the  pronunciation of the Tibetan place names, together with the pinyin names, on the maps.

After a brief description of urban growth and development in the most recent years, the book describes all the aspects of this transformation with exceptional photos of rural housing and religious development. Finally there is a description of the development of the railway system, including the Lhasa-Chengdu rail link through the Tsanpo Valley to Nang County and the rail project from Zhigatse to Kathmandu.

In several maps the reader can also discover the great number of airports that have been built in the Plateau; at the moment there are some 20 new high altitude airports, the highest being Daocheng Yading airport at 4,411m. in Dabpa County (see map 51).

The book’s written section, which is of the greatest interest to Tibetologists and those generally interested in the culture and history of Tibet, describes the Gonpa Classification and Development. It starts with a glossary that explains the etymology and meaning of the Tibetan words (i.e. gonpa, “solitary place” – a monastery of any size), and then goes on to list the monasteries, identified by symbols and colors representing their lineages when they are known (see also maps 111-114).

Gonpas have also been symbolized in charts according to their size, from large teaching monasteries to small monastic communities. The many gonpas are shown here in different time lapse photos that reveal their growth in recent years. The populations of these very large gonpas has grown at an extraordinary rate, for example, Larung Gar’s population has reached as many as 40,000 inhabitants.

The introduction contains 51 aerial photos in different scales, mainly referenced by the date and reference number of the corresponding map. Not only Gonpas but also Chortens and Mani Khorlos are shown and where possible in different years.

The core of the book is composed of the proper atlas containing 108 maps in many different scales. To this auspicious number of maps, the author has added:

After the maps in the central part of the book, the second part contains the Indices:

This publication is the fruit of a lifetime of study and research. I would like to thank Michael for his commitment to this work for which the publishing house has produced a volume that is elegant, modern, and, above all, useful for all those who will be travelling to the sacred land of Tibet in the present and in the future. An important and essential reference work for scholars, travellers and pilgrims.