Preparing oneself and practicing with a new, original and unprecedented formula.

Twenty-seven lessons of fifty minutes each on Tuesdays starting at 6 pm, from 7 April 2020 until the end of the year, online. A course on the Base of the Santi Maha Sangha structured in an extremely innovative way, arising from a simple question that Paolo Roberti di Sarsina, blue Gakyil of the Dzogchen Community of Bologna, asked Alfredo Colitto, SMS teacher, “Alfredo, do you feel like teaching a course on the complete Base of the Santi Maha Sangha via Zoom?”. Alfredo generously accepted and had a free hand on course planning. The result, in such a difficult and strange year for the whole world, was amazing: 99 participants, a number that has never been reached for a cycle of lessons held in Italian via online.

Alfredo explained, “I took the Precious Vase in hand and organized by dividing the topics according to the subject and the time … I started with the first chapter of the book, which is short, and did some tests to see if it worked … During the sessions I spoke spontaneously but based on a framework that I had prepared each time”.

Although an hour passes quickly, there is always the risk of being distracted and for this Alfredo tried to include a practice phase in order to develop experience. Each week there was also “homework” and practices to do, obviously optional, which allowed the most diligent to maintain continuity. The result was exciting for all the participants who connected from different places in Italy and even from abroad and repeatedly expressed a deep and sincere appreciation. 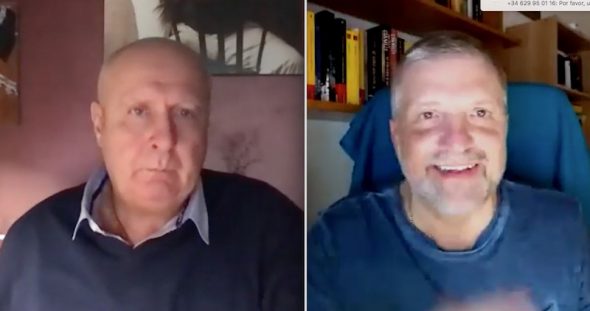 Certainly it would not have been possible to organize such an activity without the constant presence of an incredibly attentive, precise and punctual coordinator such as Paolo Roberti di Sarsina, who provided a lot of visual and textual material that was so precious for practitioners, giving us from time to time some real treasures. Furthermore, at the end of each lesson, Paolo, who was always there to welcome latecomers or solve connection problems, sent each of us the recording of the session so that we could prepare our own archives to consult whenever we wished in the days to come.

It is difficult to summarize the experiences of each of us in an article. For such an innovative course, Paolo also decided to propose an innovative article, encouraging us to collaborate in the drafting. As editorial coordinator I chose to let those who wished to express their experience directly in a few lines focus on the topic that was most meaningful for them. Here are some contributions that I hope you will enjoy reading.

Homage to our precious Master!

Refuge and Bodhicitta by Luca Villa

Refuge and Bodhicitta were the topics addressed in the eighth to the twelfth meetings of the course. Alfredo followed the text of the Precious Vase for both subjects, which were illustrated with careful attention to the teachings of the Master, distinguishing between external, internal and secret Refuge, as well as between Bodhicitta of intention and action. He often clarified the most difficult points of the text with some very effective examples. During the seventh lesson Alfredo had already emphasized the importance of Bodhicitta for Dzogchen practitioners – “As practitioners on the Path we must always act with compassion and never with selfishness” – especially because we are unable to remain in the state of rigpa all the time and for this it is good to examine our intention each time we take Refuge during the practice. The five lessons focused on the purposes and methods of the different Buddhadharma traditions in relation to Refuge and Bodhicitta. In this way Alfredo introduced the Six Paramitas and the Semdzin, to develop the union of calm and movement.

The first six of the Seven Lojong by Sonia Cilingot

The seven mind trainings or Lojong included in the base level of Santi Maha Sangha as preliminary practices are taken from the textual cycle of the Chetsun Nyingthig and belong to the Dzogchen Upadesha tradition.

The mind trainings allow us to integrate the essential points of Dzogchen and guide us towards the experiential discovery that dualistic life has no meaning. This awareness gives us the motivation to go beyond the experience of samsara during our lives and is the premise for transforming every moment of our existence into an experience of practice. The course gave me the impetus to practice the Lojong and led me to a greater awareness of the mental mechanisms in which I was trapped and, as a consequence, to be more present.

Understanding and energy by Donatella Negri

I believe I can say on behalf of all of us taking part in this course how precious and special it was. The way and the generosity with which so much material was made available for study, thanks to Paolo, were truly incredible. We were able to understand more deeply and clearly that there is no hierarchy or separation between the different vehicles that the Buddha taught, which are equally as valuable as the path of Dzogchen, the essence of all. And on the online platform that we used, thanks to Alfredo, a beautiful energy was created, beyond space and limits, that has been a precious support in this period of world crisis.

The Four Awareness and the Seven Mind Trainings by Chiara Carraro

After a concise and detailed introduction, over the course of several lessons Alfredo led individual short meditation sessions on the Four Awarenesses and the Seven Mind Trainings relating to the third of the six preliminary points to enter the teaching: “Calming body, voice, and mind and re-educating oneself” (chap. 2). The many useful examples he used, that could be easily linked to our lives, helped us create a path of profound reflection that brought to life the words of the teachings contained in the text and made more concrete and less intellectual the understanding that “… practicing the Dharma is the only thing that has the power to free us from all the problems of Samsara ”(quoting his words).

Alfredo Colitto’s course was very in-depth and detailed and I appreciated the fact that he offered us the opportunity to practice whenever a section of the text required it. Thanks to the practice on prajnathat comes from meditation I was able to better realize the absence of an independent entity.

With this course Alfredo and Paolo were able to look to the “future”, promoting an innovative model of meetings and training. During an emergency situation, such as the one experienced during the lockdown, online meetings quickly turned into real weekly appointments. Although it was in a virtual space, the reflection of every face helped me to feel a strong sense of a community sailing on the same boat. We set out on the path of knowledge of the SMS through the kindness of Alfredo who introduced us very clearly to the theoretical part and, at the same time, made us experience what was explained at each meeting. He always encouraged us to continue our individual practice between lessons and precisely this allowed us to delve into the deep knowledge of the Dzogchen teachings based on our personal experience. My gratitude goes to our compassionate Master for the precious teachings of the SMS, and, of course, to Alfredo and to Paolo who, like a true conductor of an orchestra, coordinated the entire organizational apparatus.

The practice of separating body, voice and mind by David Busin

The most significant lesson for me was on the Longsal Nyingthig, specifically the practice of developing the capacity of the intuitive mind when it manifests. This was my practice session: following the instructions given during the lesson, I took the position of the Yantra Yoga dagger to form a human Dorje to practice the “separation of the body”. After thirty seconds, however, I realized that I could not hold the position for the duration of a meal so I dropped down sounding the syllable HA and then resumed the position after a few seconds. I repeated these very short sessions several times and on the seventh repetition I felt a particular sensation, as if something was coming out of my fontanel.

Although I am aware that I applied this practice in a somewhat “personalized” way, the feeling I had was predicted in the practice, even though I had forgotten the stages of the practice itself.

The method by Alba Papini

A special aspect of this long SMS course on the Precious Vase with Alfredo Colitto, organized by the Community of Bologna, was the method. One hour a week of explanations and moments of practice, every week for months. And what months! Bit by bit applying patience and perseverance and using the rest of the week to practice.

All generously, adequately and promptly presented by the Alfredo Colitto-Paolo Roberti di Sarsina duo, with all useful support, videos, books, articles and invitations to other instructors to facilitate study, alone and in a group. SMS means precisely this, the Dzogchen Community. In the language of Oddiyana it is the same as the Tibetan Dzogpa Chenpo,which not only designates the Fruit, but also the Path.