The title of this article is taken from a tango of the 1940’s. And it suits exactly to what we feel at Tashigar, mainly the few of us that have traveled from other places of the country up to here, filling out applications to be able to change province and with the fear always present of catching the threatening and omnipresent Covid during the trip.

That is why, due to this present pandemic and the protocols required to the organizations, our dear Gar looks lonely and thoughtful, guarded by the silent hills in the horizon and the dark storm clouds that presage rain like threatening travellers. Till the sky roars and the rain pours in the middle of the night, or in the morning or sometime in the afternoon and, suddenly, it rumbles in the roofs as it the sky would have gone mad. Good to stay in our little bed, bad to be caught in the middle of a walk. 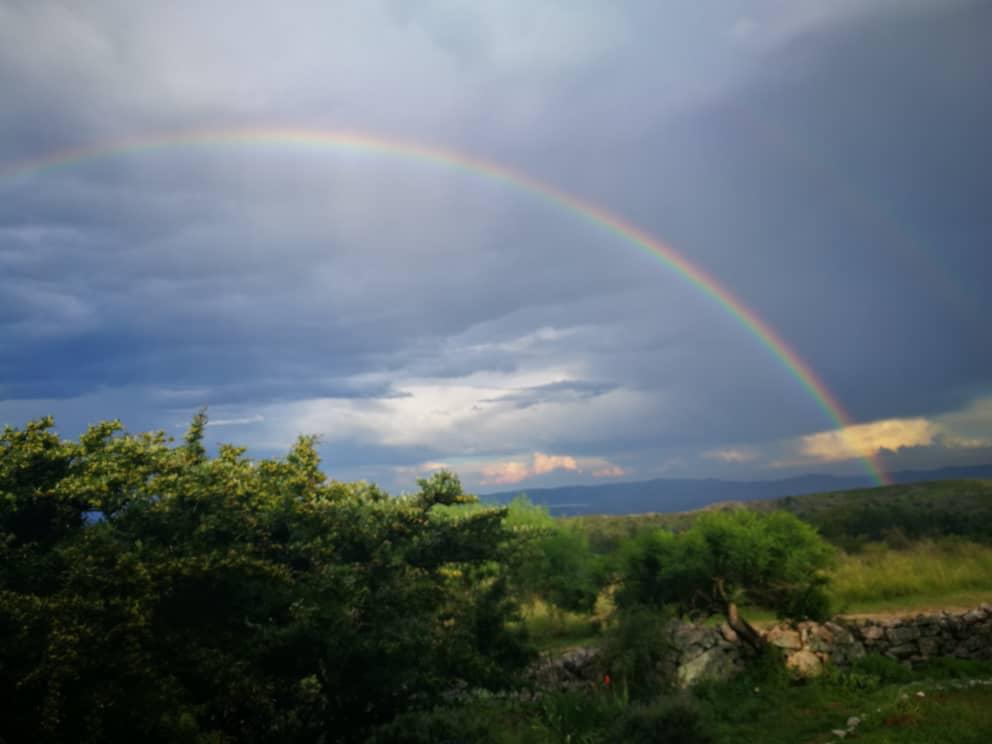 So, those of us who come from the confinement of the big cities and of the omnipresent chinstrap, suffer. We wished the open air so much, the pure and energizing air of Córdoba that also in the 1940’s took over, by itself, to cure the tuberculous patients. Because the climate of this place is semi-dry, it is not supposed to rain and rain during two months in a row behind the crystals.

At this point it is evident that the complaining and weeping tone of the tango has invaded these lines. And there is something more, an early morning we woke up with a thunderous noise. A clap of thunder, I thought, and how strong it was that the bed trembled, everything trembled! Later we learned that it was rightly so, an earthquake, a seism and that the noise had come from the depths of the Earth, not the sky. “Crazy weather!,” my mum would say.

Of course there is also the other side of the rain: the greenery and seclusion. The gradation of greens is so intense, so abundant the pulse of the trees, the thickening of the little pine forests, the variety and hight of herbs, the profusion of fruits: blackberries, apples, tangerines, oranges, pears, walnuts, that make us feels a blend of admiration and wonder. Just the diversity of little wild flowers that peep everywhere after each rain, so delicate, so perfect, with nothing to take away or add, they are an entrance to the space of contemplation. 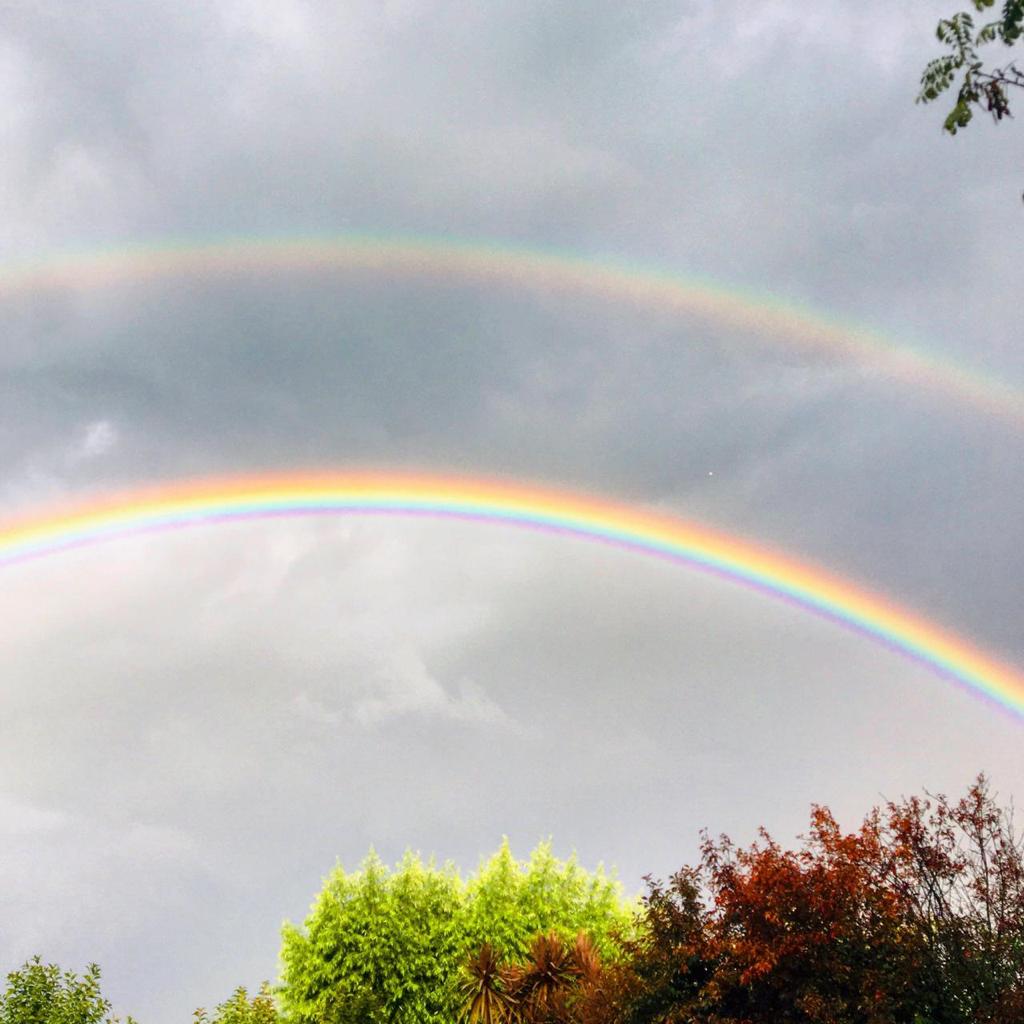 And even more when we pass by the places where Rinpoche was so many times. Before full of faces and voices eager to listen to His voice, now solitary, so deserted that His absence is felt even more. And it seems incredible that once we had Him sitting by our side, showing us, orienting us, laughing and being always the perfect example of the Presence. At these moments, one feels that, under the same whispering eucalyptus, one can ask from the depth of silence: Master, how do we go on with this sacred place? What do we have to do?

Since the beginning of January, and due to the gakyil as well as practitioner’s initiative, there are zoom meeting being held to pave the way for the advent of a new gakyil in April. Also, to foster the communication among everyone, the overcoming of conflicts and differences that accumulate with the passing of time and the discussion of problems that are always present in an organization. From these meeting a group of collaborators was formed to help with the transition, share information about the handling of the Gar and to lighten the work of the gakyil members. Due to the time of the year, the first task that came out was to organize Losar in the middle of the several pandemic restrictions.

With this aim, to start with we came up with the initiative that has benefited us so much throughout 2020: The practices organized from the Gar by the blue Gakyil and shared via zoom. We have already said that rains invites to seclusion, both for practical reason as well as for the mood it promotes. So it was ideal to participate in the preparatory schedule for Losar from the intimacy of our homes in Tashigar Mandala. 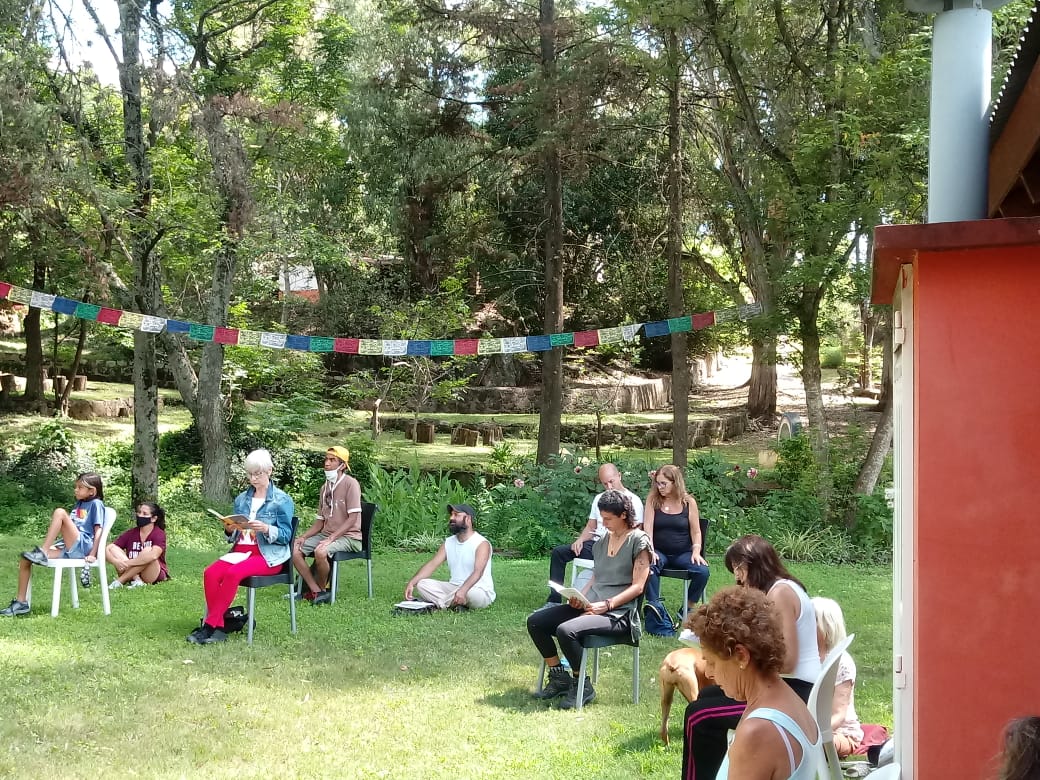 This program included: a Dorje Trolod retreat held by Rinpoche at Tashigar in 2012 to free us from obstacles and negativities and protect us in these difficult times; a week of practice of Purification of the 6 Lokas directed by practitioners of different countries of the South of our globe and the detailed and entertaining suggestions of Adriana Dal Borgo to prepare the Guthuk soup.

The problem was that this media, the zoom, was not the ideal one for something so concrete as the preparation and hanging of Lungtas in this place. Fortunately there was a bag full of Lungtas in the Gar, but they had to be sorted out, form the different sets and sew them. 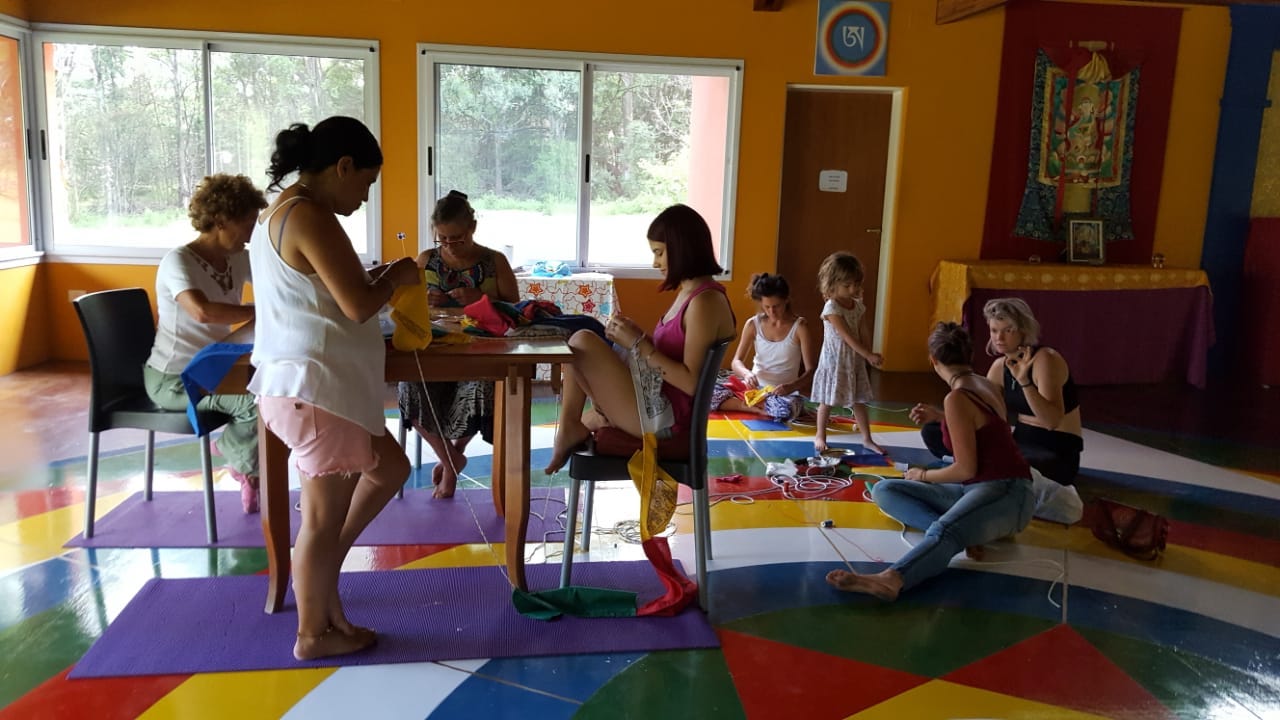 Up to then, the Gönpa was only enabled to dance on the mandalas, on this occasion the geköd let us use it, following the right protocols, to get together to sew the Lungtas. It was a special occasion, not only because the karma yoga has a joyous and purifying effect in those who practice it, but also because we took advantage and celebrated Tashigar South’s 31st anniversary. We sang the happy birthday song, we shared a fruit cake made by a practitioner and each one of the people present expressed a wish for the Gar aloud. 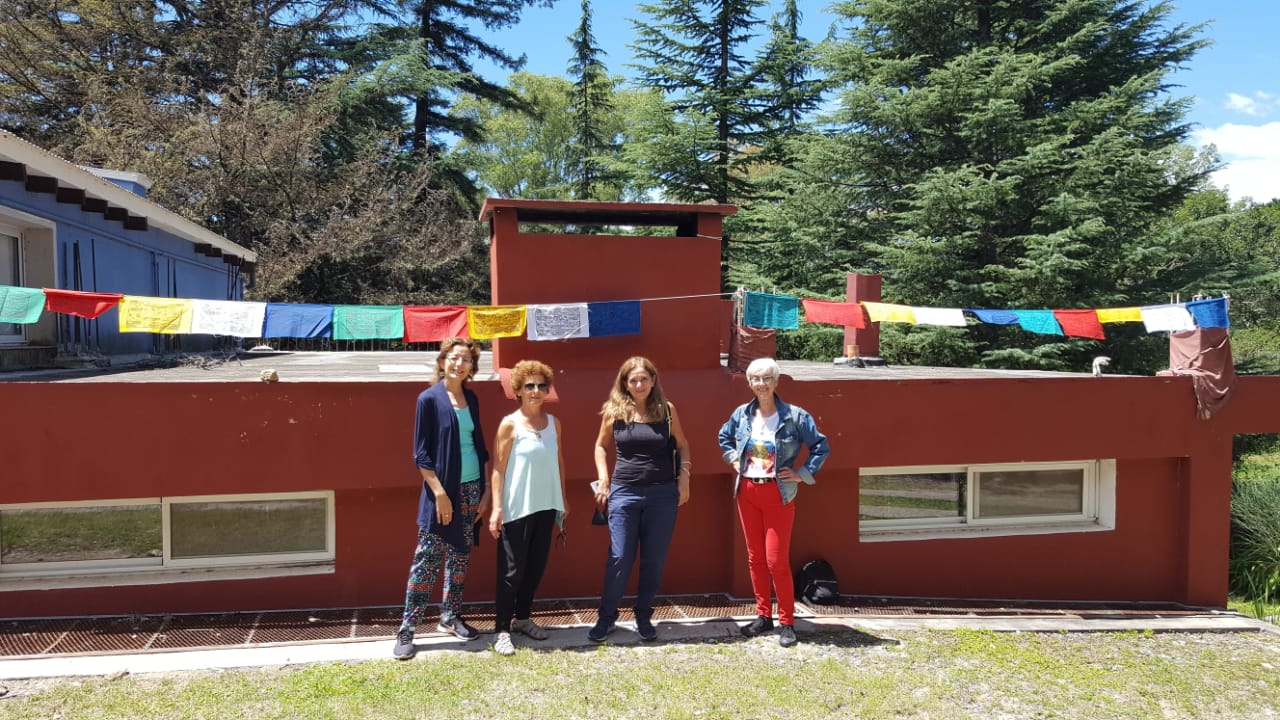 We were eight, the number of the eightfold path, the infinite number, so we felt that all the Sangha was participating in that celebration. We have to add, that the wishes expressed aloud were only seven. Alila, the youngest seamstress (four years old) said she wanted her wish to be invisible. We keep on asking ourselves what the future will yield when it is fulfilled. 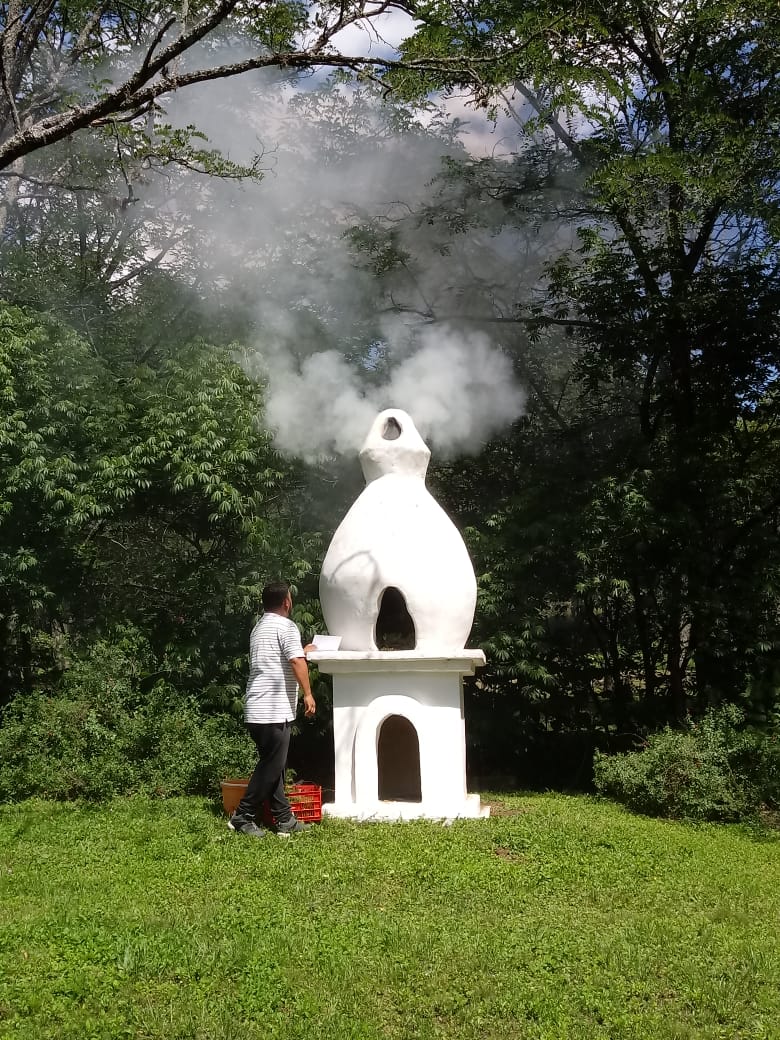 The good experience of this meeting, inspired the idea of gathering again outside the Gönpa for the Fire Puja the last day of the metal rat year, but again the threatening black clouds left us at home and we had to feel satisfied with the zoom. Just the weather accompanied us on February 14th for the Sang, that we celebrated under the trees and it was also transmitted. Then we hung the Lungtas.

Now we are in the last week of the Mandarava Retreat, short version, with Chudlen and Sothig, that started the day after Losar with the explanations of our Yantra Yoga instructor, Marisa Alonso, and was guided by practitioners from Costa Rica, Mexico, Perú, and Chile. When it is over, there will be the world Practice of the Guru Yoga of the White A, led by Steven Landsberg, the explanation of the Ganapuja of Mandarava by Nina Robinson and the Dance of the 12 A’s, getting together for a global practice guided here by Nélida Saporiti.

At this time that I finish these news it is sunny and just some graceful little white clouds running through the sky, but the extended weather forecast says that we will go on with rains. I guess that, now that there are water stock bones, maybe it is not such a bad idea for the future maintenance of the Gar in which Alila will grow up.