Recently I was asked to meet separately, for one hour each, three eighth grade classes of an international school in Rome, in order to work on breathing as a means for managing stress and emotions. These meetings were part of a larger program aimed at giving boys and girls tools to understand their anxieties, worries, emotions and fears, and manage them without being overwhelmed. I had done something similar in the previous two years, close to the exam that these thirteen-year-olds have to take in order to go to high school, to prepare themselves for a step that (many of us remember) generates a certain anxiety … an exam is always an exam! 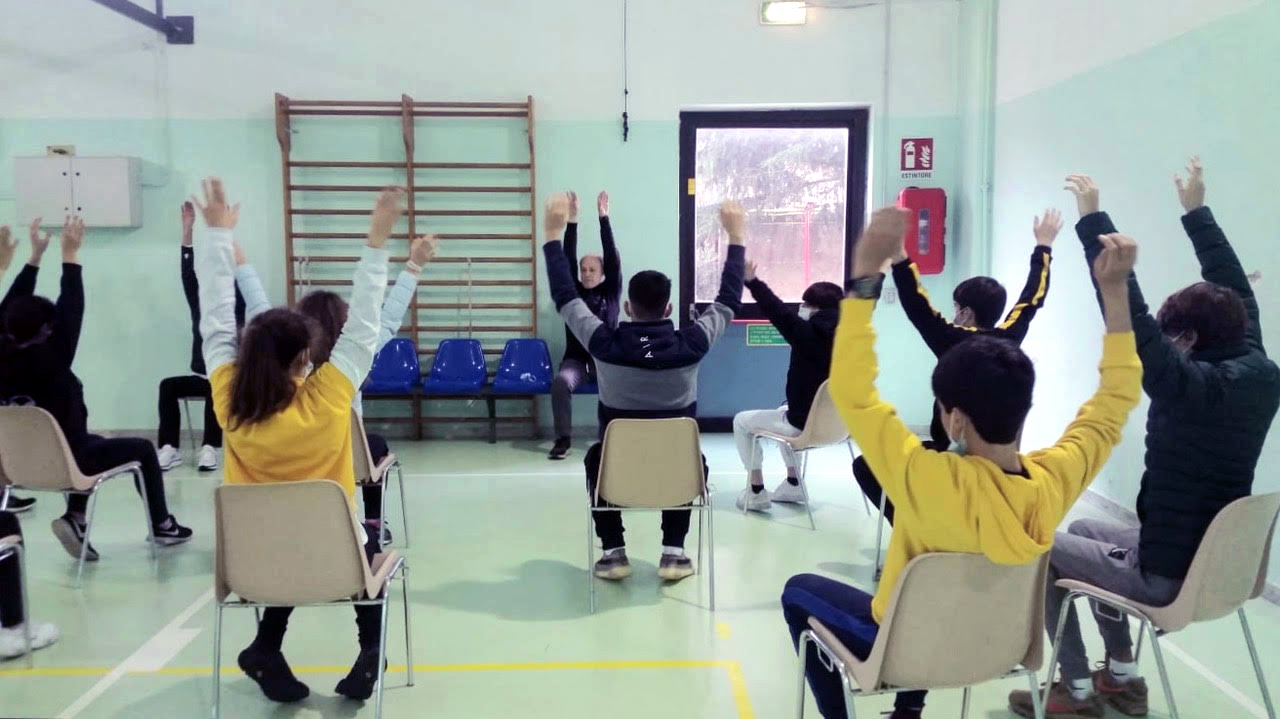 It goes without saying that this year was a little different from previous years, given the situation that the pandemic has created in general, and which has been very much felt in schools. We had use of a very large and well-ventilated gym, so with the necessary distancing, we could work even without masks. Some of the young people preferred not to take their masks off. I didn’t know if it was out of an acquired habit, from fear, or just following the rules. The question remains open.

We sat on chairs, rather than on the ground as in previous times, to ensure greater respect for distancing, and this proved to be very useful, because having to stay in their assigned places meant that they distracted each other much less and therefore followed the work in a better way.

I used the techniques that I know: some of those that are used in “Breathe”, the nine purification breathings, the rhythmic breathing of Yantra Yoga, and some simple exercises of attention to the breath.

An hour is a very short time, all the more reason to get in touch with these teenagers I was seeing for the first time. During the lesson, different phases of attention were observed, and various reactions to the proposed exercises; these could be used to recall simple concepts related to their concrete experience, and it was even possible to exchange some questions and answers.

The classes, even though they belong to the same age group, can be very different, according to the individuals within the classes. During the year a “group” forms with particular internal relationships. Then the time in which the meeting takes place is important: the energy is very different in the early morning, rather than close to lunchtime. What they did before the meeting and what they already plan to do afterwards is another factor. The type of day in general and the mood that goes with it also carries its own weight. These factors can change the setting of the lesson in order to adapt it to the specific situation.

In general, I observed that some students are very attentive, especially girls, who are also the most receptive and open to new things. Some students are deliberately and stubbornly inattentive and decide not to get involved and keep to that until the end, while others slowly begin to take an interest and follow.

The element that stands out most of all is that, except in some cases, young people in general really lack awareness of their posture; they do not have any idea of the importance of being “aligned” and “with a straight back”. Even when it comes to breathing they are generally surprised that there can be so much to talk about, and that there are so many implications, physical, mental, and emotional, related to the way we breathe. When these things are introduced, they start to think a little about them and this is perhaps the most positive thing about these short meetings.

I have no way to know whether or not there remains even a small trace, a seed, of what we have done. At least they seem to politely appreciate these short exchanges. My hope is that at least they have received the idea that there can be an opening to a different dimension.

It is important that a greater awareness of the aspects related to one’s physical body, breathing, and mind is introduced from an early age, in the phase in which one is growing and developing, when the foundations can be laid for harmony between these aspects. For this reason, the work of our teachers of Yantra Yoga and Kumar Kumari in the schools is precious, and will, I hope, be more and more extensive and fruitful in the future.

Sergio is a teacher authorized by Chögyal Namkhai Norbu for the Second Level of Yantra Yoga and holds the Diploma of “Breathe” instructor having followed the Teacher Training conducted by Fabio Andrico.