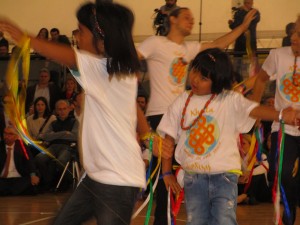 April 29th was UNESCO’s International Dance Day and what better way and day to present Khaita, at Ambrit International School’s Dance Festival in Rome. With over 400 children participating and 300 parents watching, Ambrit school children, from 6 years to 13 years, presented a series of dances from the world over.

Add to this Khaita as the special featured dance. I have worked as a teacher at Ambrit school for over 25 years and have participated in and seen over 25 dance festivals, scheduled each Spring on the school calendar. The show would always end with a special dancer or troupe from one of the five continents. How surprising and wonderful to receive the news that four, possibly five Khaita dances would be part of the festival and moreso, that two Khaita dances would open the show. A third dance was placed at about mid program and 2 others closed the event. 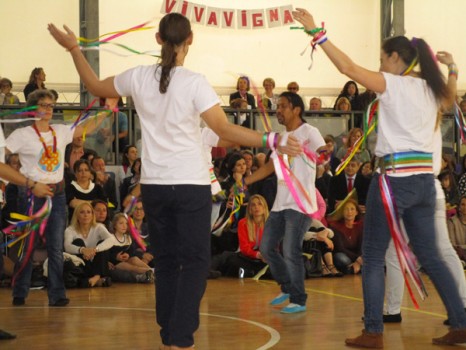 Topgyal Lama introduced Khaita, talking about how the dances originated, thanks to Professor Chogyal Namkhai Norbu’s interest in Tibetan songs and dance. Topgyal’s words were well chosen and heartfelt. The dances too were well chosen, with the show opening with Tsed la Dro, the children’s dance. In fact, very young children, Dekyid, Khandro, Giovanni and Angelo joined the BIG children, Yanchen, Topgyal, Christiane, Salima, Andrea Bucaioni, Gemma and Davia in this dance full of skips and hops, with a dash of rap. Tsering Dolker chose to film this first dance. The second dance, Ma-chen Gang-ri, was again received with a warm, enthusiastic applause.  The Khaita dance troupe was a mixture of dance teachers and dancers from Merigar West and from Zhenphenling, who then joined the Ambrit children seated on the gym floor to view a Hawaiian hula, a Maori stick dance, a French folk dance and body percussion movements. Then it was time again for Khaita, dancing beautifully Payul, a circle dance that could be seen well by all the audience. The last two dances featured were Tendrel and a requested ‘bis’, Bumo Madog. As these dances were being presented, I noticed many children and some adults ‘dancing along’ while seated, imitating so many of the hand movements. 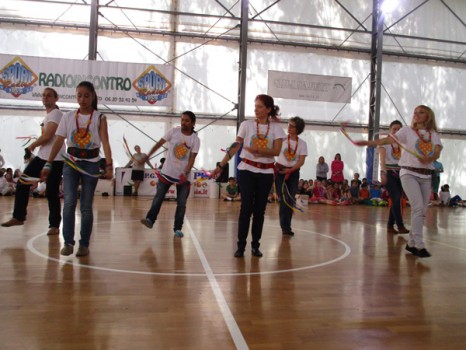 The previous afternoon, these Khaita performers with children and additional dancers from Zhenphenling practiced many hours together both for the school festival and a rich Khaita show presented that evening at Zhenphenling. All the donations raised that evening were given to ASIA for the recent emergency in Nepal.

Many thanks to all who danced, to Tsering Dolker, Topgyal Lama, Christiane Rhein and Andrea Bucaioni who collaborated in choosing the dances, preparing costumes and in coordinating the practice sessions. And our sincere thank you to Choegyal Namkhai Norbu whose love and dedication to these songs and dances have led so many of us to practising and enjoying Khaita together.