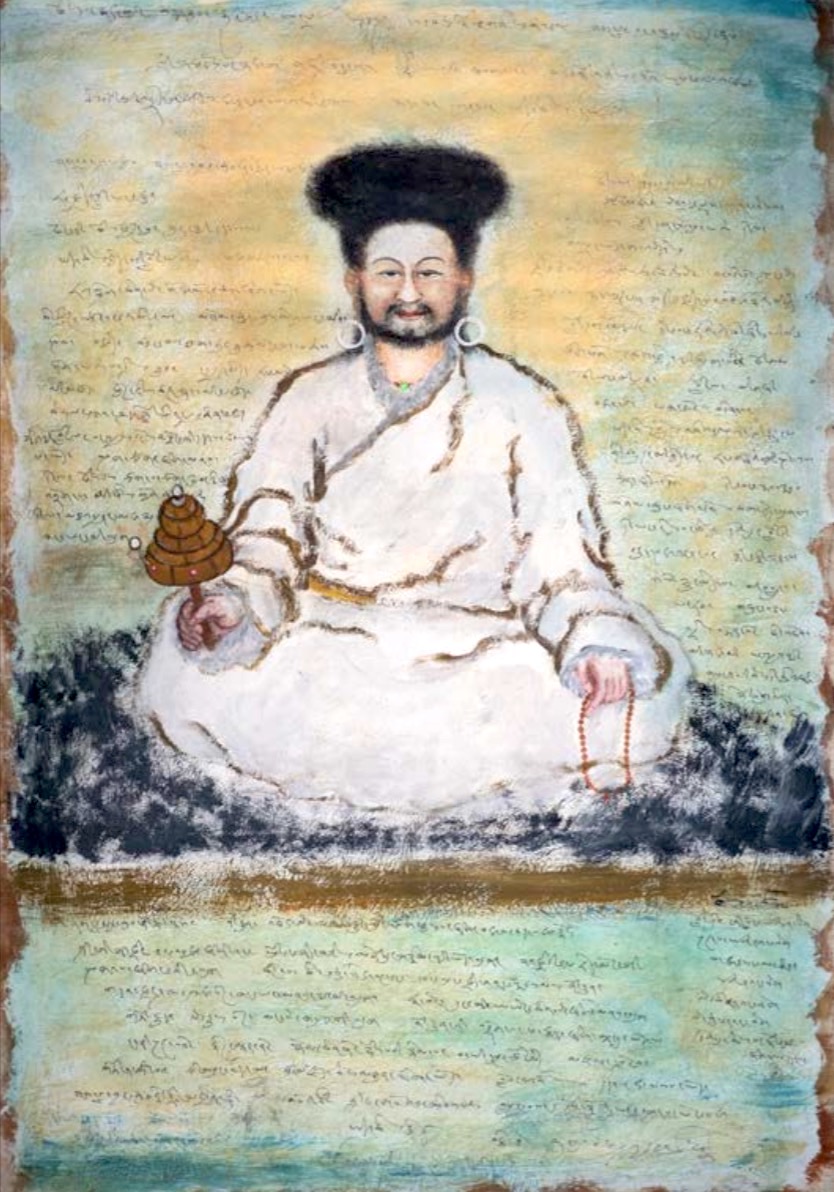 On December 8th, 2017 at Dzamling Gar, Chögyal Namkhai Norbu’s student, Mark Farrington, presented him with a portrait of his root guru, Changchub Dorje. Mark had commissioned a portrait from the Mahamudra master Drugu Choegyal, a highly gifted and well-known artist, who is the creator of the Primordial Masters panel in the Temple of the Great Contemplation at Merigar. In answer to Mark’s question as to the subject our Master might most appreciate to see portrayed, Drugu Choegyal responded very quickly, “a portrait of his Master.” Thus joyfully agreed upon by Mark, Drugu Choegyal created this powerful image of Changchub Dorje which was given by Mark to Rinpoche to honor his eightieth birthday in the Tibetan calendar and as part of the festivities celebrating his forty years of teaching Dzogchen.

In preparation for painting the portrait, Drugu Choegyal met with two elderly togdens who had been students of Changchub Dorje and who recounted his extraordinary qualities and the miraculous happenings in the life of that Master. Some of this story, composed in umed script by the artist, appears as the background of the painting and has been translated by Dzogchen Community translators, first from Tibetan into Italian by Giorgio Dallorto with an occasional suggestion from Elio Guarisco and from Italian into English by Nancy Simmons and Nicholas Simmons. We are so happy to publish this painting and the tale it tells.

The portrayal of Changchub Dorje presented in the words below is based on the oral testimony of two yogins of Khampa Gar, the trusted Togden Amtin and Togden A Chös who, having met the Master and received his Dharma teachings, had a samaya connection with him. We believe with confidence in what they have said.

People called him Nyagla, the Lama from Nyagrong. He was also known as Nyagla Changchub Dorje or Ratri Lama, the Lama Whom Goats Follow. He was a lama in whom trust and faith was placed by everyone in all parts of Kham. Although he possessed high qualities of attainment, he gave himself no airs nor behaved timidly. He was majestic and steadfast and immediately upon seeing him, one knew he was not an ordinary man. Neither proud nor self-important, he was not biased and had no attachments or aversions. He practiced continuously according to the principle of placing the Dharma above all else. Possessing great faith in his Guru, he perceived his Lama with immense devotion as a true Buddha.

Those who encountered him beheld a Master with a mass of densely matted hair who wore the lambskin outerwear of the lay Khampa with the wool inside and the hide outward. The typical garment of Khampa nomads was made of common cloth without red-dyed borders called tsakbub. Since Khampas are familiar with Buddhist teachings and practitioners, these people recognize clearly who is a genuine lama and how he or she should be. They give no importance to high thrones, impressive scholarship, eloquent speech, clever minds and quick brains or to the acclaimed and splendid.

Nowadays people believe a genuine lama must have the title Rinpoche. Khampas never think in this way. A lama in whom one can feel trust should have a stable character, be good-natured, truthful, and play no tricks, be without a trace of self-importance, and yet have full confidence in himself. Today people sometimes expect a teacher as a Dharma practitioner ought to be self-effacing, but it is not certain that is good. In any case, a Vajrayana teacher has to have the lineage transmission, be compassionate, neither deceptive nor hypocritical, of long-standing loyalty, and be deeply knowledgeable. Benevolent and never holding resentments, he behaves justly and practices the Teachings of the Buddha perfectly. He has not even the slightest pride.

The Khampas place their faith in lamas who are flawless practitioners whether a monk, a married yogin, a great scholar, a householder either a mother or a father, or if an elder or a youth. Anything such a lama, who is pleasing to see and a good listener, says is true and whatever he or she does is in accord with the Dharma. The main point is that person be a genuine Dharma practitioner without the slightest trace of conceit, not even as tiny as a cow bristle, unlike those who vaunt themselves, thinking “I am a yogin, I am realized, I am a supreme meditator.”

Lama Nyarong Changchub Dorje usually held a prayer wheel with three bands that he spun ceaselessly. He slept with his spouse on a bearskin that covered a wooden bed. On the tenth and twenty-fifth days of the lunar month and days when he gave empowerments or teachings, he would wear a white yogin shawl bordered in colored stripes or a pure white one and had large round earrings made of conch shell. He was good at recounting stories and the happenings of his life and his everyday existence was as the father of a family in their nomad home. Many anecdotes are told about him; he was like an old nomad without the least trace of pride.

When people met him, happiness became pervasive: all he said and did was appropriate and in harmony with the Teachings. The strength of the faith his disciples had in him was astounding. They fervently invoked, “Nyagla Changchub Dorje, please turn your mind to me” at the moment of death, at times of danger for protection, and for guidance in choosing the right path, certain their heartfelt supplications would be perfectly granted.