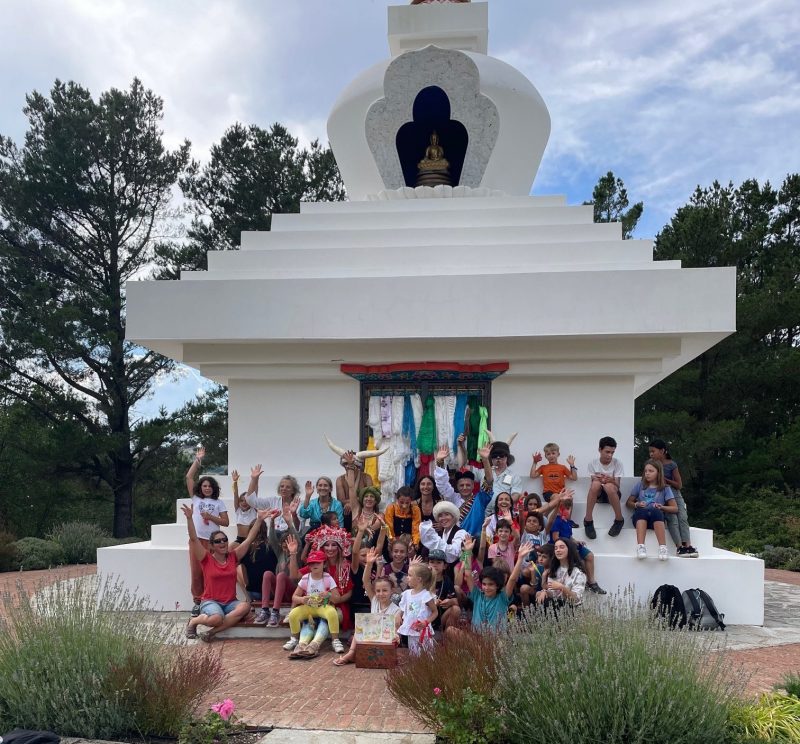 On Sunday August 21, at Merigar West, the entire day was dedicated to children, from 5 to 12 years of age. This was the second year that a Children’s Day was offered in the beautiful surroundings of the Tuscan Gar, a day in which children of different ages and backgrounds, from the Community and the local area, could enjoy a day of fantastic activities at the Gar.

This year the event was organized by a group of instructors of Kumar Kumari Yantra yoga for children. Kumar Kumari is a method of Yantra Yoga designed specifically for children between 5 and 12 years of age, conceived by Chögyal Namkhai Norbu, taking into account their physical size, energy, and unique qualities of breathing. Last year during a teachers’ training course for Kumar Kumari, a small group of instructors was formed with many ideas that included writing a children’s story in which the characters use the ten particular sounds related to the breathing that are used in Kumar Kumar Yantra. In that way by following the story the children can relate those sounds to particular characters. 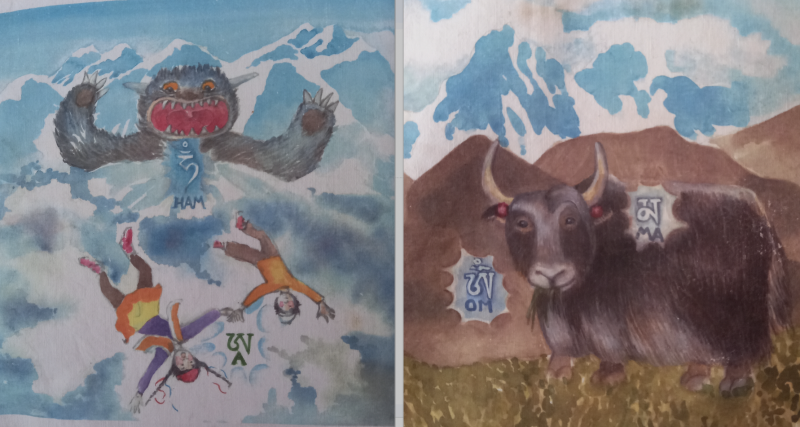 Throughout the year the group worked together to create the story line for the book while the illustrations were prepared by another member of the group, Cristina Conticelli, an illustrator of children’s books and a storyteller. The book is almost in its final form and will be published by OM Edizioni who collaborate with Shang Shung Publications and who are very enthusiastic about it.

Preparations for this year’s Children’s Day began in the springtime with several meetings and ideas based on the story that had been put together over the winter. Part of the preparation was to create a large curtain of material that would show all the illustrations from the book printed in color on material. 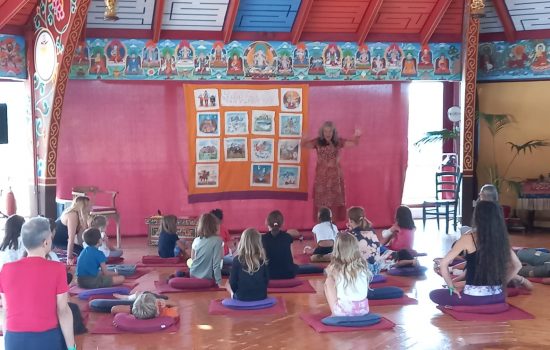 The Children’s Day was a beautiful day, clear, warm and sunny, with around 30 children participating in the older group from 5 to 12 years old, and about 10 younger children. While the younger children took part in different activities at the Yellow House with Constance Soehlen, the older group spent the morning at the Gönpa with Cristina who narrated the story using the panel to illustrate it. The main characters, Nyima and Dawa, a Tibetan boy and girl, are looking for their little yak who is lost and meet a number of mythical creatures during their travels, each of whom makes one of the sounds from Kumar Kumar Yantra. They finally manage to find their way home and so at the end of the storytelling, the children and Kumar Kumari instructors all linked hands and circled around singing the melody of the the six syllables a’ a ha aha sa ma. 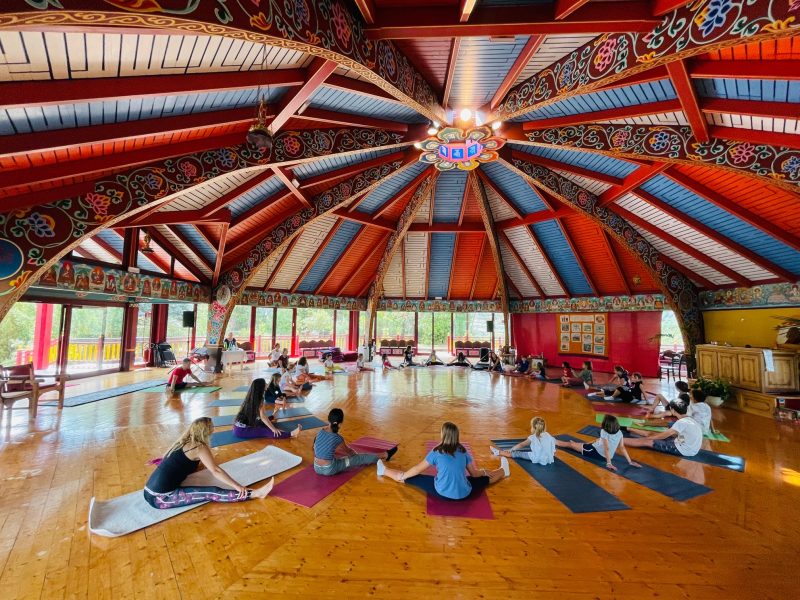 After the story the older children practiced the warmup movements for Kumar Kumari Yantra guided by their instructors, and then some of the exercises such as the 9 breathings,  the only Tsadul that there is on the Kumar Kumari practice, and the 3 yantra, the snake, the bow, and the plough. Then at the end they all lay down in circle relaxing under the wonderfully colorful roof of the Gönpa.

After the lunchtime picnic break in the meadow by the Gönpa, there were a few games, and finally  the exciting Treasure Hunt! This had been organized in great detail with six places in the area around Merigar, the Gönpa, the Sangkhang, and the Stupa, and at each place one of the characters from the story could be found, in disguise, complete with costumes and makeup! The little yak, the yeti, the dragon, the snake, the garuda, the two Tibetan children, Nyima and Dawa, and the fairy. The children were divided into six teams, each with different instructions on how to find their characters. When they found each character they had to overcome some obstacles in order to receive different coloured ribbons. Once they obtained their ribbons they could receive fragments of their maps for the treasure hunt and gradually gathering all the pieces of the map, they could finally start on the hunt for the Treasure. The characters in costumes were so convincing that some of the smaller children actually thought they were real! 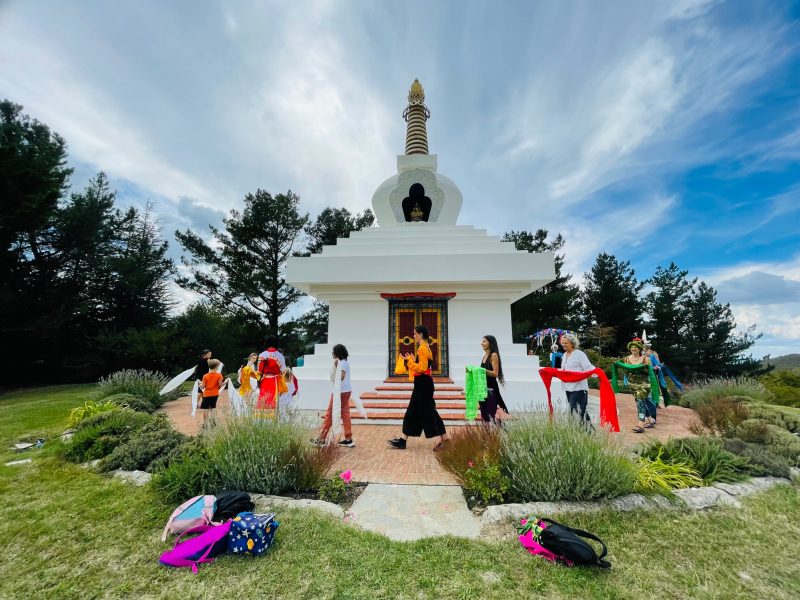 The children were accompanied in the Hunt by a flautist playing some Tibetan songs and when they arrived at the big Stupa they were met by the Fairy who gave a khatag (prayer scarf) to each child, and after passing around the Stupa a few times, the khatags were attached to the door of the stupa.

Finally the children discovered the hiding place of the Treasure, a large box containing many small bags with semi-precious stones, bracelets and necklaces that had been donated. A real Treasure trove! The children then walked up to the small Stupa for a few Khaita dances with the Fairy and finished at the Yellow House with an abundance of ice-cream, fruit, and biscuits.

There was the most wonderful weather for the day with a special light and some really impressive clouds while the rain held off until the evening.

Many of the children participating were from the Dzogchen Community but there were also some who had done Kumar Kumari at the local schools, while others had seen the announcement about the event and had just come for the day. It was a very joyful way to introduce many people to Merigar. 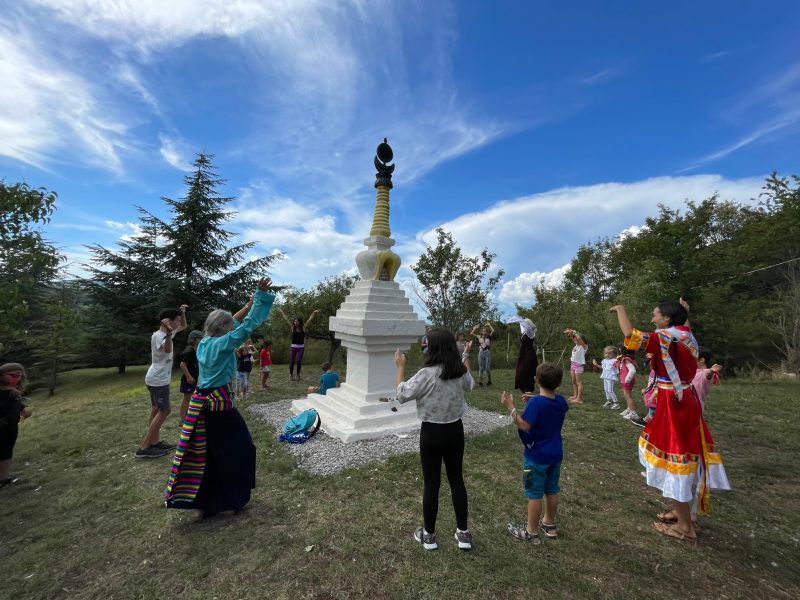 The organizers were very happy with how the day went as many different people collaborated to make the event a success and hope that this type of activity can be repeated at Merigar in the future and in other places. They are looking forward to continue their collaboration with some of the local schools to continue to bring Kumar Kumari Yantra sessions into the classroom and possibly even establish regular sessions of KKY at Merigar open to all children.

Laura Evangelisti would also like to take the opportunity to say that many more  Kumar Kumari instructors are needed and invite especially younger people in the Dzogchen Community to attend the Kumar Kumari teachers training that take place iat Dzamling Gar and Merigar.