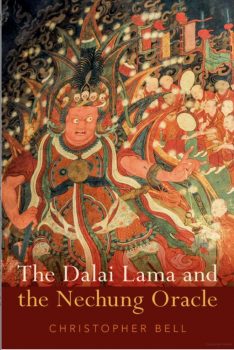 Though quite at home in the modern, scientific, geopolitical world, the 14th Dalai Lama has never made any secret of the fact that one of his most trusted advisors is a wrathful spirit of the gyalpo class, who communicates to him via a medium, a monk known as the Nechung oracle. Famously, in his autobiography, His Holiness describes how he sought the counsel of the oracle on whether to escape from Tibet in the spring of 1959. “To my astonishment,” he writes, “he shouted, ‘Go! Go! Tonight!’ The medium, still in a trance, then… wrote down, quite clearly and explicitly, the route that I should take out of [Lhasa], down to the last Tibetan town on the Indian border.”

In his landmark study of this strange relationship, Christopher Bell demonstrates that the oracle is not only a vital support to the Dalai Lama’s life, but an integral part of Tibetan statecraft. In India, the Nechung monastery lies close at hand to the Dalai Lama’s residence, just down the hill next to the offices of the Tibetan government-in-exile. The red rays emanating from the sun on the Tibetan flag, introduced by the 13th Dalai Lama, are a reference to the oracle. As Bell shows, the 2nd Dalai Lama first developed contact with the oracle in the early 16th century, before its role was formalized as part of the lamaist government that united Tibet under the Great 5th in 1642.

In conversation with the 3rd Dalai Lama, the oracle is reported as saying: “I eat the flesh and drink the blood of the enemies and Obstructing Spirits.” The present Dalai Lama describes their respective responsibilities thus: “My task, that of leadership, is peaceful. His, in his capacity as protector and defender, is wrathful.” The Tibetan nation has other important protector deities, such as the female Penden Lhamo. But, Bell suggests, the Nechung deity – a spirit called Pehar, latterly more commonly identified as Dorje Drakden – achieved its pre-eminence, at least in part, by the way it connects the institution of the Dalai Lama with several important strands of Tibetan political and religious history.

Most notably, Pehar was one of the spirits subdued by Guru Padmasambhava in the 8th century and so is part of Tibet’s foundation myth: Pehar is an abbreviation of Pehar Kordzoling, the treasury of Tibet’s first monastery Samye, the protector deity’s earliest Tibetan home. Pehar also has the esteemed pedigree of coming originally from India, the country of the Buddha. Pehar’s initial resting place in Central Asia, before being brought to Tibet, was in Mongolia, the land of the Dalai Lamas’ main patrons the Mongolian khans. Finally, Pehar previously had strong bonds with the Kagyu hierarchy: the oracle’s absorption into the ritual life of the Dalai Lamas’ government is evidence of the Gelukpa victory in Tibet’s 17th century civil war.

Bell looks at Nyingma sources describing the birth and activity of Pehar: he was born, it is said, from one of thirteen eggs of the union of a male mara and female naga spirit. He examines a compendium of texts, the Nechung Record of the 5th Dalai Lama, which includes accounts of the spirit’s arrival at Nechung monastery: as a bird who alights on what subsequently becomes a sacred birch tree. He surveys the rituals and liturgical calendar associated with Pehar. He investigates the history and architecture of the Nechung monastery, including a thorough survey of its wall paintings. And he delineates the way in which Nechung becomes the hub of a network of shrines and rituals in other surrounding monasteries.

A lot of this, it must be said, is very detailed and dense: heavy going for the non-specialist reader. The final chapter, though, on the oracle itself – the monks who served as the successive mediums – is more accessible. We learn, for instance, that it was the oracle, in opposition to prevailing political opinion, that urged the 3rd Dalai Lama to travel to Mongolia to create those vital links with the khans. Identifying a new medium (sku rten) is not always easy, nor has the oracle been infallible. Notoriously, the medium at the time of the 13th Dalai Lama predicted success against the British invasion of Tibet in 1904. Thousands of Tibetans were massacred, their primitive weaponry and Buddhist amulets being no match for the British machine guns.

Bell leavens his pages with observations from his fieldwork in India and Tibet. The present Nechung oracle describes the disturbing feelings he experiences in the build up to possession. Reciting Hayagriva mantras, his sense awareness dissolves, until he has no recollection of anything that takes place once the deity takes over. Bell witnesses the oracle in action: shaking and hissing, moving and dancing as if on coiled springs of energy, speaking cryptically in a weird, high-pitched voice. In the immediate vicinity, a handful of Tibetan laymen and women enter spontaneous trance states: shouting, flailing around and eventually fainting.

This is an accomplished, if sometimes rather laborious work of scholarship, that takes us deep into the complexities of an arcane aspect of Tibetan Buddhism, which yet retains a significant role in Tibetan national identity. There are some dissenting voices. In 2016 during a meeting of the parliament-in-exile, a Tibetan politician openly criticized the government’s reliance on the oracle, only to be met with a storm of pro-Nechung protest from Tibetan communities all over the world. For the time being at least, the influence of Pehar lives on.