Poet and Vajra-sister Louise Landes-Levi made an important and influential contribution to the understanding of the spiritual roots of art and the spreading of this knowledge.

RASA: Or Knowledge of the Self, by René Daumal 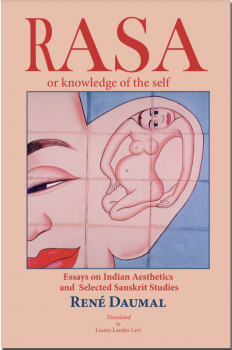 René Daumal (1908 –1944) was a French  poet, writer  and critic with a deep interest in the spiritual traditions of the East. In the seventies his unfinished novel Mount Analogue, published posthumously (1952), became a cult book in the New York art and poetry scene. The novel is playing in an imaginative and somewhat surrealist way with the analogy between mountain climbing and the spiritual journey to truth. Patty Smith called it her favourite book.

The book RASA is of a different nature. Daumal translated into French and commented a selection of Sanskrit texts, presenting the spiritual poetics and aesthetic philosophy that lies at the base of all Indian Arts, – a brilliant analysis of the differences between Western and Eastern views on art practice and theory. The book includes summaries and reviews of some crucial Tibetan texts, among others The Tibetan Book of the Dead, The Life of Marpa and The Conversion of the Birds. Louise, as a poet, writer and musician, with expertise in classical Indian music, has the perfect qualification for this task. It is of great merit to make this book accessible again.

In another context Louise, shunning no effort to give the English-speaking world access to his work, writes about this author: “Daumal sought a pervasive awareness that would affect each of his activities. (…) His life’s work and his daily life became a single thread through which he would develop a state of presence – a non-dual awareness – that was the inner subject of his other only apparently fictional works (…) “, making a deep connection between authentic artistic and contemplative practice obvious.

I want to add a more general note on the merit of translating.

Translation, in my opinion, is one of the most compassionate forms of art, especially when it concerns texts of eminent spiritual value like the written works of our Teachers, but also of other works of crucial cultural importance. To quote our Teacher: “Culture is Evolution”. I call translation an art because it is an impossible – yet feasible task. Impossible because of the fundamental incongruence between languages, as each one is expressing unique features, nuances and implicit cultural references that do not exist in other languages. Feasible, because with ingenuity, creativity and courage, devoted individuals nevertheless dedicate their time to this challenging task, that delivers neither fame nor big income – if any. A world without translations would be inconceivably impoverished, a world of unrelated islands. None of the greatest texts of Dharma Teachings and literature would have reached us. Let us be aware of how much we owe not only to Teachers and great writers but also, in a different way, to their translators.