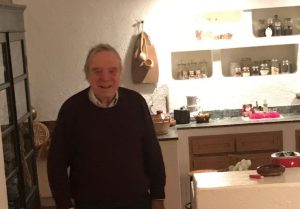 Our Vajra brother Giorgio Fiori passed away suddenly during the night of March 7-8, 2021. Giorgio and his wife, Anna, had hosted one of the first retreats of Chögyal Namkhai Norbu at their home in Gavirate, near Varese, in the north of Italy, in 1979. In 1999 Giorgio was appointed as co-director of the Shang Shung Institute by Chögyal Namkhai Norbu.