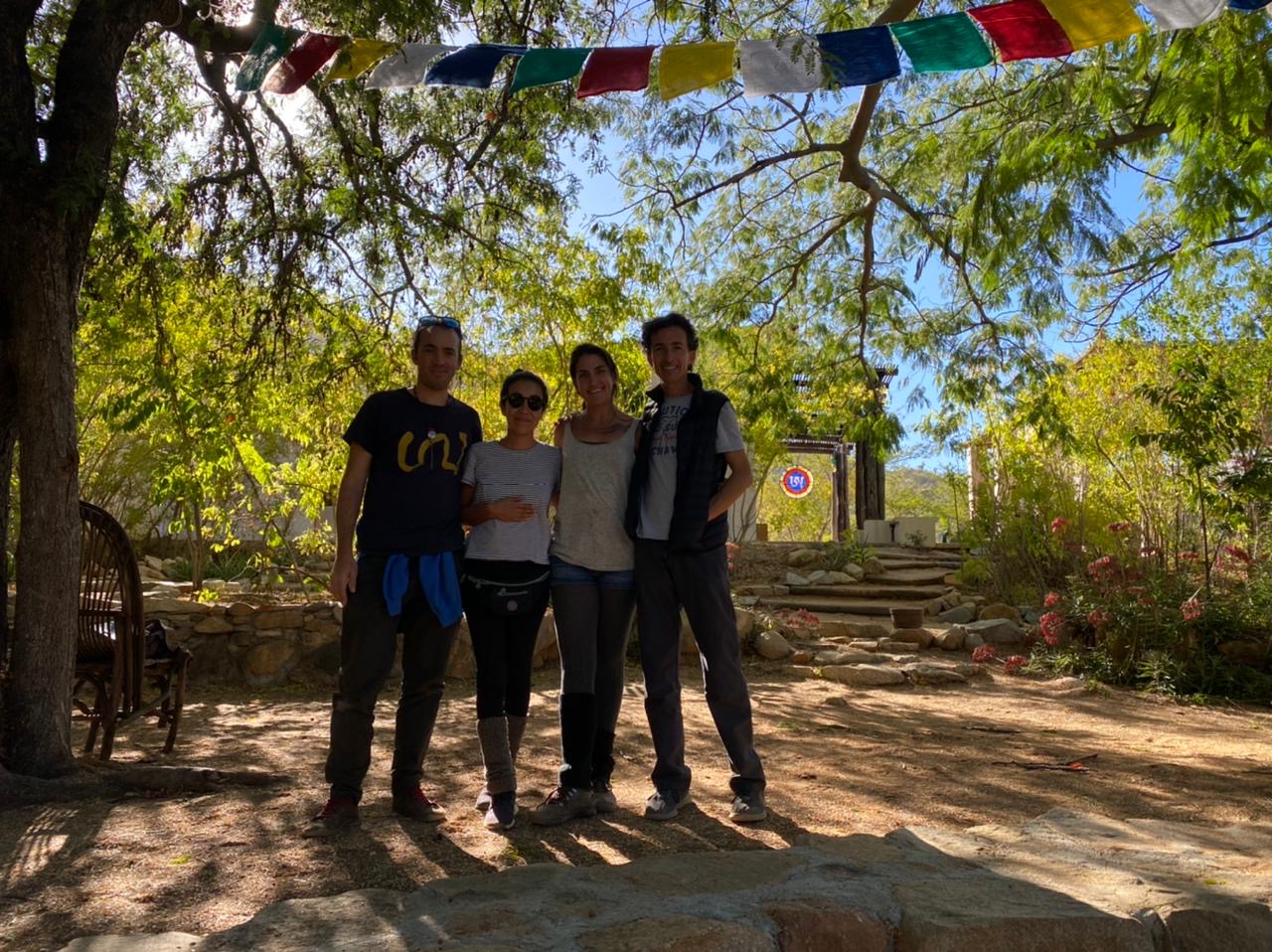 Tsegyalgar West is located about 500 meters above sea level in the southern extension of the Sierra La Laguna in Baja California Sur and while it feels quite remote when you are here (maybe due to the 14 km of dirt road that can get rough to impassable during hurricane season), it is actually only about a 45 minute drive away from Los Cabos International Airport in San José del Cabo and not much further from Cabo San Lucas where the Gulf of California meets the Pacific Ocean. Of course it’s also possible to drive here directly from the U.S., but don‘t underestimate the size of the peninsula, as the border in Tijuana/San Diego is more than 1600 km away.

Since the land was donated to Rinpoche and the Community in the early 2000s the Gar has evolved quite a bit. While in the beginning there was only the possibility to camp, there are now also 15 casitas equipped with bathrooms and solar heated showers which can be rented by single or shared by two practitioners each for personal or group retreats, a big communal kitchen, the Gönpa and covered outdoor area for the vajra dance mandala. (One of the future projects being a permanent Earth Mandala as anything plastic does not last long due to the strong sun and other elements.) Since the beginning the Gar has had its own natural spring that makes it an actual oasis in the desert with many fruit trees (Mango! Papaya!), which in the very hot summer give so many fruits that for the few people that stay here during that season it’s absolutely impossible to eat them all. Now there also exists a steadily growing vegetable garden, a working solar power system (lots of sun) and satellite internet (no cell service) and as one of the newest developments, the Gar is also very close to becoming a certified nature reserve.

The first steps in that direction were taken in 2020 due to the initiative of the former Gakyil headed by Monica and Giorgio who entrusted Lazuli, a professional biologist, with the project of doing all the necessary research in order to get certified by the Mexican government as a voluntary nature reserve. Although she limited her research of Flora and Fauna only to the part of the land that comprises the very heart of the Gar, in the course of the last year Lazuli (who in 2021 also became the new Gekö) was able to identify 274 different species (141 Flora, 133 Fauna) of which quite a few are endemic, various threatened and some even in danger of extinction, the Gar consequently being a literal refuge for countless sentient beings.

While the true extension of the Gar is quite difficult to grasp, just to illustrate its unfathomable vastness and incredible diversity and for those of you who like to play with numbers, you can try to get your head around the fact that the entire researched area comprises less than 1% of the total area of Tsegyalgar West (1240 hectares) and does not even yet include many of the huge variety of birds, from hummingbirds to vultures (both of which you can see every day respectively buzzing around flowers and circling in the sky). Without a doubt, every day here there exists the possibility of discovering something new by just observing nature all around you.

Although in a place like this it is easy to feel that there is no need to change anything, it does not mean that here there is nothing to do; quite the contrary. Apart from short or long-term personal retreats that are definitely possible (Outer Rushen and Longde being among the practices for which the land is considered particularly suitable by our Teachers.), our hope is of course that the global situation will allow us soon to again also offer longer collective retreats here on the land.

Meanwhile to give you an idea of the many possibilities in which you can collaborate with us, here are some of our current projects:

Wishing you all Happiness!

We are looking forward to welcome you here!