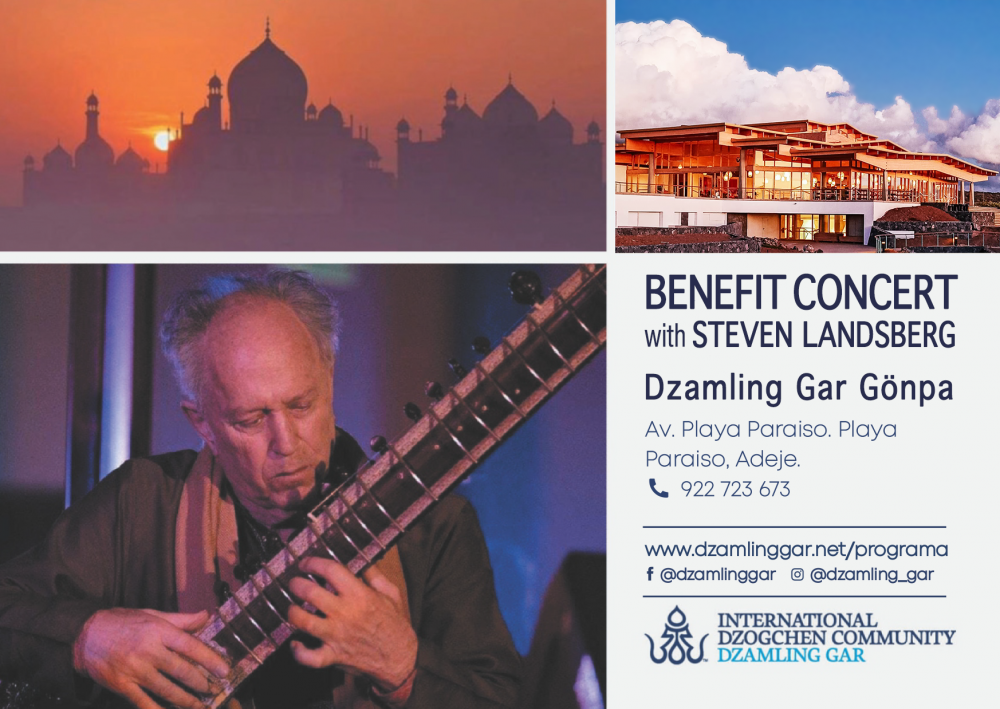 Leading up to Losar we had a well attended Indian music solo concert in the Gönpa and by Zoom on February 25th with Steven Landsberg on sitar. After the concert we had a delicious Indian feast made by Fabian Sanders and his kitchen team in the cafeteria. Since all of the news of Ukraine was very fresh, both of these activities became a benefit for the Ukrainians impacted by the war, and it helped we who are far away feel we could participate with some kind of offering to the victims.

The Losar and Mandarava season started in a subdued fashion due the conflict in Ukraine. But we carried on in the traditional fashion with a very tasty divination soup, made by our “Tibetan” doctors Irina and Medegema, also the fire puja a few days before and then in the early morning of Losar star water dipping, some courageous ones went to the sea before dawn, warm and tasty rice breakfast and chai after in the cafeteria, then the traditional Mandarava practice in the Gönpa, Khaita practice, lunch together, games in the afternoon, then a webcast Ganapuja from Merigar West with Adriano Clemente followed by webcast Khaita practice. On March 5th there was also a live and zoom sang and serkyem practice. So as you can see, the Losar festivities were very complete! 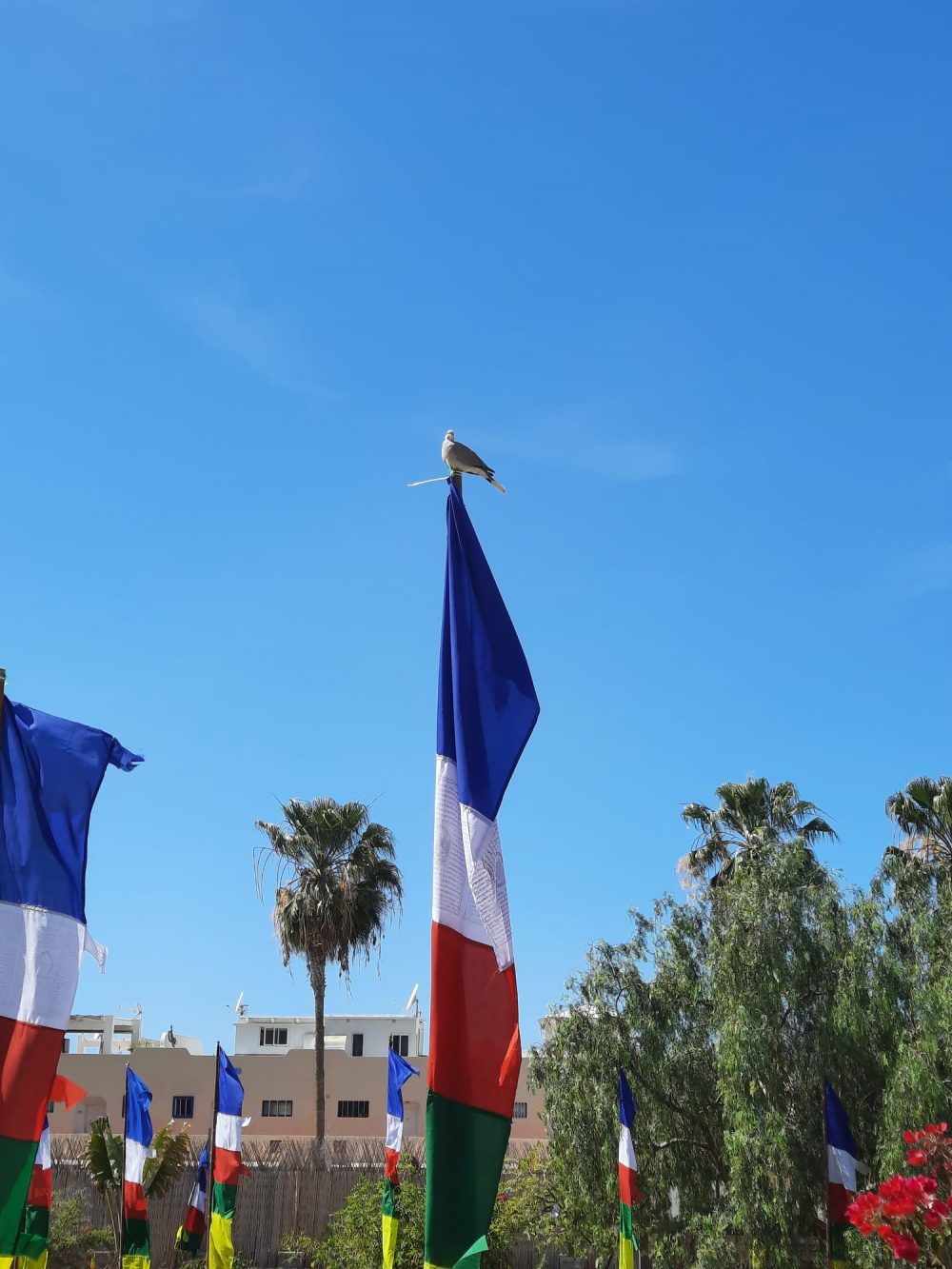 For the two weeks of the Mandarava retreat that traditionally begins on Losar, there was a very rich program. Every morning we would watch a replay of Rinpoche’s Mandarava teachings from the past. Fabio Andrico was ever present and with great skill, endurance and patience, introduced or reintroduced the sogtig and tsalungs of Mandarava and led us very kindly through innumerable practice sessions. There were different forms of Mandarava practice, long and short and essential, and in the afternoons alternate days Nina Robinson did explanations and led practices from her home near Merigar West via Zoom. When Nina was not leading, the Mandarava practice was led in the Gar by webcast and zoom by Sebastien Remy and Naomi Zeitz. There were three talks by Menpa Phuntsog Wangmo on Tibetan Medicine and Mandarava related topics, like sogtig, tsalung and Tibetan Medicine, chudlen, diet and behavior, and the making of tseril pills. For seven days, Fabian Sanders helped us understand the pronunciation and meaning of the Manadarava practice live and by zoom. On the last day we actually did a Mandarava practice with Rinpoche via replay which was wonderful and the feeling was as if he was there with us. 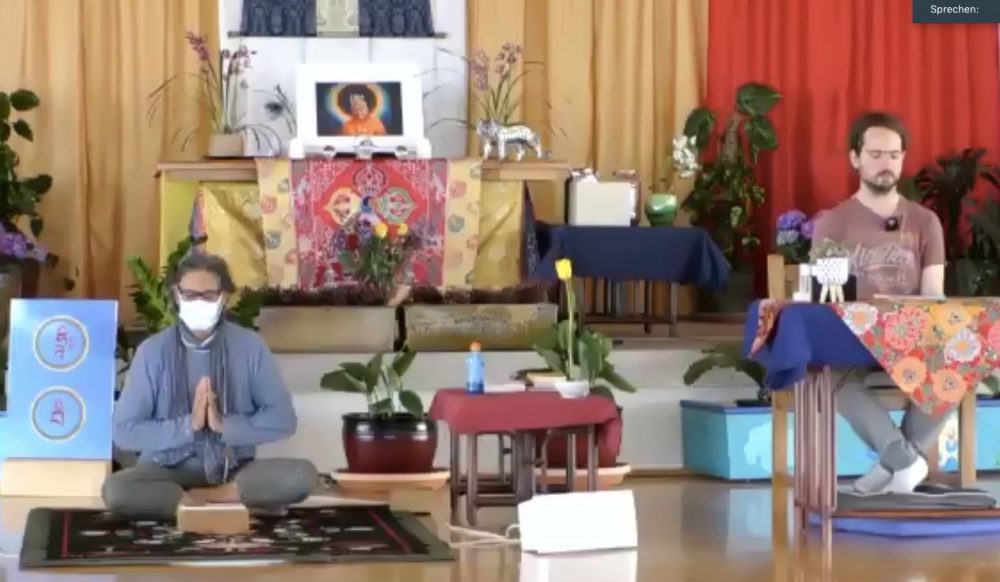 Fabio and Sebastien leading the Mandarava Practice during the retreat 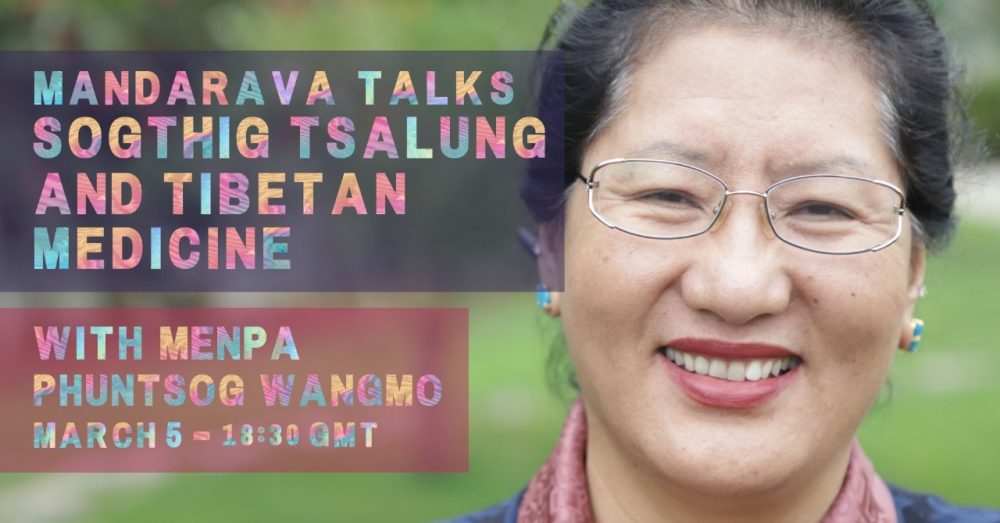 All of the retreat was offered by webcast and zoom, 900 people registered and each day approximately 200 people participated from all corners of the globe. Replays allowed people in various time zones to participate. We owe a debt of gratitude to our Project Manager Vicky
Rodriguez, the Webcast Team and all the karma yogis who managed the retreat.

Not only were there Mandarava practices, but Khaita and Vajra Dance thuns continued throughout the retreat. So there was no lack of activity or practice.

Then on the second to last day of the retreat, there was the grand finale auction, organized and presented by Lena Dumcheva and Tim Cabot with their team of online helpers and lovely Khaita presenters. Before the auction started there were two wonderful performances by our Khaita children and the Khaita dancers, to warm up the crowd, which they certainly succeeded to do.The auction had many beautiful and special treasures, and thanks to the great skill of the auctioneers and the generosity of the international Dzogchen Community, the auction was very successful. There were also four prizes dedicated to the fund to help Ukrainians. 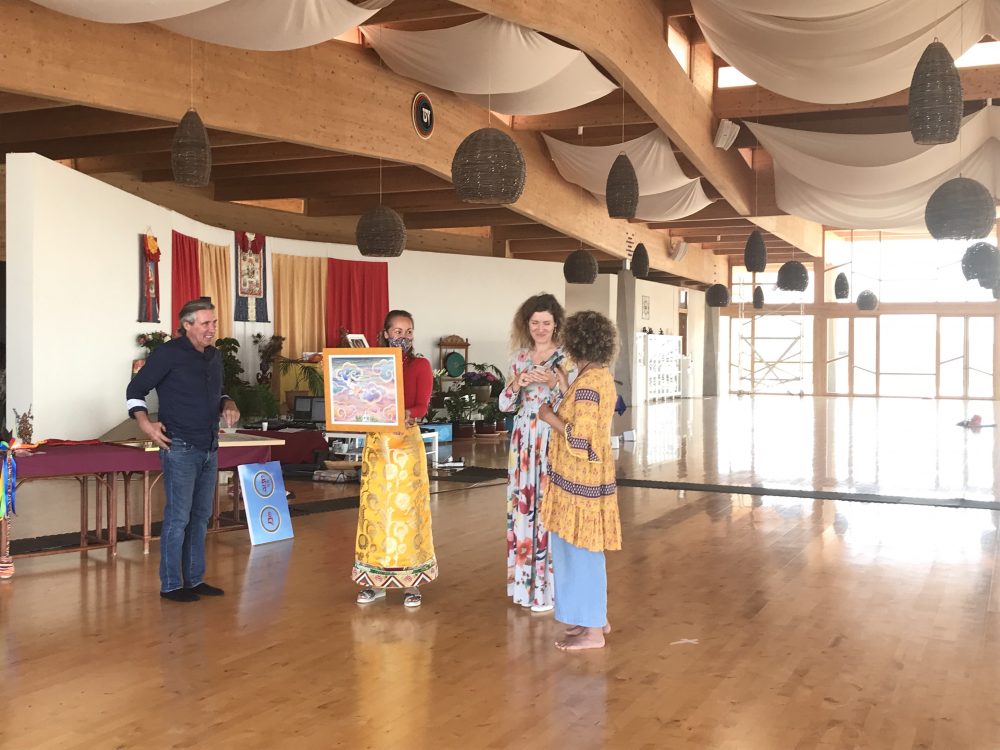 Auctioneers, Simona Marziani and her painting 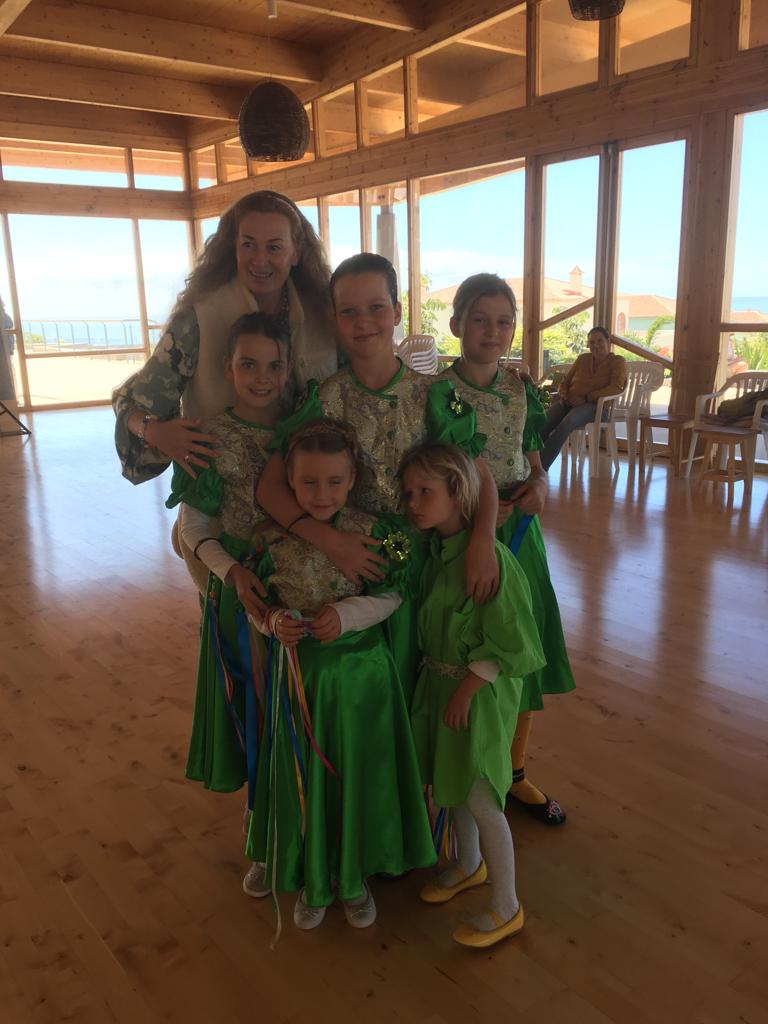 As for the rest of the activities at Dzamling Gar, we have had Yantra Yoga courses with Fabio Andrico and Max Leschenko, Vajra Dance with Luda Kislichenko and Adriana Dal Borgo, Kumar Kumari Teacher Training (https://melong.com/kumar-kumari-teacher-training-at-dzamling-gar) and Yoga for Pregnancy with Laura Evangelisti and Nataly Nitsche; some of these courses were broadcast on zoom. 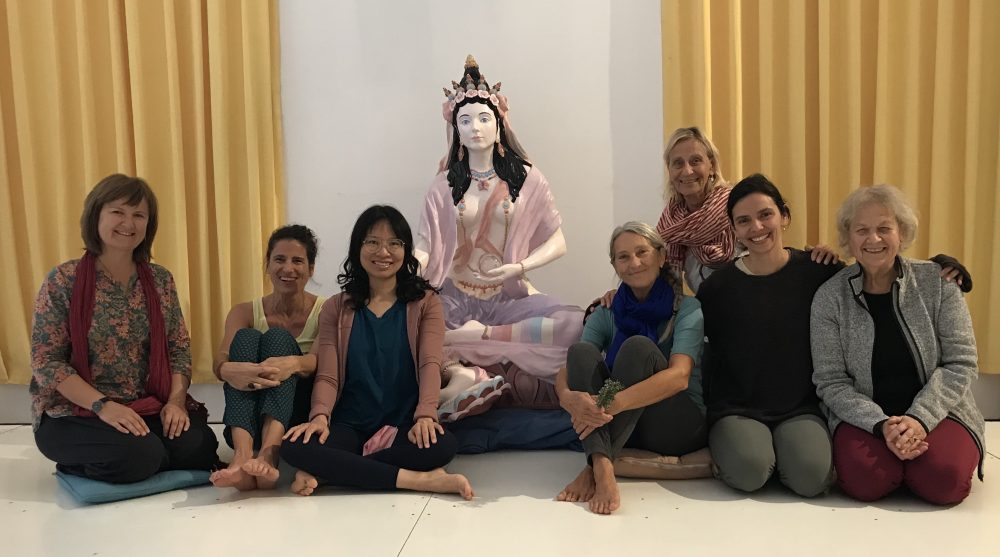 We continue to have our weekly Friday evening dinners in the cafeteria along with our morning breakfasts. There was a special dinner event on March 4th of vareniki and pelmeni, traditional Ukrainian food, run by the Ukrainian practitioners to raise money for their activities.

The Gardens flourish but also have some challenges with the strong winds of the calima. The final Gönpa garden is in process and should be complete by the end of the summer.

This summer the Gönpa will mostly closed for wood treatment and we will use the Gonpino, the underground smaller space below the Gönpa, outdoor spaces and jya kyip for activities. 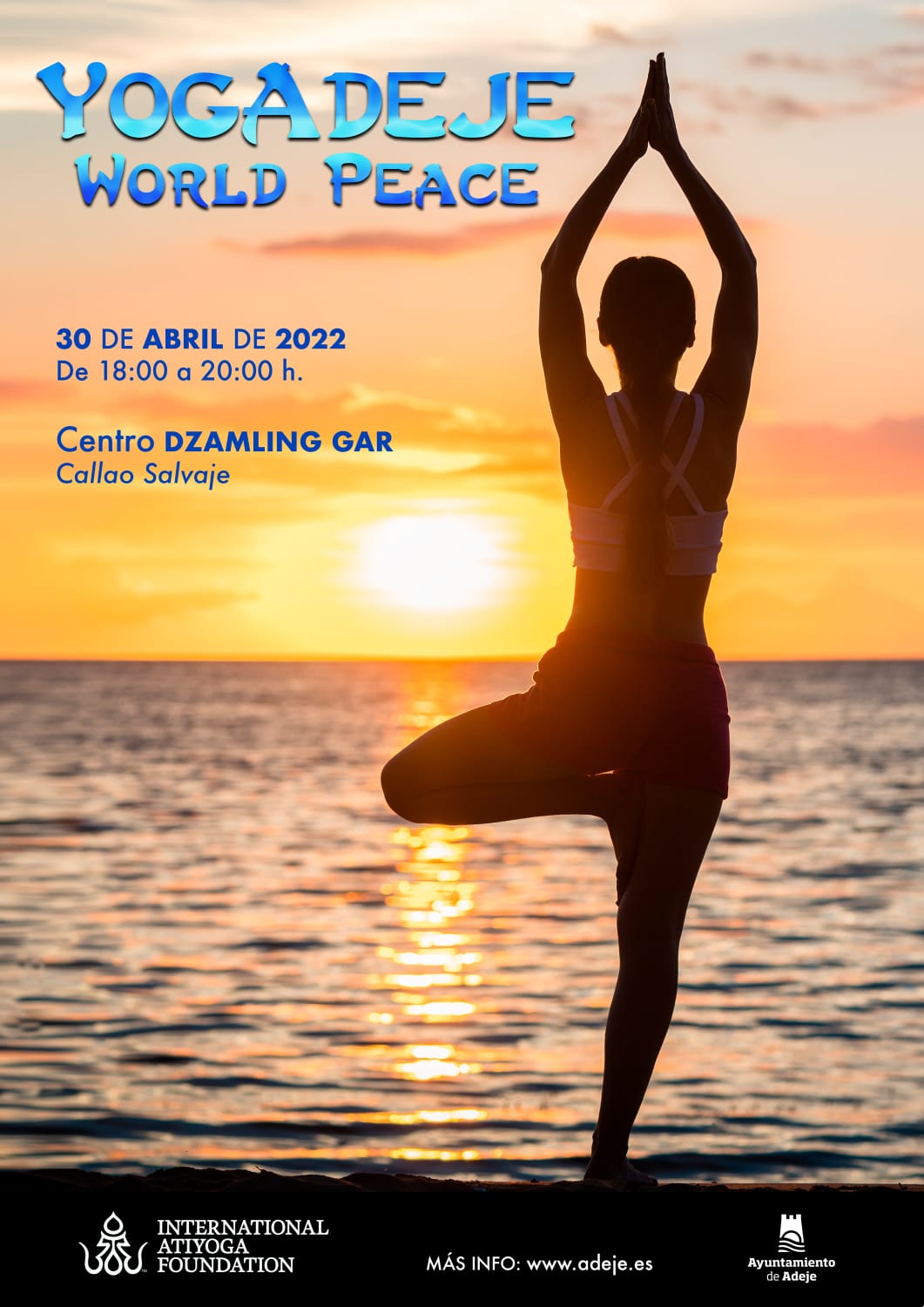