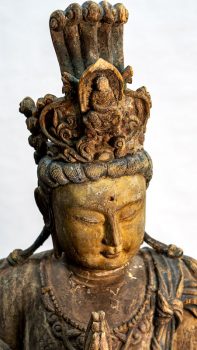 Among the over 250 works of art from across Asia, recently donated to the Namkhai Collection by Constantino Albini, is the extraordinary and literally divine statue of Kuan-Yin, an exquisite example of early Chinese Buddhist sculpture. In order to introduce Kuan-Yin to those in the Community who may not have met her before, and to learn more about her evolution as she traveled through history along the Silk Roads, for those of us who have, we contacted Prof. Chun-fang Yu, who has kindly permitted us to excerpt material from her classic work: “Kuan-yin: The Chinese Transformation of Avalokitesvara” [note 1].  This icon, standing over 150 cm high, will become the centerpiece of a new MACO exhibition dedicated to the diffusion of Buddhism along the Silk Roads.

Prof. Chun-fang Yu’s intriguing book provides new insights into gender, reflected in the dynamics of religious change and the evolution of Buddhist thought and practice within the context of Asia’s cultural and social histories.

For those unfamiliar with Kuan-Yin, the Chinese manifestation of Avalokitesvara, his/her [note 2] journey began in India, first appearing in China, in the third century as but one of Avalokitesvara’s myriad faces of compassion, manifesting from the Buddha realms of the ten directions which offer refuge from the terrors which surround us and empties the hells that may await us.

Avalokitesvara has never been worshiped as a goddess in India, Tibet, Sri Lanka or Southeast Asia. Nor indeed was Kuan-yin perceived to be feminine by the Chinese at first … the sexual transformation from the masculine Avalokitesvara to the feminine Kuan-yin seems to be a unique Chinese phenomenon (in Japan, Korea and Vietnam they identify Kuan-yin as the exemplar of wisdom for meditators and the “Goddess of Mercy”). [Chun-fang Yu, 2000:3]

Kuan-Yin was “a new deity who not only could bring spiritual enlightenment, but also save one from worldly difficulties and grant one material satisfactions as well as a “good death” and postmortem salvation … The Chinese transformation of Kuan-yin can be regarded as a case study for the Chinese transformation of Buddhism…”. [Chun-fang Yu, 2000:4]

“This bodhisattva underwent many transformations by taking on different identities, assuming different appearances in art, and giving rise to different practices and rituals in a number of Asian countries aside from China. In the process, the bodhisattva became domesticated to serve the interests and needs of the host countries that adopted him/her. …

Kuan-yin was perceived as masculine and was so depicted in art prior to and during the Tang (618–907). However, by the early Sung (960–1279), around the eleventh century, some devotees saw Kuan-yin as a female deity and new forms of feminine Kuan-yin images began to be created by Chinese artists. The feminine transformation of the bodhisattva probably reached its completion during the Yüan (1206–1368). Since the Ming, or the fifteenth century, Kuan-yin has generally been perceived and represented as completely feminine.” [Chun-fang Yu, 2000:4]

“The different stages in the evolution of Avalokitesvara’s iconography in India also occurred in China, but with innovations. Starting with the creation of new iconography such as the Water-moon Kuan-yin (who is androgynous) in the tenth century, Chinese artists increasingly depicted the bodhisattva in a clearly feminine fashion after the Sung (960–1279). Beginning with the Ming (1368–1644), if not earlier, there appeared sets of paintings depicting Kuan-yin in five, thirty-two, or fifty-three forms …

These multiple forms of bodhisattva are supposed to be illustrations of the thirty-three manifestations of Kuan-yin in the Lotus Sutra, or the thirty-two in the Surangama Sutra.” [Chun-fang Yu, 2000:14]

Kuan-yin as savior from perils as eulogized in the Lotus Sutra was also a favorite subject among the frescoes in Tun-huang, the terminus of the Silk Route. 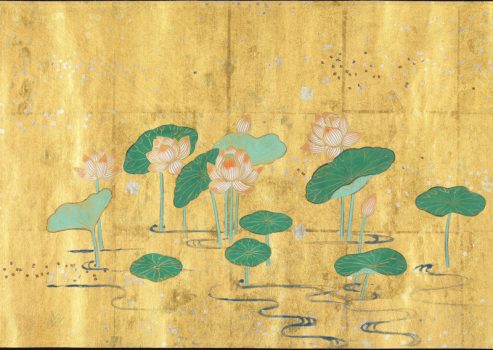 “One of the central scriptures glorifying the bodhisattva is the 25th chapter of the Lotus Sutra, [note 4] (known as the “Universal Gateway”) which was translated into Chinese six times, of which three versions have survived: the version by Dharmarakṣa, a native of Scythia, in 286, Kumarajiva (Kucha), 406 and Jñanagupta and Dharmagupta in 601.” [Chun-fang Yu, 2000: 37-8]

“Prior to the translation of the Lotus Sutra in the third century, there was no Chinese deity to compare with Kuan-yin, who was not only a universal and compassionate saviour, but also easily accessible. The gospel of the “Universal Gateway” preached a new and democratic way of salvation.

There was no specific thing a person had to do to be saved. One did not need to become a scholar learned in scripture, or a paragon of virtue, or a master proficient in meditation. One did not have to follow a special way of life, take up a strange diet, or practice any ritual. The only requirement was to call his/her name. [Chun-fang Yu, 2000:489]

There was no discrimination on the basis of status or gender. And the benefits of worshiping him/her were both spiritual and worldly. It is no wonder that such a message received an immediate and eager response.” [Chun-fang Yu, 2000:491]

“In the Surangama Sutra, a sutra particularly popular since the Sung, Kuan-yin appears in thirty-two forms, of which six are feminine: nun, laywoman, queen, princess, noble lady, and virgin maiden. But in China Kuan-yin did not simply appear as such an undefined woman. In fact, a key factor in the successful indigenization and feminization of this Buddhist deity in China is that through various myths and legends the Chinese managed to transform Avalokitesvara, the ahistorical bodhisattva who transcended temporal and spatial limitations as depicted in the Mahayana scriptures, into Kuanyin, who, known by different Chinese names, led lives in clearly definable times and locations on the soil of China. Only in this way could Kuan-yin conform to the model of Chinese deities. For in China, not only were popular gods such as Kuan-ti and Crazy Chi or the goddess Ma-tsu real people who once lived in specific times and places, … (they) were turned into historical cultural heroes who were venerated as the founding fathers of Chinese civilization. [Chun-fang Yu, 2000:295]

“In the Surangama Sutra, the bodhisattva …  begins by describing how he obtained samadhi by meditating on the organ of hearing … “at first by directing the organ of hearing into the stream of meditation, this organ was detached from its object, and by wiping out (the concept of) both sound and stream-entry, both disturbance and stillness became clearly non-existent. Thus advancing step by step both hearing and its object ceased completely, but I did not stop where they ended. When the awareness of this state and this state itself were realized as non-existent, both subject and object merged into the void, the awareness of which became all embracing ….

The sound mentioned here is not that made by the faithful who cry out his name, but any sound that, when examined (kuan) with penetrating insight, leads to the realization of sunyata. Although the bodhisattva saves beings from various dangers and grants fourteen kinds of fearlessness in this sutra, the reason he can do so is different from that given in the Lotus.” [Chun-fang Yu, 2000: 40-1]

The author argues that, “the choice of a woman instead of a monk reflected not only the gender change in art, but also the rise of a new type of organized lay Buddhism in the Sung that claimed equal validity for lay practice and probably provided more opportunities for women to participate in the religion.” [Chun-fang Yu, 2000:24]

“I see the sexual transformation of the bodhisattva within the framework of his/her domestication … viewed within the larger picture of how Buddhism became Chinese. The feminization of Kuan-yin and new developments in religious Taoism could be seen as responses to the patriarchal stance of institutional Buddhism and Neo-Confucianism. [Chun-fang Yu, 2000:21]

The feminine transformation of Kuan-yin is, of course, not entirely a Chinese innovation, but has a firm scriptural basis. According to the “Universal Gateway” chapter of the Lotus Sutra, Kuan-yin can appear in as many as thirty-three different forms in order to save different types of people. Among these forms, seven are feminine: nun, lay woman, wife of an elder, householder, official, Brahmin, and girl. [Chun-fang Yu, 2000:294]

“In several places, I pointed out that the White-robed Kuan-yin should be seen as an indigenous creation, just as with the Water-moon and Child-giving Kuan-yin. However, instead of treating them as separate and discrete cultic icons for Ch’an monks, literati, and common folks respectively, I suggested that it would be more fruitful as well as more accurate to regard them as different, yet interconnected, aspects of the same deity. The iconography of the White-robed Kuan-yin was derived from that of the Water-moon and it in turn evolved into that of the Child-giving Kuan-yin. I could not have arrived at this conclusion on the basis of artistic style, for each manifestation is very different. Rather, I did so on the basis of evidence drawn from miracle tales, indigenous scriptures, and descriptions of ritual practices.

I also suggested that it would be more useful to uncover the rich complexity of associations represented by any one image, story or text to diverse audiences, instead of assigning either one monolithic meaning to it or confining it to one single constituency. It is of course true that Kuan-yin was seen and understood differently by different people. It is also the case that different people sought different things from the deity.” [Chun-fang Yu, 2000:488]

One of the most touching stories of Kuan-yin’s radiant compassion is recounted by the author in her preface, when, as a child, fleeing mainland China with her family, her grandmother’s vision of Kuan-yin saved her entire family from a disastrous ferry accident. This very personal memory of the author adds an aura of the miraculous to the entire text which follows – and for which we deeply thank her grandmother (and of course, above all, Kuan-Yin).

The Museum of Asian Art and Culture was founded by Rinpoche with the express intention of sharing his Collection with the public. This has found resonance within the local administration of Arcidosso, the Region of Tuscany and the Union of Italian Buddhists (UBI), as well as others, like Constantino, who have made generous and substantial donations to the Museum. This of course includes the time and energy of the many, many volunteers who have made this museum possible.

As all donations to the museum become a part of and contribute to the enrichment of the Namkhai Collection, in a small but concrete way these donations represents a token of our appreciation and gratitude to Rinpoche and the infinite light of his compassion and endless generosity, which we all share and which has never dimmed.

We have done our best to continue to build his Collection and again we thank everyone who has shared with us this objective and are helping us to realize it. It is my personal belief that donors interested in making a contribution to the museum will accrue infinitely more merit by making their donations directly to Rinpoche and his Collection, rather than to a small cultural institution on a Tuscan hillside.

With each donation the Museum grows and evolves, helping us to present to the public the vibrancy of Asian art and culture and how they continue to illuminate the world.

Museum of Asian Art and Culture

Any errors in transcription or misquotation of Prof. Chun-fang Yu, is entirely the fault of the MACO.

Other works by Prof. Chun-fang Yu:

Note 1. Chun-fang Yu, “Kuan-yin: The Chinese Trans- formation of Avalokitesvara”, Colombia University Press, New York, 2000.
Note 2. Prof. Chun-fang Yu mentions that “the inclusive she/he seems to be the best way of referring to Kuan-yin” ibid. p. 7.
Note 3. David Lopez provides a contemporary key to reading the Lotus Sutra and appreciating its his- torical position in the evolution of Buddhism as it moved across the Silk Roads, in an interview about his book: The Lotus Suˉtra: A Biography, Princeton University Press, New Jersey, 2017 in Tricycle (https://tricycle.org/magazine/lotus-sutra-history/) 4 The “Universal Gateway”, Chapter 25th of the Lotus Sutra: https://www.nichirenlibrary.org/en/ lsoc/Content/25