Memories. I don’t even know how many years have passed … one evening at the Olympic Theater in Rome, almost by chance, I found myself attending a performance by Tibetan monks. At the last moment there was still a seat. At the theater I met Laura Albini, a schoolfriend of my mother, who told me about the Karmapa and a great Dzogchen teacher who lives in Naples, but who doesn’t want to teach.

Later I received the Buddhist Refuge at Laura’s house from Lama Gendun who was passing through Rome. There was a rumor that perhaps Namkai Norbu, the master from Naples, had been convinced [to give teachings] and that Laura was organizing a retreat in Subiaco for the summer.

Subiaco – a long tree-lined avenue led to the villa. It was the weekend and I was very curious. A group of young people had already been there for a few days.

Norbu Rinpoche: I was strongly impressed by his simplicity and spontaneity. He spoke and always seemed to speak to you among the group and directly to your heart.

The days went by, nothing was organized, we lived together (we were 15-20 people), we ate, talked, walked and the Teaching sprung up spontaneously in the most unexpected moments. Norbu Rinpoche’s way of life was itself a Teaching. I decided to return the following week and then I stayed for all my summer holidays.

I was obsessed with taking notes and each time I returned I tried to get people to tell me about the practices and concepts that we received continuously so that I could copy them. My memory made me write down everything possible in order to review it and try to understand it rationally and more deeply. I hadn’t understood yet the importance of deep understanding beyond the schemes of the mind and Direct Introduction.

Guru Yoga, Chod and Dorje Legpa were the first “sung” Teachings that even today I am not able to recite – I am very out of tune – but in the group I was able to do my part even if my shrill voice often stood out when it shouldn’t have. 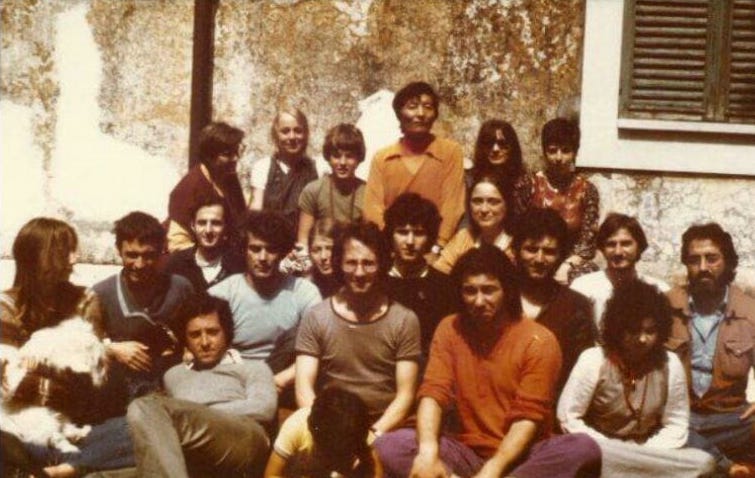 Every evening we practiced together and then Norbu Rinpoche would talk to us. It was often difficult to stay up until very late, but no one was willing to go to sleep until the Master bid us good night. Then in the morning we would appear for breakfast randomly while the Master was always there working and with new ideas for the day.

They were intense and pleasant days. Step by step Rinpoche opened up a new world in front of our eyes and in our hearts, always ready to use anything to stimulate us and make us understand. One day he carved a whistle from a reed he had collected during a walk and asked us to try to play it. Nobody succeeded because the whistle only made rough whistling noises. In the end he said he would unravel the mystery and play it himself. Putting it to the test, the whistle emitted the same puffs and noises as before: that was its sound …

The retreat at Subiaco had been over for many months now, the impact had been strong and the group that had followed it – those who knew Laura and met at her home – tried to practice and deepen the message they had received. We were all very overwhelmed. The message was so great and profound it had left me shaken: finally a path that I felt very deeply about and that gave us a key to understanding our existence, meaningful at all levels.

At that time there were not many possibilities to find information on Buddhism – it hadn’t become trendy yet – and there were only a few texts, and only for people in the know. We passed between practice meetings at Laura’s (where a Karmapa center still officially existed) and meetings among ourselves to exchange opinions and explanations. It was very difficult to fully understand the iconography and symbols of the Teaching, but Costantino, who was perhaps the most knowledgeable in theory, was of great help even at that time. I had few notes and above all not in organic form given my partial participation in the Subiaco retreat, but I jealously kept them and organized them. My fixation for taking notes lasted for many years and my short memory forced me to write as much as possible. It seemed to be the only way that I could have a record to use as a basis for practice. 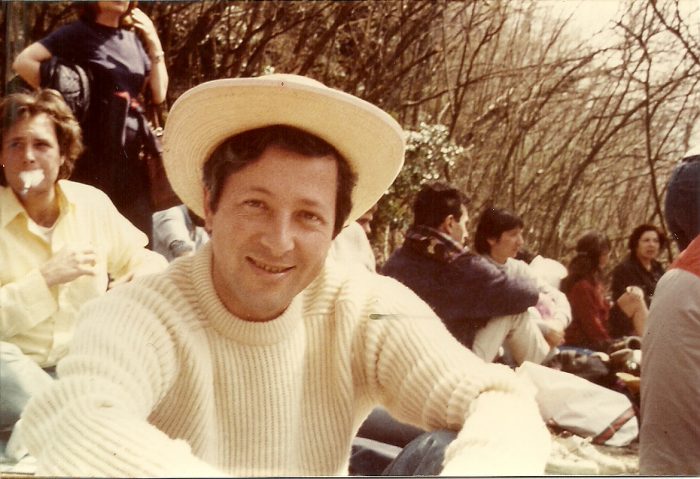 Summer was approaching and we didn’t know where the next retreat would take place. Finally there was news that there was some land near Prata, in Campania, owned by Norbu Rinpoche, where we could meet without too many problems. Although there was water [on the land] unfortunately there was nothing else and we would have to organize ourselves with the tents and prepare everything that was needed for shared facilities.

The valley in the woods was very beautiful. I don’t remember exactly how many we were, but the number had already increased considerably compared to the first retreat. The tents were scattered  everywhere and it was an extremely mixed camp, both as tents and as inhabitants. Everyone had chosen the place that he or she considered the most beautiful and comfortable, but we set ourselves up as best we could.

This time, given the number of participants, we had to organize teaching and collective practice at well-defined times, although Rinpoche was always available, at any moment, always ready to give explanations or support to those who needed it. .

In the meantime I had met Claudio and Maria. He was an excellent cook and both were nice and helpful. The decision to put the tents close together and share the experience, space, and organization was automatic. As a matter of fact, in our tents we ate much better than in the others and had many comforts – among other things we always had fresh water – so we were nicknamed “Club Med”[ed. the famous holiday resort]. In the evening, the so-called pretas, that is, the people who were completely disorganized and were hungry, would roam around the camp looking for people willing to share a meal. Of course the Club Med was one of the favorite destinations where there was always something decent to eat. I still remember the very special soups that Claudio was able to prepare on a really ridiculous stove.

One day two new people arrived from northern Italy, Fabio Andrico and Tiziana Gottardi, and set up camp without a tent on the edge of the field in an area protected by trees and bushes. They immediately aroused the curiosity of many as they were dressed in white cotton, with a very Indian and ascetic look. They kept to themselves, but never missed the Teaching.

The rain was our greatest enemy and if it had rained hard, considering the conditions of the camp, there would have been serious problems for us all. Dorje Legpa helped us a lot; more than once the rain approached in a threatening way but changed its course due to an intense practice of this Guardian. Norbu Rinpoche led us in the practice sounding the damaru and the bell: he smiled and said not to worry.

The inhabitants of the nearby village considered us to be mad people who did strange practices in the woods. They were very curious but also afraid and only a few came to see and hear what was going on. However, they greatly appreciated the fact that everyone, more or less, went shopping in the village.

With my fixation on taking notes I was always one of the first at the Teaching and sat next to the Master so that I could record all the teachings with a small tape recorder. Unfortunately all the tapes, which I gave to a practitioner to keep and make available to the Community when I left Rome, were lost. There is a complete transcript of the retreat which should be in the Merigar library. There were some major discussions on how to do transcriptions of the Master’s teaching: should you transcribe the Master’s somewhat difficult Italian word for word or should you put the text in fluent Italian? The choice fell on the middle way: just a few small adjustments to make reading easier and not to run the risk of changing the profound meaning that Rinpoche gave in his talks. We did not feel capable of interpreting the text and re-proposing it in perfect form.

The publication of the volume was a considerable effort, typed (at that time there were few people with computers) and photocopied in I don’t remember how many copies. I shouldn’t be but I’m still very proud and happy with the effort we made.

The Practice became deeper and consolidated and little by little it began to be part of our lives. Convinced that one of his tasks in this life was to transmit the Teaching, Norbu Rinpoche no longer held himself back [from giving Teaching], with a determination and a devoted enthusiasm that I still admire today.