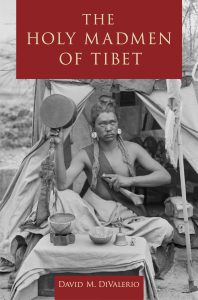 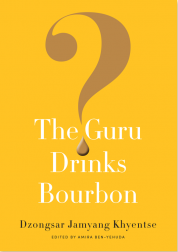 Drukpa Kunley is firmly embedded in the popular imagination as the most famous and outrageous of all Tibet’s anarchic yogin-saints. He is a scandalously priapic and scatological figure, making love to women in public, stealing other men’s wives, breaking wind in the assembly hall of monasteries and urinating on precious religious paintings. He is widely heralded as the archetype of so-called “crazy wisdom”, a state of realization held to transcend all civilized propriety and social norms. It therefore comes as some surprise to see him depicted, in David DiValerio’s The Holy Madmen of Tibet, as “sober, thoughtful, and in some ways rather conservative.” Scholarly reappraisals do not come much more dramatic than this.

DiValerio contends that Tibetan Buddhists are so in thrall to the ideal of the mahasiddha, whose behaviour is understood to be a spontaneous outpouring of their enlightened state, that they are too quick to identify eccentric or antinomian traits as manifestations of this kind of inspired activity. His fascinating book is, in large part, a careful drawing out of the different nuances of the Tibetan word “mad” (smyon) – which can be applied, for instance, to the holding of an unorthodox philosophical view of “emptiness”. He presents a close reading of the biographies of three influential “holy madmen” of the 15th/16th centuries: the Madman of U, the Madman of Tsang and Drukpa Kunley himself, sometimes known as the Madman of Bhutan.

The contemporary lama and celebrated filmmaker Dzongsar Jamyang Khyentse Rinpoche advocates similar careful scrutiny in The Guru Drinks Bourbon?, his guide on how to approach a Vajrayana master. “The ‘experience of great spontaneity’ is one of the great Dzogchen terms,” he writes, “but these days many lamas, especially the younger ones, become so intoxicated by notions of ‘spontaneity’ and ‘unfabricated’ that the whole subject has become a joke. None of us really know what spontaneity is.” And he issues a warning about gurus who act as if they are beyond mundane concerns – even if they may have a degree of supernatural power. “They don’t care about benefitting sentient beings,” he advises, “They don’t care that their activities may end up harming or disillusioning someone.”

The Madmen of U and Tsang, we learn, both ate the brains from human corpses. They dressed up in the garb of wrathful deities, smearing their bodies with ashes, blood and fat, whilst wearing intestines as necklaces. Running the very real risk of being beaten up or killed, they would then go about in public and act provocatively, often deliberately cocking a snook at important people. DiValerio argues that such behaviour was specifically enjoined in tantric manuals under the rubric of the “practice of observance” (brtul zhugs spyod pa): part of the path of training for yogins who have “achieved heat” and often associated with the “practice of cutting” (chod). In other words, it was not spontaneous, but deliberate and self-conscious.

Drukpa Kunley, meanwhile, seems to have first earned the nickname of “mad” for simply abandoning monastic celibacy and taking a female partner and, later, for becoming a scabrous social critic. DiValerio distinguishes between a text known as his “dirty stories” or “secret biography” and four other volumes of his “miscellaneous writings”. The first forms the core of the influential modern biography, composed in 1966 by a Bhutanese scholar and then translated into English by Keith Dowman in 1982 as the popular The Divine Madman: The Sublime Life and Songs of Drukpa Kunley. The four “miscellaneous” volumes, according to DiValerio, reveal a very different sort of character: “highly astute and relatively conventional.”

Curiously, this revised version of Drukpa Kunley is uncannily reminiscent of Dzongsar Khyentse Rinpoche himself. Both were born into a form of dharma royalty. Both share the same slightly ambiguous mode of dress: Kunley describes himself as a “monastic householder” (ser khyim pa), just as Khyentse wears maroon robes and has a shaved head, whilst not actually being a monk. Kunley’s altercations with scholastic monks foreshadow Khyentse’s clashes with Oxford academics. Both are free-spirited wanderers – Kunley of the Himalayan regions and Khyentse of the modern, global dharma village of airports and internet – taking aim at hypocrisy wherever they find it and delighting us with their witty and provocative views on Tibetan Buddhist affairs.

They share similar targets: the rapaciousness of 15th century Tibetan lamas, for instance, is mirrored in the tale of a contemporary lama sending his brother to size up the assets of his western centre. Both rejoice in irony and self-deprecation: Kunley insists that he has no talent and is unqualified to teach the dharma; Khyentse unnerves his own students – his own “circle of groupies” – with his self-professed “fake humility”. The dedication of his book – “To all the charlatans – without you the spiritual journey would be just too boring” – is reminiscent of one of Drukpa Kunley’s proclamations: “I prostrate to those who exchange the dharma for wealth!”

Khyentse Rinpoche pays homage to Drukpa Kunley, for representing an alternative to the Buddha’s more mainstream disciples, those “serene, with bare feet and a begging bowl.” Yet, upon reflection, Khyentse seems personally less indebted to the lifestyle of the libertine rogue of popular tradition, than he is to a certain rhetorical and literary tradition represented by the more sober figure of DiValerio’s study. Khyentse’s wide-ranging and generous-spirited book should be both immensely helpful and highly stimulating to anyone negotiating the difficult route towards the outer, inner and secret guru. He is serious and passionate about devotion and truth, whilst also being playful, teasing and contrarian: “The concept of ‘healthy’ and ‘normal’ that a therapist is trying to nurture is probably exactly what the guru is trying to eradicate.”

He relishes the ambiguity of the whole situation. “People claiming to have guru devotion often tend to be mere sycophants,” he says at one point, whilst later pointing out that the pride probably involved in making such judgments about others “will only destroy us.” He acknowledges the possibility of making an offering of sex to the lama, but also says that “the likelihood of a guru who knows how to turn desire and passion into the path meeting a disciple who can handle it is almost zero, and the chances of one of them developing attachment are very high.” Once a student has taken initiation, he writes, “if you slander the guru, or even point out negative facts about the guru, it will destroy the seed of your pure perception,” whilst later including sections on how to disagree with or withdraw from the guru.

A word, in conclusion, about Chogyam Trungpa Rinpoche, the contemporary “crazy wisdom” lama, par excellence. Khyentse admires and praises him for his effectiveness in bringing so many people to the dharma. “Are there any serene, gentle monastics from [his] generation who have accomplished this much in the West? I’m still looking,” he writes. DiValerio, whilst acknowledging Trungpa’s many achievements, strikes a characteristically scholarly note of caution. He is not aware of any source for the actual term “crazy wisdom” (ye shes ’chol ba) and quotes the Dalai Lama as saying this is “new vocabulary”. What Trungpa created, he concludes, “must be seen as his own formulation, despite his claim that he was conforming to tradition.”