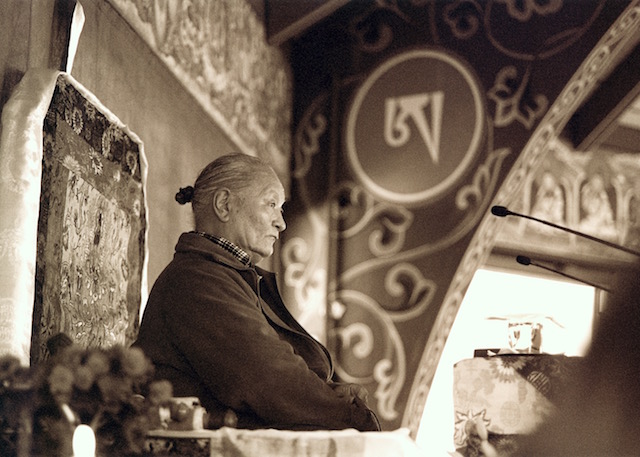 The six-day practice retreat to commemorate the second anniversary of the passing of Chögyal Namkhai Norbu held at Merigar West in Tuscany concluded on Sunday September 27. Following in the footsteps of so many retreats with Rinpoche and typical of the Fire Mountain, Mt. Amiata, where the Gar is situated, this retreat also underwent the full force of the four seasons, ranging from summer sun and gentle breeze in the first days, battered by hail storms in between, and concluded with a snow storm – at least on the top of the mountain – and a fall in temperature that left practitioners in the Gönpa huddled in blankets, scarves, and woolly hats on the final day. 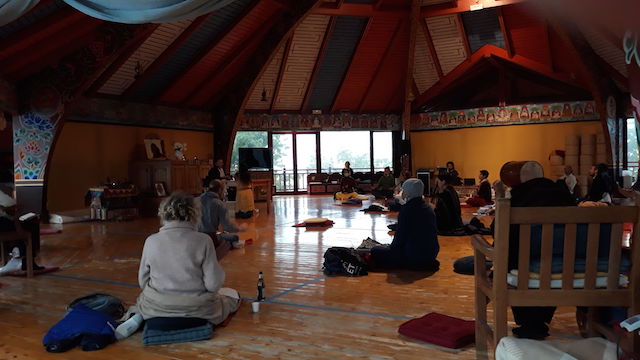 It was not a typical retreat due to Covid 19 restrictions – rigidly adhered to at the Gar – however the Gönpa was able to accommodate just over 40 people for the intense schedule of practice sessions each day, all of which were webcast, and each guided by various students of Rinpoche. The Gönpa was divided into spaces,  clearly marked with colored tape, in a way that permitted social distancing, while masks were worn while moving around but not when seated. Rapidly becoming a familiar routine, these restrictions have, however, made it possible to keep Merigar open and active while operating within the norms of local regulations. In spite of the increasingly difficult health regulations in Europe there were many practitioners from various parts of Italy who came to participate in these days of intensive practice. 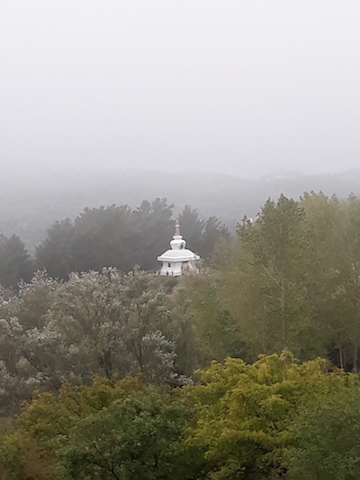 At this point it is essential to mention the dedicated webcast team who were untiring and meticulous in their work, and the webcast website which provides not only free access to join and follow activities but, as in the case of this practice retreat, also practices texts that can be downloaded. As the current world situation continues with restrictions on movement at the local and international level, it becomes increasingly important for Dzogchen Community people to be able to access talks, webinars, course, and practices online. At the moment, the possibly to ‘connect’ provides a means to be together, practice together, and share experiences and knowledge. During these six days of practice there were hundreds of connections for each individual practice session culminating in well over a thousand per day for the final weekend.

During this intense few days of practice on September 26 the Mandala Hall at the Gar became the venue for a vibrant art exhibition organized by Dynamic Space of the Elements and Merigar featuring works from different artists in the Dzogchen Community but with a common thread linking them to the Teaching. The highlight of the exhibition was part of Chögyal Namkhai Norbu’s vast collection of assorted flutes that he had gathered from many different places. The exhibition will be open until October 4. 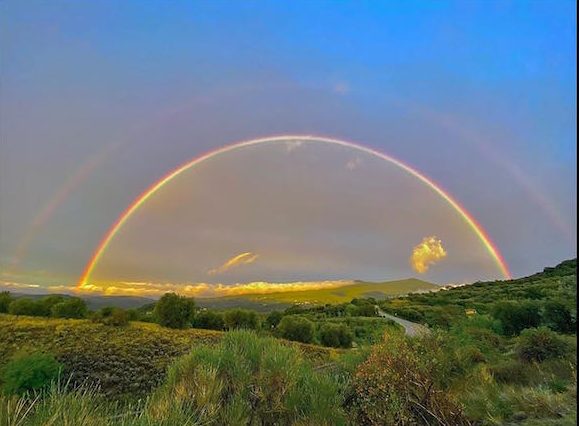 On the final day of the practice retreat, those present gathered under the guidance of ‘Lotsawa’ Adriano Clemente to perform a long Ganapuja followed by the Invocation of the Lamp, a moment to help us recall that we are treading the same path together, as a single group, inseparable, until enlightenment. A fitting closing to these intense days of practice.