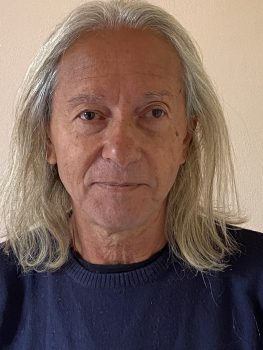 When for the first time I met my root Master, Chögyal Namkhai Norbu, I had an experience that I’ll never forget. It was 1980 and the Dalai Lama was in Rome to meet Pope John Paul II. On that occasion, His Holiness held an open lecture giving a teaching about compassion and equanimity. The same year I had started to know and practice Tibetan Buddhism. I had already received teachings from different Masters of the Gelugpa and Nyimapa traditions.

I had met a few students of Chögyal Namkhai Norbu and through listening to the recordings of his Dzogchen teachings I was quite moved by them, since they were very direct, practical but at the same time very deep.  I thought: “This is what I have been looking for since ever.” I wrote a letter to Chögyal Namkhai Norbu, at the time there were no e-mails, asking him for permission to attend one of his teaching retreats. So far I was still waiting for his reply, but in the meantime I dreamed of him coming to me riding a horse.

I was overwhelmed by happiness when I saw him in Rome at the audience at the Dalai Lama conference. Of course, he looked different from the idealized figure I had seen in my dream, he didn’t arrive on a horse surrounded by a retinue of knights, but instead by car together with many of his students.

At the end of the lecture, everybody gathered around the Dalai Lama. Someone offered a khatag, others asked for a blessing or some spiritual advice. Instead, I was looking for Professor Chögyal Namkhai Norbu (at that time he was a teacher of Tibetan language and culture at Naples University), hoping eventually to talk with him.

So I approached him and introduced myself, saying that I was that Federico who had written to him to know how and when I could take part into one of his teaching retreats. He answered that later on there would be such a possibility, but he gave me no clues about it. The Dzogchen Community didn’t exist yet as an organized association, there was neither a Gakyil nor other people officially in charge of organizing the retreats of the Master.

Thus, although I had introduced myself and despite his statement about a future meeting, I was still not satisfied. Inside me I nurtured the hope of asking him about what I had listened to in the recordings of his teachings, in which he talked about the nature of the mind.

I saw him going out to the garden and went after him. As I was coming closer to him, many questions were swirling in my mind and I was sorting out the one that I would begin with. But when I got  quite close to him, Chögyal Namkhai Norbu turned abruptly and stared right into my eyes and at the very same moment, all my thoughts disappeared and I could only feel an indescribable emptiness.

I was astonished. As soon as I recovered from that amazement, he had turned again and went on walking calmly around the garden. So I devised to try again and, even if my mind was fumbling in the emptiness, I made an effort to think about a clever question and again I walked towards him.

As had happened before, he turned and looked at me and again I found myself in a state of naked awareness totally devoid of thoughts. There was no more quest of asking questions, the answers were already there. In the meantime, a car had come to the entrance, the Master got into it and left. 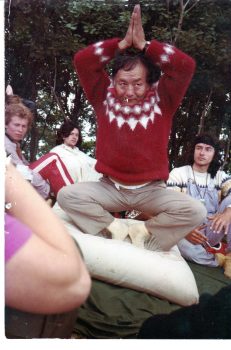 Rinpoche demonstrating the position of Rushen of the Body at Merigar in the 1980s. In the background Enrico Dell’Angelo (left) and Federico (right).

Later, when I took part in his retreats of teaching and practice, I understood that this day I had had the luck of receiving the direct introduction to the state of rigpa, the primordial awareness which is our real nature.

It is a priceless gift to receive direct introduction from the Master by means of an unconventional experience, not prearranged within a context where usually the teachings are bestowed, such as during a retreat or a formal initiation where different symbolic items are used.  A Dzogchen Master is able to give direct introduction also during everyday life, in a seemingly fortuitous moment when the student doesn’t expect it at all, by means of a phrase, a gesture or, such as in my case, a gaze.

It all depends on the karmic relationship between the Master and the student, and also from their mutual capacities. If the student is absent-minded and has no devotion, which basically means openness with no bias, then it is difficult he will receive anything.

A few weeks later, I managed to get the phone number of the Master and asked him if I could pay him a visit together with a girl from Rome, the same person who let me listen to the recordings of his teachings about Dzogchen Semde. Chögyal Namkhai Norbu agreed.

In those days he lived in Formia and so we arrived unhurriedly from Rome at his house in the middle of the morning. He greeted us and sat us in the living room. We started to talk with him. I asked him many questions about the meditation practice and Dzogchen. I never have had such a relationship with a Master.

My previous experiences concerned the Gelugpa lama of Pomaia, where I had spent a month listening to teachings about lam rim, the gradual path. I remember that once, at the end of a teaching session, I asked the Lama if there was a possibility of a direct path towards enlightenment. When I uttered that question, the Italian monks and the students who were there in the gönpa burst into laughter. The Lama answered by stressing the necessity of the gradual path. He was a good Geshe and I am happy to have received his teachings, since I had the opportunity to understand better the difference between Sutra, Tantra, and Dzogchen. To tell the truth, meditating on impermanence for a person like me, who experienced the loss of my father when I was three years old, perhaps is not so mandatory, since direct experience greatly overcomes any conceptual elaboration.

One day a few practitioners from Como arrived there, at Pomaia. I became friends with them and they told me that they were going to France, to attend a Dzogchen retreat held by Dudjom Rinpoche. Something sounded inside me and so I asked if I could join them. They happily agreed and it was a wonderful experience. I received from Dudjom Rinpoche and Sogyal Rinpoche my first Dzogchen teachings, together with the Vajrasattva and Amitayus initiations. I remember that Sogyal Rinpoche said to me: “Since you are living in Italy, go and attend the teachings of Chögyal Namkhai Norbu.” 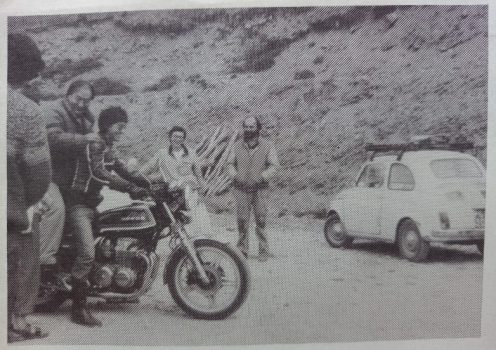 Rinpoche getting on Federico’s bike at Merigar. Photo by Karin Koppensteiner, for the cover of the booklet of poems “Amiata” by Louise Landes-Levi, 1984.

And there in Formia it was something different, extraordinary. I was sitting in front of a living Buddha who was talking to me sitting on a chair, not on a throne, that is, we were sitting at the same level. There were neither regulations nor frills, everything was flowing in a direct and natural way. At a certain moment, the Master stood up and came back after a few minutes bearing two dishes full of food for us. It was lunch time and he had brought us something from the meal prepared for the family. Our happiness about being there overcame our embarrassment, also because the situation was so relaxed that it didn’t come at all to our mind that we might be a bother.

After lunch, we sat in the kitchen and went on receiving teachings in this way, talking until late afternoon, when Rinpoche’s young son came home from school.

Then we took our leave and gave infinite thanks to the Master, apologizing for our intrusiveness. That day the Master was extraordinarily kind and gave us everything: teachings, food, and even Tibetan medicines.

When we left, it was sunset time. I looked up at the celestial sphere where the first stars were starting to blink. I felt so light that I seemed to be flying instead of walking.