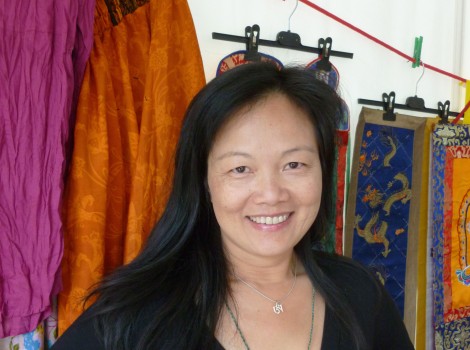 I was born in China and grew up during the Cultural Revolution, before moving to Hong Kong when I was 14. People call me Red because my Chinese name is Liu Dan Hong, in which Dan Hong means ‘red peony’. At school in Hong Kong, they translated my name into English and Red became my nickname.

When I was 23, I met my sifu – a Chan Tai Chi master, both Buddhist and Taoist – on a train. He was a layman, who dressed in ordinary clothes and taught in a very low key fashion, never seeking any publicity. I began to study Tai Chi with him, but soon realized I was not suited to that discipline. But the sifu continued to be an influence on me. He gave me a lot of general advice about how to live my life, taught me about the Buddha and read Taoist and Buddhist poems to me. When I decided to go and study in England at the age of 25, he gave me a mantra – Om mani padme hum – which I chanted a lot.

Ten months after leaving Hong Kong, I was married and living with my new English husband in the cathedral city of Salisbury. I had two daughters: Kimberley, who is now 19 and Ella, who sadly died from a brain tumour when she was only three and a half. My husband had a business selling and installing fireplaces, while I ran a B&B [bed and breakfast] in our house. After Ella died, we adopted a little Chinese girl called Ting, who is now 12.

One of our English friends in Salisbury, my daughter’s godmother, is a Theravada Buddhist. Through her, I began to visit Amaravati, a Theravada monastery just outside London and home of the famous American monk Ajahn Sumedho. We also went to summer school gatherings at a big house in the countryside called Gaunts House, with workshops on many different spiritual traditions. One of the speakers there was a Gelugpa monk from Kathmandu, called Geshe Ngawang Sherap. I remember sitting outside under a tree, listening to him teach in this very relaxed, open and down to earth manner about the mind and the emotions. For a few years afterwards, he accepted an invitation to visit us in Salisbury, where a small group would gather in our conservatory to receive teachings in an informal way. Geshe La has many students in South America and told us about another Tibetan lama teaching in Venezuela, but I did not realize then that he was referring to Chögyal Namkhai Norbu.

At about this time, another Gelugpa teacher – Geshe Tashi from the Jamyang Centre in London – was also visiting Salisbury and I became involved in his group, too. Geshe Ngawang Sherap and Geshe Tashi were at college together, but teach in very different ways. Geshe Tashi’s style is more formal: from him I gained a grounding in fundamental Buddhist concepts, such as the Four Noble Truths, the Path to Enlightenment and the Twelvefold Chain of Interdependent Arising. I am not very intellectual, so all this study was quite hard for me. During this period, I saw the beautiful Tibetan singer Yungchen Lhamo performing at a world music festival and had the pleasure of spending a bit of time with her. Quite a few of her songs are some of the ones we now sing and dance with Rinpoche in the Dzogchen Community.

Then, when my daughter Ella became ill, we met these wonderful Pure Land Buddhists from the Fo Kuang Shan Temple in London. They came to see us at the children’s hospital in Great Ormond Street in London and eventually helped to create Ella’s Buddhist funeral in Salisbury. For some time afterwards, I spent many Sundays at their temple and took the Five Precepts from their very venerable teacher Master Hsing Yun. I had to wear a special brown robe to take the precepts and continued to wear this robe when I chanted at home. I even asked these Pure Land Buddhists about becoming a nun in Taiwan – but they said I was too old!

Through my involvement with Geshe Tashi, in 2008 I ended up visiting the Istituto Lama Tzong Khapa in Pomaia, Italy, not far from Merigar. I had seen advertisements for retreats with Chögyal Namkhai Norbu and felt interested. One day, a group of people from Pomaia decided to drive to Merigar, but much to my disappointment there was no room in the car for me. Living so far away from England, I did not know whether I would ever have the chance to see Rinpoche again. I just had to be content with reading my copy of The Crystal and the Way of Light.

However, as it turned out, I did see Rinpoche only two years later, when he came to London in 2010, his first visit to the UK since 1998. One of my Gelugpa friends walked out of the teaching – on The Three Statements of Garab Dorje – but I felt very comfortable and connected. There was something about the atmosphere or energy of the retreat: I was struck by how warm people were and how interested they seemed to be in practice. I remember also being surprised by what Rinpoche had to say about alcohol: how it could be used to help one relax and be with other people – rather a contrast to the point of view I was used to in my other Buddhist circles. Perhaps most significantly, when Rinpoche gave his direct introduction, I had an interesting experience. I really felt that I had found my master.

On the last day of the retreat, I joined the queue to meet Rinpoche. I had prepared all sorts of questions – connected to Taoism and my previous Buddhist experience – which were running through my mind. But, by the time I reached the front of the queue, I thought that Rinpoche looked a bit tired and that I really ought not to bother him with these kind of questions. Instead, when it was my turn, I just said hello and thanked him very much for his teaching. Then, I asked him if he liked Chinese food: that was my question! He said, “Yes”, so I told him that I hoped I could cook for him one day. “We’ll see,” he said and shook my hand. That was it.

Two years later, my dream came true. In May 2012, Rinpoche gave teachings on the Song of the Vajra in Hong Kong. I took my mother to the retreat and, one lunchtime, I cooked for Rinpoche in his hotel apartment.

So, that is how I met Rinpoche.