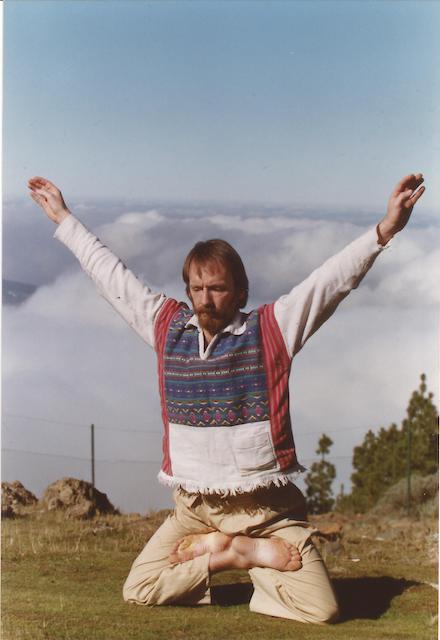 John practising one of the seven lotuses in Gran Canaria.

My story begins with my first involvement in Buddhism near Mansfield, UK, at a small centre where I met with a strange Japanese Zen monk. Later when I moved to London we met again and he wanted to make a record in my small basic studio where he did slow chanting of Om (peace). It was short-lived as later on I understood that his name Maitreya and behavior were strange.

Gradually I was attracted  more to the Tibetan Buddhist tradition. In London, at the time, there wasn’t a lot of choice so, like some of the early people in our Community, we met Chögyam Trungpa and, in particular, quite a few of the early Community members were students of the late Sogyal Rinpoche whose abusive behaviour became very controversial. For some time I had been approaching the Vajrayana, practicing  the ngondro and the gradual approach so I suppose the positive side, if anything, was that Sogyal presented many teachers to us like HH  Dudjom Rinpoche, Dilgo Khyentse Rinpoche and many others. Before a lot of us “jumped ship” and made the transition to Namkhai Norbu Rinpoche, we were at least introduced to quite a spectrum of great teachers from the Nyingmapa tradition.

After being involved at Orgyen Choling, Sogyal’s early center, I went to India for about a year and some months. He had given me a letter to meet the HH Dalai Lama  and Dzogchen Rinpoche,  principally we traveled  to attend a huge gathering in Clement Town at the Mindroling gönpa. It was the Rinchen Terdzö Chenmo or the great treasury of rediscovered teachings, a collection of Termas assembled by Jamgön Kongtrül the Great. Spending time there was quite a high point because I was  exposed to many hundreds of monks nuns, and lamas for a period of about five months or so. We had the wangs and lungs  every day in this very elaborate, artistically rich decorated  Mindroling tradition gönpa and Dilgo Khyentse was giving the wangs every day so it felt like I had been dropped into the deep end, if you like, surrounded by all these monks, nuns and teachers in this kind of environment, which was quite amazing.

It was within this environment that I first heard much more about Dzogchen and in particular about Namkhai Norbu. There were about 15 Westerners attending these wangs every day and in the middle of this there was an English yogi, Stayce Bancroft, who came along. I was familiar with him because many months before that I had seen a lorry in Princess road where Orgyen Choling was located, and it sort of caught my eye. When I enquired I discovered that Stayce had driven the lorry over from a Scandanavian country full of wood burning stoves and later he drove it to India, to Tashi Jong.

In our spare time between the wangs and initiations, Stayce would tell me about some students of Namkhai Norbu that he had met. He’d learned some practices, some Yantra Yoga and Song of the Vajra  and various things, so I was basically getting second or third-hand this increasingly interesting information about Rinpoche and Dzogchen from him. I was in the middle of doing the ngondro after many months of practising, mostly getting distracted from doing it, and so when I heard about this approach, it was different to Tibetan Tantric Buddhism, I became increasingly interested in the characteristics and quality of the teachings coming from Namkhai Norbu. Stayce himself was a charismatic sort of character and later became an important Western yogi living under the radar in Nepal for many many, many years. But anyway, in this period I was learning some Yantra Yoga even before I met Namkhai Norbu, and hearing little bits occasionally from other teachers as well about Dzogchen so I became increasingly fascinated by Dzogchen and in particular  Namkhai Norbu. 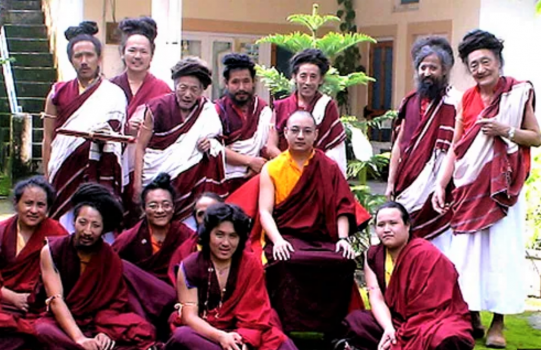 A few weeks after the completion of the Rinchen Terdzö, we travelled around to various Buddhist pilgrimage sites and eventually found ourselves in Nepal. There I met up with Stayce Bancroft and his lorry. He was taking  Khamtrul Rinpoche and about five or six Togdens with their families on pilgrimage. In those days I didn’t fully understand who Khamtrul Rinpoche was or indeed who or what the Togdens were; it was the first time that I had met any Tibetan yogis. Fortunately being a friend of Stayce, I shared the pilgrimage and visited various sites with Khamtrul Rinpoche and the group of Togdens. In the back of the lorry sometimes during breaks they would (what I understand now) practice Kumbhaka and Tsalung.

During my stay in Nepal I went to different monasteries and met a few lamas and had the fortune to meet Chagdud Tulku Rinpoche and receive teachings from him. I went with him to Tattapani when he was invited to do some practices for a dying person. Tattapani is on the Nepalese-Tibetan border, next to a river with hot springs and with my partner Yolanda, we stayed there a few days and he showed us some Padmasambhava caves and we had some strong experiences. When you receive blessings and initiations you receive these coloured cords – I received hundreds of them at the Rinchen Terdzö – and tie them round your neck, in my case, it was around my wrist. It’s like some big “mine’s bigger than yours, I’ve got more than you”, some egoistic, accumulative thing although I didn’t quite realize that at the time. But at Tattapani, Chagdud Tulku teased me and picked at them and asked me, “What are you doing with all these?”, and then he just cut them off. What a relief that was!

Gradually I became more interested in Dzogchen but, in fact, the actual physical meeting with Rinpoche  was after India when we went to Greece to do a retreat in a cave on the island of Crete.

As soon as I got back to London, through the grapevine, I heard that Namkhai Norbu Rinpoche had been there and he was shortly to come back so, of course, by then I felt completely ready! I think that was in April or May of 1979. The retreat was held in what used to be the Cambodian Embassy. At that time Cambodia was at war and the building was empty and, back in those days, many young folks were squatting. If a building was boarded up and unoccupied it was quickly squatted. This one was on “millionaires’ row”, one of the highest-priced property areas in London and had been transformed into the London Guild of Transcultural Studies. The first retreat in London with Namkhai Norbu Rinpoche was organized by Jill Purce and possibly the second one as well. Jill was quite instrumental in getting Rinpoche to the UK and organizing teachings and retreats. So I was at the second retreat in 1979. 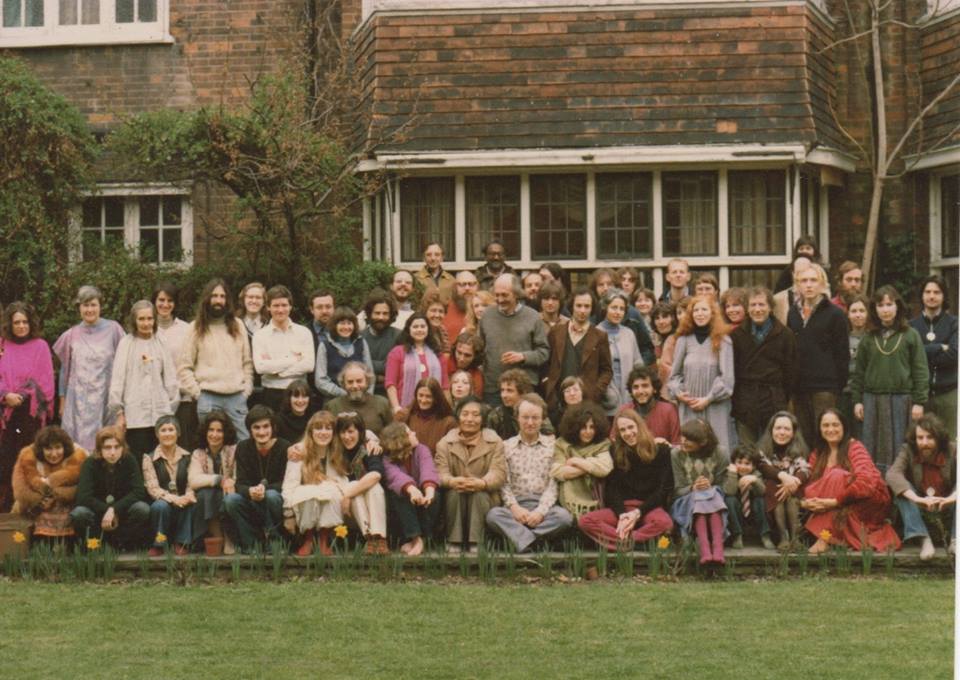 Group photo of Rinpoche’s first retreat in London in 1979 at the former Cambodian Embassy.

I had had a good taste and experience of Tibetan Buddhist Tantra but, of course, when I finally met Rinpoche with his succinct and direct, easy-to-understand transmission in words and knowledge just flowing through, it was like a breath of fresh air, it was completely a “wow” moment. I think I was ready for it. Sometimes we say there’s a kind of time and place for everything, so I’m pleased I went “around the block” a bit and had some basic experience. Maybe it was useful so I could appreciate this more direct approach, Rinpoche’s behavior, his attitude, compared to the more traditional, institutional setting of Buddhism and Tantra. Everything about it was such a profound, coming home, relaxed presence.  Beyond words.

I was  blown away at the first retreat and it was difficult to soak in the real knowledge and meaning of what he was teaching. That came in following retreats, reading and studying and in particular practicing to gain real experience.

One of the things that drew me right before meeting Rinpoche, via Stayce Bancroft, were some of the body, breath, and yogic approaches. I was obviously keen to learn at the first opportunity Yantra Yoga, which I did and, of course, now I’ve been teaching for many years. I started just after a retreat at the Rigpa centre in London, in 1987, where Rinpoche had been invited to teach, and typically during a teaching session he would talk about body, speech and mind and the benefits of breathing and coordinating your prana. Then he pointed at me and said, “You can learn Yantra Yoga from John”. Later a few people came to talk to me and within a week or so we had set up weekly Yantra sessions, and since then I’ve been teaching Yantra Yoga continuously. Of course in those days, there wasn’t any structure or book like we have now. We were learning, practicing and trying to understand but it encouraged me to try my best and make sense of it and teach these keen people, the ones who were at the retreat and wanted to learn this physical movement, breathing system. So I was fortunate that I had these circumstances and motivation. 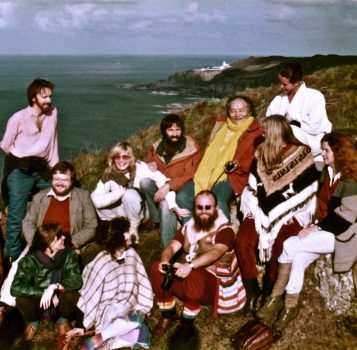 Rinpoche and students during another UK retreat at a holiday park in Ilfracombe.

A few retreats later, in England, when Namkhai Norbu came back, there was a retreat in Devon, possibly around 1984. We basically took over a large holiday center and had the teachings in what was the pub or the bar section. There were lots of horns and trumpets and things on the walls. In the middle of the teaching Rinpoche mentioned this huge collection of termas and the Rinchen Terdzö. Afterwards talking with Rinpoche Mike Farmer and myself mentioned that we had received them in India a few years earlier and Rinpoche said something like, “How fortunate you are. I didn’t receive them, maybe you can give them to me” or words to that effect.

In some of the early days, at the end of a retreat Rinpoche would create a situation in which people could open up and do strange things and it would create a situation where we could play and explore beyond normal constraints.  We used to have a lot of shenanigans, fun and games, song and dance and so forth during the early retreats.  So at the end of this retreat I came dressed up as a “Lama Jigajig” and Mike was my assistant. I had some kind of robes and a skeleton mask with balloon eyes, and water pistols, bells etc and…yeah, horrendous. Mike ushered the people in for blessings and fortunately, Rinpoche was egging us on, playing the Tibetan cymbals, laughing his head off, and it became a whole cathartic process. The horns came off the wall of the pub folks trying to play them, Rinpoche was playing the cymbals, I was squirting people with water, and my eyes were popping out of my skull head, bonking people with a crystal and I went into a kind of trance. For a moment I was lost in time. Then I fell off (I was on a  table) and I kind of woke up. It was quite a profound experience for me and very funny for everyone else. Everybody was in hysterics, somehow it seemed sacrilegious as well, but we were constantly reassured by Rinpoche laughing his head off. So that was quite a strong experience for me and, of course, entertaining. The anchored presence of Rinpoche supporting the open play of pantomime.