“Who is the Chinese man in the photo with your son?” I asked Marc.
“He is my Master”, he replied.
“Master of what?”, I insisted.
“Master of life,” he answered me smiling and without going into more detail.

That was the first image I saw of Rinpoche, the photo was on the table behind my drum set. We used to play music at the Eagleton’s house in Altea, Alicante, Spain. 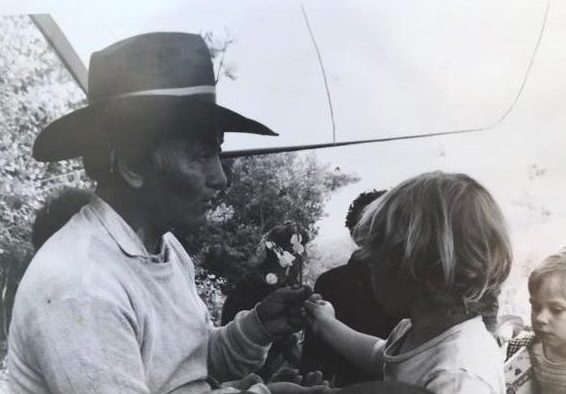 The first image seen of Rinpoche

I was born in Alicante but I grew up in Madrid. At seventeen I became a musician, a drummer, and at nineteen I got married. 1975 was a year of great changes, Spain was effervescent and in search of freedom and answers. In 1976 my wife and I (with our two children) left Madrid and settled in Altea, a beautiful Mediterranean town; we believed it was a better place to see them grow up. I have always thought that the life change was a success.

In Altea we get together a good number of artists, painters, sculptors, philosophers, musicians, actors, dancers, intellectuals and hippies in general, with the common goal of wanting to change the world by transgressing the limits of conventional society. Nice dream.

One morning Richard Eagleton came to our house. He told me that he was a musician like his brother Marc and that a mutual friend had recommended that they connect with me. Thus began a relationship in which music was the guiding thread of the purest fusion of harmony and energy, we could be playing for hours improvising, creating and developing the songs from the heart and to infinity, it was something really fantastic, pure, very different from what I lived in my professional life, music beyond concepts.

From time to time they went on a trip to some exotic place, like Lapland. Next week we are going to a retreat, they said, to a place where the sun does not set at this time of summer, it is always daytime. For my Catholic education a retreat was something like recollection, silence, praying, making fasts, sacrifices and so on, but they told me that in their retreats there were many people from all over the world, “There are many girls!” 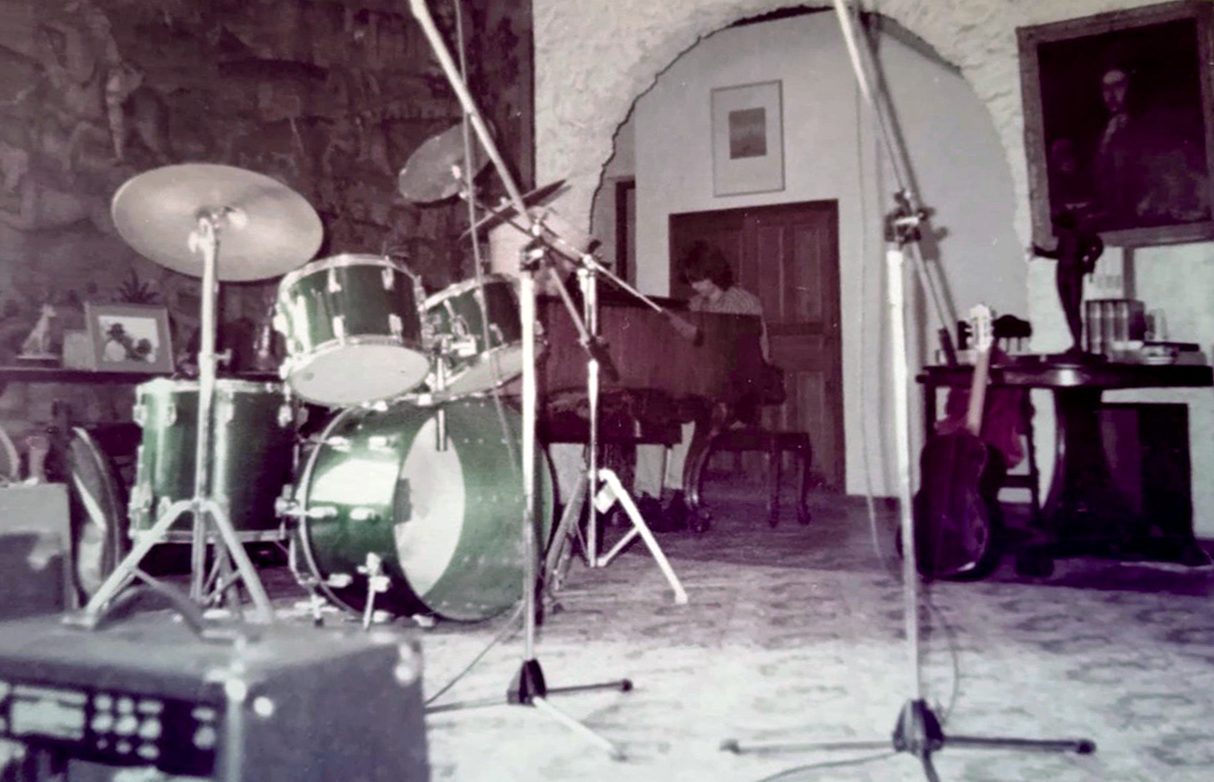 The photo was on the table behind my drum set.

All this sounded like Chinese to me but I respected them because they manifested themselves in an impeccable, exquisite way.

In my “search for truth” I had gone through Bakunin, Hess, Castaneda and… Gurdjieff my favorite, and my closest approach to Buddhism was Lobsang Rampa, that is, I am not very intellectual.

A few years later, my Eagleton brothers went to live in Seggiano, in the Italian Tuscany. Our musical relationship became lethargic, limiting itself to the occasions when they came to Altea on vacation and always with the commitment to return the visit myself to attend to their repeated invitations.

Finally in 1990 I was able to organize a trip that I scheduled for May.

“If you can, it would be interesting if you came on May 1 because there is going to be a special event”, Richard told me.

“We are going to have a visit from the Dalai Lama.”

On May 1, 1990 I arrived in Merigar for the first time, the expectation was unheard of, I think I remember that His Holiness arrived by helicopter, there were many Buddhist monks, military or Carabinieri, many people, the Gönpa (which was going to be inaugurated) was at overflowing, there was a large screen outside with many chairs so that those who did not fit inside could follow the activities. We got a place inside the Gönpa and I could see His Holiness’s arrival up close. Everything was very exciting, interesting, but what struck me the most was when Rinpoche entered and everyone stood up and there was that silence, a show of respect and devotion. That impression that I had when I saw Rinpoche for the first time is something that has remained inside me indelibly, not in my memory but in my whole being, body, voice and mind. 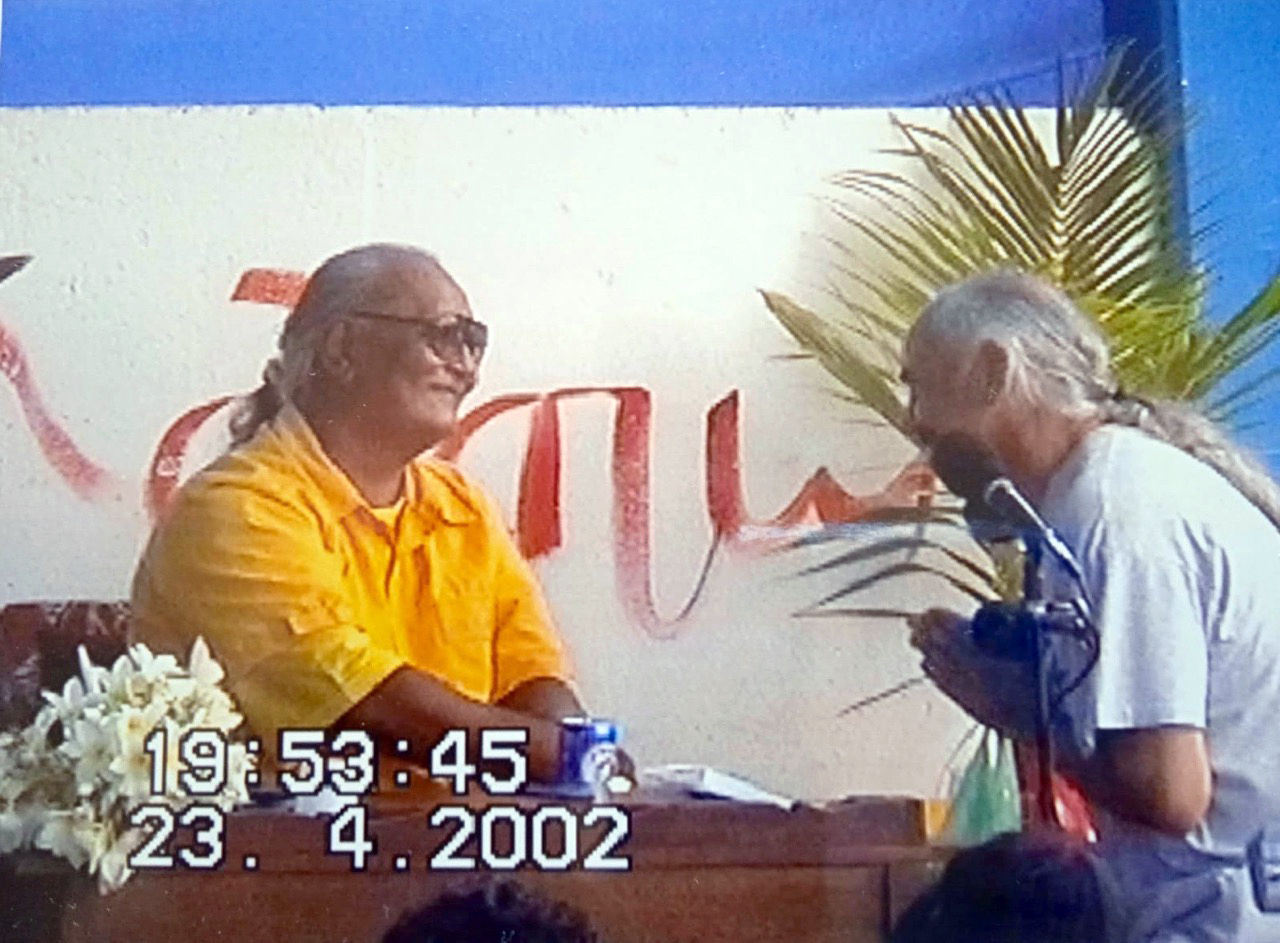 I requested and received permission directly from Rinpoche to attend the first Longsal Retreat in Tashigar North.

The next day there was a kind of picnic (it really was a Ganapuja but I didn’t know it) and I had the opportunity to share a few hours with the Master and the Sangha, we ate, drank and, of course, we sang.

In September I returned to Merigar to attend my first retreat. I traveled from Rome with Paolo Brunatto and his wife Pupe. Paolo spoke Spanish and since he liked to do it, he offered to translate for me from Rinpoche, who then taught in Italian and was translated into English. After ten minutes I said to Paolo, “Thank you but you don’t need to make an effort because I understand His words quite well, if I don’t understand something I’ll ask you.” The Tibetan words, such as Dharmakaya, etc., had me confused but the Italian ones I understood from the first moment as well as the essence of their deep meaning and I immediately perceived how the knowledge was transmitted to each of us as the mother bird feeds her chicks by giving them the food they can digest.

There was Teaching in the morning and in the afternoon. In those days Rinpoche began to teach The Dance of the Vajra and sometimes, after the afternoon session, we went to Cappanone where I had the opportunity to take my first steps in the Mandala. Today Vajra Dance is my main practice. 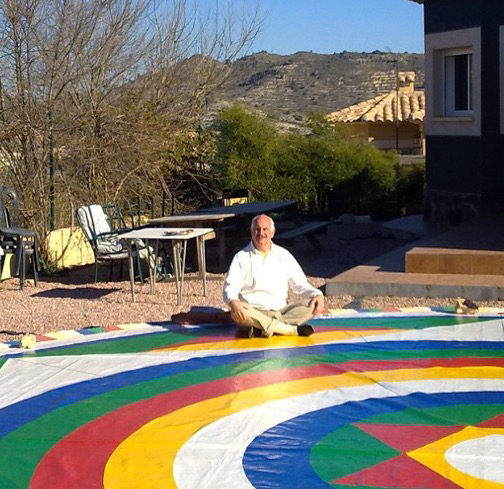 How fortunate we are that we have had the possibility to drink the pure water of knowledge directly from the Source of Wisdom!!!

Thank you my Dear Master.