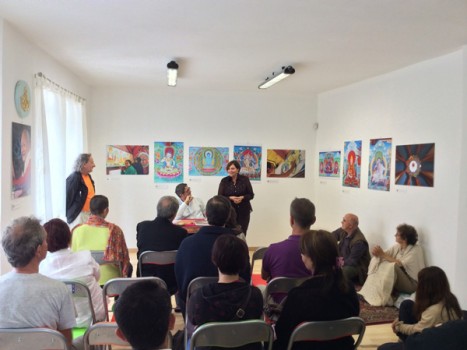 On Saturday September 20, 2014, Tobdenling, the new Ling situated in Turin in the north of Italy, was officially inaugurated over the weekend of September 20-21, 2014. Located in a pleasant brick house built in the 1920s, the Ling is spacious and bright with greenery all around and can be easily reached from all parts of Turin, just 10 minutes walk from the Metro station.

The building has been completed renovated. Off the hall of the ground floor on the right there is a small gonpa with a traditional raised brick ceiling that has been elegantly painted and decorated by Giuliana Bordignon. There is also a living room, kitchen and bathroom. The first floor, which boasts a beautiful parquet floor throughout, has a large meditation/conference room and two rooms for guests as well as a new bathroom.

The day before the official inauguration, September 20, Fabio Risolo gave a short introductory seminar to the Dzogchen teaching and led a session of meditation. It seemed appropriate to communicate something concrete about what we were about to inaugurate. Fabio introduced the three paths and made us reflect on the behavior of practitioners and how we serve as a mirror, leading us in a few minutes of meditation that was useful for both for new people and long standing practitioners.

September 21, the date suggested by Chögyal Namkhai Norbu for the inauguration began at 8.30 am with the Serkyem practice led by Aldo Oneto and continued with Fabio Risolo’s presentation of the Dzogchen Community and the Dzogchen teachings to the various people who came – some completely new, others not seen for some time, and others who had met our precious Master in the past, perhaps at a retreat or a conference. He summed up the sense of why we follow this Path, of the Dzogchen Community, of the Gars and Lings, the places where one can have the opportunity to come together even in a situation that is so dispersive such as the city! 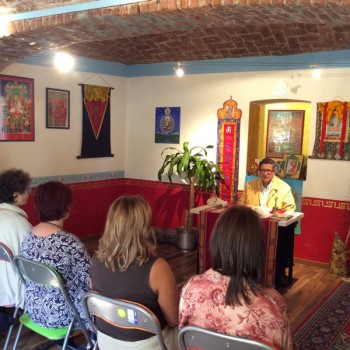 The day passed merrily, lunch consisting of a hearty and delicious buffet provided by Tobdenling and prepared with generosity and dedication by the practitioners of Turin, who collaborated with enthusiasm and initiative. In the afternoon we danced some Tibetan dances led by Jessica Monaci. The evening ended with a demonstration of yantra yoga given by Chiara D’Angelo in the presence of several new people who attended and even tried out the first two lunsan.

The Ling has been opened, now we have to go on continuing to confirm its meaning.