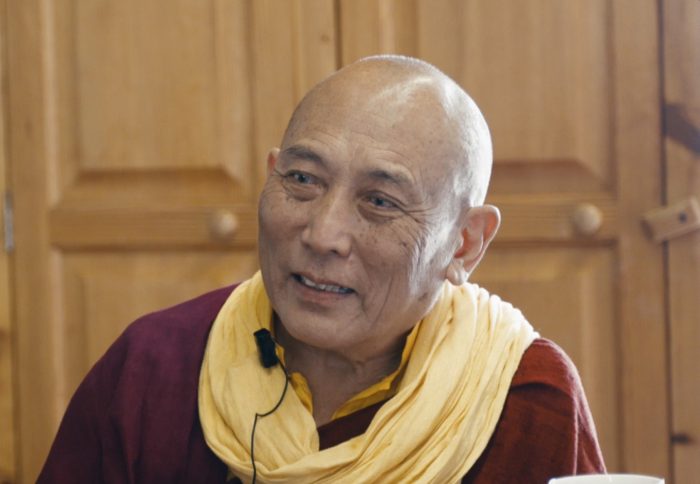 Drugu Choegyal Rinpoche, a Drukpa Kagyu master and well-known artist who depicted the Twelve Primordial Masters in the Merigar Gönpa, was in Italy in autumn 2019 for the opening of an exhibition of his work in Rome. Because of his close connection with Chögyal Namkhai Norbu he attended events at Merigar to mark a year since the passing of the Master. He kindly offered to do this interview with The Mirror during his visit.

The Mirror: We want to say welcome back to Merigar. How does it feel to be back?

Drugu Choegyal Rinpoche: Of course I miss Norbu Rinpoche but there are reasons not to be so sad. This sanghahas gathered together to do practice and I really feel that the teaching is alive in the Community of Merigar. When Buddha passed away His teaching remained alive within His disciples. In the same way when a teacher passes away, his physical life is gone but his lineage, his teaching do not disappear with the teacher but remain the same and continue to be alive.

M: Can you tell us about your past visits to Merigar?

DCR: I first came to Merigar in 1986 when Norbu Rinpoche invited Dorzong Rinpoche before the Gönpa was built. We visited twice I think. Dorzong Rinpoche gave Mahamudra teachings and I gave a talk. The second time I was invited – the Gönpa was not yet ready – I gave a teaching of a Yeshe Tsogyal practice. I came again because Rinpoche wanted me to paint the panel of the Twelve Primordial Masters. I discussed the plans with him and he invited me, Tsering Wangchug the master artist and his wife and fellow artist. I came a few times after that to complete the painting of the Twelve Masters. 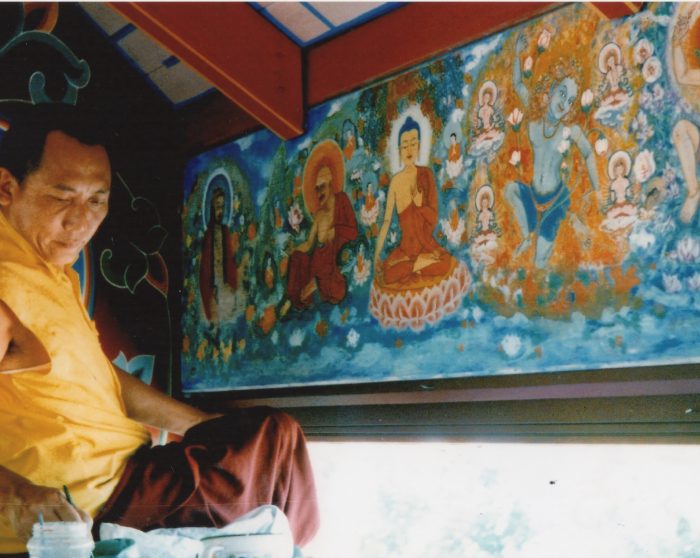 M: The figures of the Primordial Masters that you painted in the Merigar Gönpa are in a unique original style. Were you inspired to paint them in this way when you came to Merigar?

DCR: When I started to paint the figures, I contemplated the Dzogchen Masters, visualizing them in accordance with the texts. I drew some sketches and showed them to Namkhai Norbu Rinpoche who liked them. He wanted me, rather than do something that completely conformed to tradition, to paint the way I felt. These figures are not really done in a traditional way, yet they are not untraditional. They are based on the essence of the quality of each individual master, and the feeling and meaning I sensed visualizing them.

M: Where were you born?
DCR: I was born in Chakzam Kha of Ngomchu River in Nangchen. My monastery is near Chamdo in a place called Drugu. It is a small independent monastery in quite a large area inhabited by six nomadic tribes. We all live together as one community.

M: How old were you when you had to leave Tibet?
DCR: I left Tibet for India in 1958 just after H.E. the VIIIth Khamtrul Rinpoche did so. I reached India in 1959 after H.H. the Dalai Lama crossed Tawang Arunachal. I was supposed to leave Tibet with Khamtrul Rinpoche and Dorzong Rinpoche. They reached India in 1958 before the upheaval in Lhasa. Because Khamtrul Rinpoche knew what was about to happen in Tibet, he left earlier in order to reach India safely. Rinpoche had wanted to take Adeu Rinpoche and me with him. However, Adeu Rinpoche was unable to depart because he was the teacher of the king of Nangchen and the king and the royal family could not leave.

We left many months later. From childhood I had great faith, trust, and devotion in Khamtrul Rinpoche, the Triple Gem, and my Tsawa’i Lamas. Thus, though we had some difficulties on the way, we prayed to Khamtrul Rinpoche and the Triple Gem and all went well. When we reached India, Khamtrul Rinpoche took care of Dorzong Rinpoche and me and gave us teachings. We were surrounded by all the great togdens and I did not feel so lost. I saw that in this enlightened company nobody was angry at the Chinese, nobody was upset about the sad situation, everyone was happy and peaceful. That was really amazing.

M: Did you paint as a child?
DCR: At my family home when I was small we had a beautiful shrine room with statues and wall paintings that I really liked. I remember them well. So even at an early age I had a great interest in art. My monastery was endowed with many thangkas, statues and books with paintings. I was always very inquisitive and wanting to browse through these books. When studying at the monastery although I was alone I did not feel lonely because I was surrounded by all these things and had an enormous interest in art. 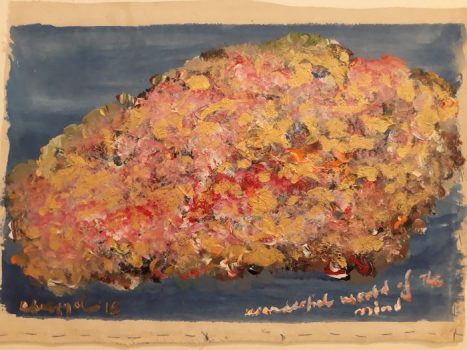 M: As a tulku, did your tutors at the monastery encourage you to paint?
DCR: My monastery training was almost fulltime study, mainly reading, writing, and other subjects. I had a few different tutors: some were very kind and compassionate, sometimes letting me have a break to do things like clay sculptures and painting, but these activities were exceptions. The big collection of thangkas of my monastery influenced me strongly.

M: Thank you very much, Rinpoche.

Drugu Choegyal’s exhibition of paintings can be seen at the Galleria Alessandra Bonomo in Rome until the end of January 2020.