The Mirror: How did you approach studying Santi Maha Sangha and was your academic background helpful in your studies?

Elías Capriles: For taking the ordinary Base exam I studied quite intensively, perhaps for four years, and learned all the enumerations by heart, even though what I really care for is the essence of the teachings—their true meaning and its realization. And in fact, whereas my understanding of the teachings of the SMS seems to grow ever deeper as time passes, even though I teach SMS quite often, nowadays I don’t remember all the enumerations by heart. 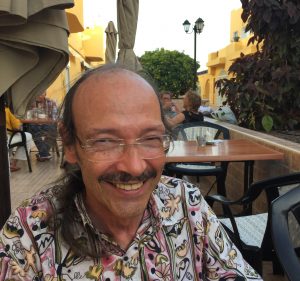 As to my academic background, it probably helped, but that wasn’t the main factor. I was in India and Nepal from 1973 through 1983. In Nepal a Dzogchen master and university professor invited me to study with him at an Indian university. However, roughly at the same time I received Dzogchen tregchod and some specific Anuyoga teachings from Thinley Norbu Rinpoche, and hence I declined the professor’s invitation and decided to go into retreat on the mountains and devote myself to practice. Then I went to Dudjom Rinpoche for blessings before setting off to the mountains, and he told me I had to come the following day—and that day gave me very detailed and specific instructions for my retreat. Definitely what I experienced in that retreat and in subsequent ones was far more helpful for understanding and getting the essence of SMS than whatever I could have learned at the university and than whatever academic background I may have had.

Then in 1978 I met Chögyal Namkhai Norbu, who was giving teachings in Boudhanath, and connected so deeply with the master that I immediately wrote a poem about him. Since, moreover, I found his way of teaching to correspond to our time, later on I invited him to Venezuela and began studying with him. Then I became a SMS teacher.

The Mirror: Did you spend a long time in retreat?

Elías Capriles: I never did 9 years, 9 months and 9 days, or 7, 7, 7 or even 3, 3, 3, because that was not the kind of retreat I was interested in doing—and, on the other hand, the visa the Nepalese authorities gave me each time I entered the country lasted for three months only. So I would stay on the mountains for 3 months, come down to Kathmandu, go to India, come back, and go up the mountain again. Thus I did quite a few three-months retreats but I never did a longer one. I concentrated on tregchod, though I was doing two Anuyoga practices, one of them involving ritual.

The Mirror: They will soon be holding the SMS exam at Dzamling Gar. Do you have any advice for students studying for the exam?

Elías: Even though the enumerations are essential to pass the exam, I think that for one’s spiritual evolution it is far more important to grasp the real meaning of whatever one is studying. And to that aim, I think there are two keys. (1) The first is to distinguish the principles of the different teachings in The Precious Vase so that one is not puzzled by seeming contradictions, (a) among teachings that pertain to different Sutric vehicles, teachings that pertain to different Tantric vehicles, and teachings that pertain to the different series of Dzogchen, (b) among outer, inner and secret meanings, and (c) between provisional and definitive meanings. (2) The second is to intensively apply the practices that are part of the SMS Base training—and in particular the semdzin, the rushan, and the three varieties of the 7th lojong. Even though you will not obtain realization by intensively doing these three sets of practices, you may have determinant experiences. On the basis of those experiences you may have at least some glimpses of rigpa, taste the single flavor of rigpa, and begin to distinguish between rigpa and the variety of mere experiences, realizing how they are normally mixed. And after that, you may learn to use experiences as fuel to maintain the state of rigpa. I think practice is the key to grasping the true meaning of all that has to do with the whole of SMS.

The Mirror: I’d like to ask you about your recent publication, The Ornament of the Thought of Nagarjuna. In what way is this book useful for Dzogchen practitioners?

Elías: I think that depends on the kind of mentality the person has. There are two ways in which it is easy to get full realization with Dzogchen. (1) One is by being quite simple-minded, guileless and not too clever: by applying pith instructions, without having to study a lot, one may get realized. Since one doesn’t have a complicated intellect, one doesn’t have many doubts to clear and thus can have heartfelt trust and faith. (2) The other way is that one has a very complicated intellect, but one exhausts it: one studies the teachings thoroughly, testing them with a highly critical attitude (the Buddha himself said his teachings were like gold, and should be tested in the three ways in which gold is tested in order to determine whether they were true and effective, or false and useless), and then with correct reasoning refutes and counteracts all of one’s wrong assumptions before one sets out to practice. It is only for such complicated-minded people that the book in question may be useful.

The book is on Prasangika Madhyamaka philosophy, which according to the current version of the Dra Thalgyur Tantra is the viewpoint of Dzogchen. Of course in reality Dzogchen is not Prasangika-Madhyamaka, for Prasangika-Madhyamaka is Sutra, not Dzogchen and not even Tantra. Therefore, we cannot say Prasangika is the same as Dzogchen. But if we account for the differences in approaches, realizations and so on, it is one of the systems that fit Dzogchen the best among Sutra systems.

The teachers of the Rime movement—except for Mipham Rinpoche, who adhered to Prasangika—asserted Mahamadhyamaka to be the Madhyamaka system nearest to Dzogchen. Prasangika does not teach the emptiness of other-existence taught by Mahamadhyamaka, but the ways in which both schools explain the emptiness of self-existence of all entities are the same as that of Dzogchen. Therefore, in my view both systems are compatible with Dzogchen—which, it must be noted, uses a lot of Third Dharmachakra terminology.

In all vehicles other than Dzogchen, and in agreement with one of the senses of the Tibetan term, tawa refers to an intellectual point of view. However, in the Dzogchen teachings tawa is understood in another of the acceptations of the term, which is not that of an intellectual point of view, but that of seeing. In fact, in a Dzogchen context I render that term as Vision, because the tawa of Dzogchen is the direct Vision of the true condition of reality, utterly beyond the intellect. This is so because it is evident to all Dzogchen masters that words and concepts can never fit reality and that, therefore, whatever one can understand or say about reality is simply wrong. To begin with, the true condition of reality is continuous—it is a continuum that as such does not involve divisions, discontinuities, differences or separations—whereas thoughts are discontinuous: they establish differences and (as evinced by Dignaga’s doctrines of apoha and anyapoha) are defined by exclusion of something else. Thoughts, which are discontinuous and always exclude something, cannot fit that which is continuous and does not exclude anything. In fact, thoughts establish limits, represented as corners or angles, whereas the true condition of reality is represented as a total thigle or sphere, which has no angles or corners. Only when thought collapses can the true condition of reality appear in your mental stream. That true condition is compared with the sun, and our samsara is compared to the sun being covered by clouds. The thoughts are the clouds. How can anyone grasp the sun in terms of the clouds that conceal it? It’s absolutely impossible.

Genuine Prasangika agrees that thoughts are like clouds that cover the sun and that only when they are dispelled can the sun be realized. However, Prasangika is intellectual in that it uses reasoning exhaustively in order to bring the reasoning mind to the point at which it is blocked and thus is made to collapse. Dzogchen does not necessarily do that. In Dzogchen you get a direct pointing to the true condition, a direct introduction, as indicated by Garab Dorje’s mudra, which is pointing right behind one’s eyes. It’s an instruction on how to look at the mind so that our dualistic subject-object perceptual structure short-circuits and collapses, and by the same token the true condition, which is the nondual essence or nature of mind that our dualistic mind conceals, may manifest—which is like the clouds dispersing and the shining sun being seen as it is.

Thus the approach of Prasangika and that of Dzogchen are clearly not the same, and certainly Prasangika cannot take us to the heights of realization that may be reached by means of Dzogchen, yet both have their respective means to make the dualistic mind and the intellect collapse. And this is why that book can be helpful to a Dzogchen practitioner who has a complicated mentality, who is highly intellectual.

The Mirror: You have written a lot. Is that your latest book? Are you working on a new publication at the moment?

Elías: I’ve published over fifteen books. At the end of 2013 I published a book in four volumes called The Beyond Mind Papers: Transpersonal and Metatranspersonal Theory (A Dzogchen Approach), which has had quite a big impact on transpersonal psychology.

Then in December 2016 I finished a book in Spanish called Shamanism and Dzogchen that is now in press with Ediciones La Llave. I wrote it because many people are practicing both systems and fail to see that those two are absolutely different and mutually contradictory. For example, in South American shamanism, the point is to have access to a reality of elementals, spirits and demons that ordinary people can’t see. According to that system, the reality to which those beings pertain is the true reality, whereas the ordinary everyday reality is false. In Dzogchen the point is to realize that both the reality of elementals, spirits and demons and everyday reality—and indeed all realities—are false, and to become free from the hold of them all. For example, in the practice of chöd, which combines the principle of Dzogchen with those of other vehicles, you come in contact with spirits, demons and elemental beings, but you do so in order to have an experience of extreme dread and then apply a Dzogchen instruction that will allow both those beings and your dualistic, dreadful mind to instantly dissolve, making you free from their power and from your belief in them. And since you become free from the power of your mind, by the same token you become free from your belief in ordinary reality and from the power that this reality has over you.

Now I am giving the last touches to Volume I of Buddhism and Dzogchen and about to begin writing Vol. II of the same book. They’re part of a big book in various volumes, but a provisional version of the first volume is already available in my Webpage, where it can be freely downloaded (to access it directly go to http://webdelprofesor.ula.ve/humanidades/elicap/en/uploads/Biblioteca/bdz-e.version.pdf; though sometimes the URL doesn’t respond, if this happens, on trying later on it usually opens). After those last touches I’ll send that first volume to the publishers.

The Mirror: Thank you very much for your time.