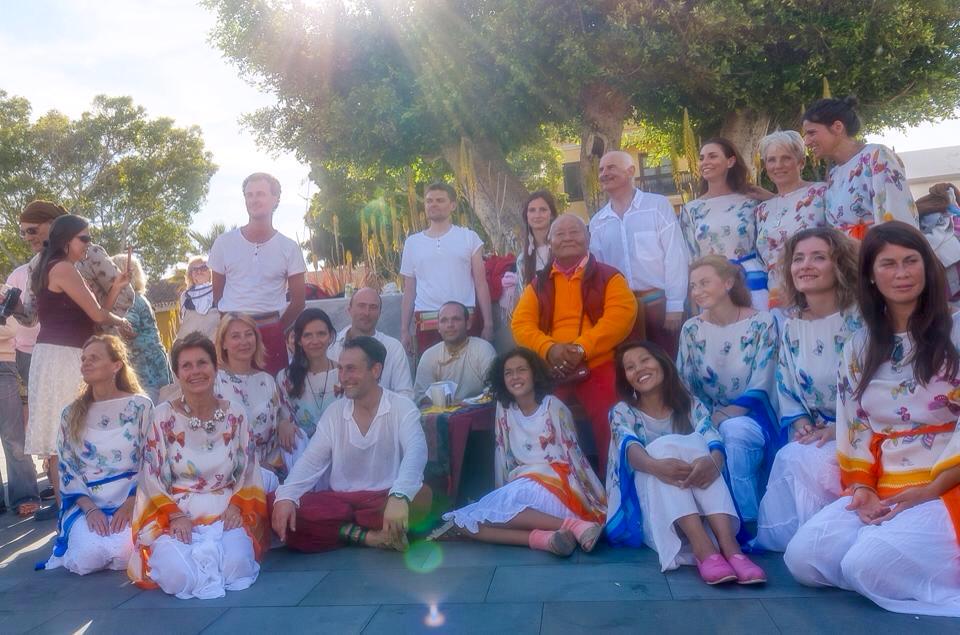 After the Khaita show in Adeje, Tenerife, 2014.

Tonight I will talk a little bit about the Khaita project that Chögyal Namkhai Norbu started in the north of Tenerife at the end of 2011 and to which he dedicated most of his time until 2018 when he left this dimension.

What does Khaita mean? Kha means ‘sky’ or ‘space’, and khai is genitive, so ‘of the sky’ or ‘of the space’. Ta means ‘harmony’ or ‘melody’. So this short word beautifully expresses the sense and the goal of Khaita that is discovering harmony through melody. ‘Space’ gives an idea of openness, something without limitation, without beginning or end. We usually translate Khaita as “Harmony in the Space” This harmony, we discover through songs and dances.

The logo that Rinpoche chose for Khaita is an infinite knot, golden and shining, on the planet Earth. This symbol is also one of the eight auspicious symbols and represents the continuation of love, compassion and energy. Continuation in this case means “without corners”, because we say that everything is round, so without obstacles, without limitations. And it’s on the planet Earth, which is the dimension where we live at this moment.

And, particularly, we call these dances joyful. Rinpoche chose this word, so it’s ‘joyful dances’. In this case ‘joyful’ means something stable, a state that we discover inside of us that is not connected with positive or negative circumstances. Once we discover it, it doesn’t change.

What does the Khaita project consist of? Chögyal Namkhai Norbu dedicated most of his time to it from the end of 2011 till 2018. First, he searched for songs and discovered some interesting songs by young Tibetan artists on Internet. He chose around 400 songs according to the melody and the lyrics out of the thousands that he watched and listened to. The lyrics of the songs that he chose talk about values that are important not only for Tibetan culture but for all cultures, and for each of us as human beings. For example, love for our own fatherland, the importance of respecting the environment and maintaining our own culture and language, respect for our ancestors and parents, the importance of spreading peace in the world, and also overcoming limitations and borders between groups and countries as well as the limitations of our own judgment. The third criteria according to which Rinpoche chose the songs were the singers. He chose singers who dedicated themselves to supporting their country.

This was the first step. Then Rinpoche transcribed the Tibetan texts of all the songs from the videos one by one. And he not only transcribed, he also corrected some points and slightly changed some words. And the way he wrote was very elegant. Now we have more than 400 texts that are very beautiful to see. He put ornaments like flowers at the beginning or to separate the parts of the songs. He also created a system of small ornaments, like a small wave, to help us to understand the melody of each song. For instance, if there was a phrase ending with O-o-oh, he counted precisely how many o’s to put. You can imagine how much time he dedicated to this.

And then not only in Tibetan – because only a few of us can read and sing in Tibetan – but he transliterated all these songs into the Drajor phonetic system. He did exactly the same thing with a small wave and ornaments but in Drajor. So from that moment we could also start to sing with him.

In general Rinpoche would wake up every morning very early at 4 o’clock. Then he would put on the music, write down the songs and, at breakfast, he would come with 2 or 3 new songs that he would translate for us orally, and we would record the translation and transcribe everything.

At that time, after presenting these few songs, we would continue singing together for the rest of the day, from the afternoon till late in the evening singing and dancing together. So these days, weeks, and months were filled with melody and sound.

Rinpoche always liked to sing very much. Especially at the beginning, we used to sing the same song 10, 20, and even more times, especially when the melody was not easy to understand. We would repeat it again and again, but Rinpoche always sang with the same freshness as if he was singing for the first time, never bored but as if it was really a new experience, learning something more. 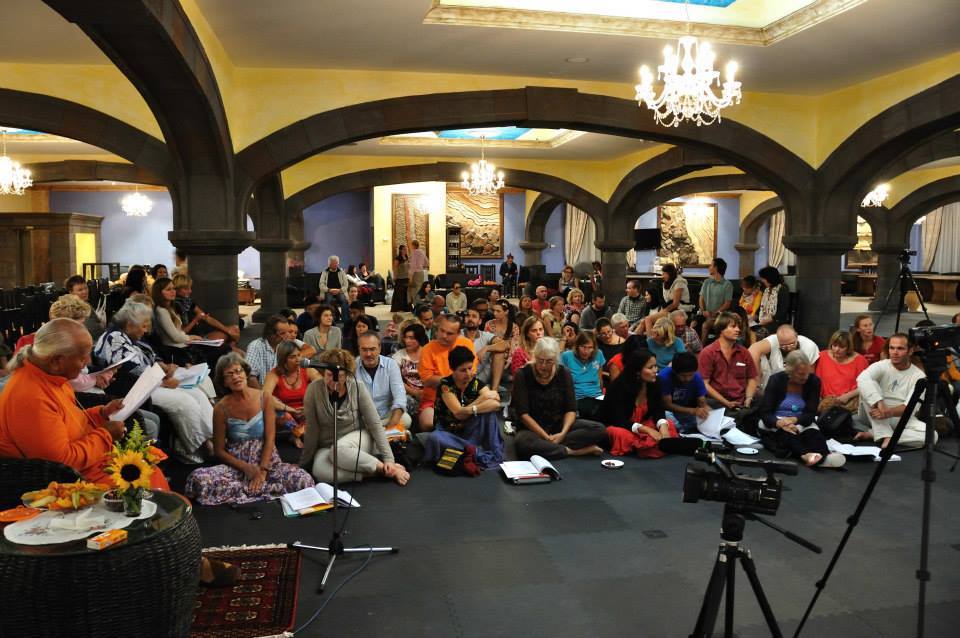 Singing Khaita songs with Rinpoche at the Hotel Callao, Tenerife, 2013.

At the very beginning we would sing the whole day and later we started to have an appointment at 5 o’clock. Rinpoche would say, “At 5 o’clock in every place we sing and dance together.” If there was a retreat a 5 o’clock session was part of the program. If it was between retreats we would sing and dance in the Gönpa at Merigar, Dzamling Gar or other Gars. Or, when Rinpoche was travelling, if there was no common place where we could come together, he would invite everybody interested in singing and dancing to his private house. He would open the door and whoever wanted to come could come.

We have three collections of songs now. The first one that was published is called Message from Tibet and has 108 songs. This book has texts in Tibetan, Drajor, and their translation in English.

Then there is Comments on Message from Tibet, a collection of Rinpoche’s commentaries on these songs. This is very interesting because there you can see different levels of understanding of each song. Many of the songs have a hidden or more profound meaning and often Rinpoche gave a profound explanation connected to Dzogchen Teaching.

The second collection is called Barsam, which means ‘Bridge in Between’, and now contains 70 songs. The third one, Mekhor, has 180 songs. The name Mekhor and the subdivision of these 180 songs follow the principles of Tibetan astrology of the elements.

Rinpoche really liked music, singing, and playing the flute and harmonica and, in fact, he had a big collection of flutes. Until the last months of his life he used to enjoy singing those Khaita songs that he chose. So, the music, the melody, and the dances of the Khaita songs really permeated these last years of Rinpoche’s life and also our lives.

Today we have 230 dances with a big variety: some simple, others more complex, different types of choreography, and so on. Each dance has been approved by Rinpoche. He would carefully watch us dancing the first time, often correcting or changing some movement, and then the dance would be ready to be presented to the public.

At the beginning Rinpoche also liked to participate in the creation of the dance and all the first dances we did collaborating with him, finding together some movements, some steps. The principle of the choreography was to translate the lyrics into movement.

For example, in some songs they speak about the ten virtuous actions and we were wondering how we could represent them. One day, someone presented Rinpoche with a book with sign language for deaf people and he looked there for something interesting. ‘Ten’ in this sign language is like this [a gesture with two hands up], and virtue, like something positive, is this [a gesture with two hands up joining the thumb and index fingers]. Now when we have this phrase ‘ten virtuous actions’, we do it like this [the two gestures combined]. It’s an example that we can find inspiration in everything.

The Khaita project united two aspects that mostly characterized Rinpoche’s life. One is that Rinpoche was a great erudite in the knowledge of different fields of Tibetan culture. The other is that he had infinite wisdom and knowledge as a Dzogchen master. The songs and the artists are Tibetan, the language is Tibetan, so there is this aspect of supporting Tibetan culture.

Rinpoche said many times, “I am doing this not because I am Tibetan, not because I want to support my own culture, but because the Tibetan language is the key to access the most ancient Buddhist or Dzogchen texts. If we lose the language, then we lose this direct access.” And the other aspect, as Rinpoche was a Dzogchen master, the use of worldly music and worldly dance as a contemplative method, is really original, innovative. It’s a way to relax through presence and awareness.

In this way Rinpoche surpassed all our expectations, our ideas of what spiritual practice, a spiritual master or spiritual path should be because instead of sacred sound and dance we were using worldly sound and dance. As a great Dzogchen master he showed us first how to become aware of our limitations and then to find a way to overcome them, because there were many questions such as, “Why do we have to do this?”, “Why is Rinpoche dedicating so much time to this instead of writing sacred texts?” or “I’m not able to move” or “I don’t like the music.”

Khaita is the last or one of the last great gifts that Rinpoche left us. For me it was really the last teaching that I received. It brings an important message to us that we can apply in daily life: how to really relax with joy and also how to collaborate. When we dance we work with our three existences: we move with our body, and when we try to make harmonious movements it means we also work with our energy and our mind. And we train in presence and awareness. These three aspects are very connected.

Rinpoche also gave an important message for the future of the Community because he showed us how to collaborate in a relaxed way. When we dance we need to be aware and respect each other’s space.

There are three principles that Rinpoche repeated when we danced. First, the movements should be harmonious. The dance should be correct so we have to learn how to do the movements. And the third – we should be aware of space and others. If we are doing a circle dance we should keep the circle, respecting each other’s space and collaborating. I am aware of the person before and after me and of the whole space, but each dancer should be aware, otherwise the circle shape is not maintained. So for me it’s also a key point for the future.

In my understanding, Khaita is a mandala of the Dzogchen Community. At my last Mandarava retreat with Rinpoche in 2017 in Dzamling Gar a hundred of us were dancing in many concentric circles. Even though there were people dancing for the first time, there was a really big harmony in all of us and in moving together. I felt that this was the mandala of the Dzogchen Community and Rinpoche is our center.

Where to find material regarding Khaita Joyful Dances:

– Youtube Channel with Rinpoche’s talks about Khaita, all original videos, videos of dances and performances