By Charles Manson
Shambhala Lives of the Masters series
Shambhala 2022 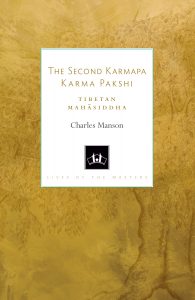 Tibetan spiritual biographies traditionally tend towards hagiography, focusing exclusively on spiritual achievements, keeping ordinary human life at a distance, as if the human side would degrade the saintly. Often lists of empowerments and attainments make them like reference books. There are exceptions like Tulku Urgyen Rinpoche’s Blazing Splendour, in which stories are shared from a living master directly to students.

The main sources for Manson’s book derive from Karma Pakshi’s autobiographical memoirs, which makes the weave of narration and spiritual accomplishments smoother. Although Pakshi’s memoirs are sparse on the details of his birth and parentage, Manson’s meticulous research succeeds in structuring a reader-friendly approach to the existing complexities of the historical, political, superhuman and human events of Karma Pakshi’s life.

The 13th century was a tumultuous time in central Asia with the Muslim invasion of Northern India, and the massacres by Genghis Khan’s troops thundering across northern Inner Asia. Genghis’ grandsons, Mongke and Kubilai, were also marauding warriors, with Kubilai being the most volatile. To be aligned as a guru to the Mongol Emperors, as Karma Pakshi’s story reveals, was exceptionally dangerous. As a mahasiddha, he was up for the job; and that makes it a truly dramatic life-story.

Karma Pakshi was born into a Buddhist family whose ancestry during Padmasambhava’s era included a mantra master who was said to ride on light rays in the sky. A child prodigy, at the age of six Karma Pakshi could read without being taught and assimilated Buddhist teaching immediately. As a teenager, his meditation was so advanced he described his mind to be like ‘’an unruffled, deep ocean.’’ His teacher Pomdrakpa had signs indicating his young student was a reincarnation of a renowned saint, Dusum Khyenpa. Although Dusum Khyenpa is now referred to retrospectively as the first Karmapa, it was Karma Pakshi who first was called Karmapa. Eventually recognition of a reincarnate child became the norm for finding tulkus, adopted by most schools of Tibetan Buddhism including that of the Dalai Lama some 400 years later.

The initial transmissions Karma Pakshi received were the songs or Dohas of the Indian siddha, Saraha, and the Mahamudra instructions of Gampopa. Instantly he realized, ‘’the infinite wisdom that is self-cognizant of one’s ignorance about all phenomena within samsara and nirvana.’’

The teaching he became best known for was ‘’introduction to the four kayas’’, which he would later transmit to the Mongol Emperors Mongke Khan and his brother Kubilai Khan. In the late 17th century the first Mingyur Dorje Rinpoche received a mind treasure of Karma Pakshi while practising the protector Bernakchen. He saw, “not in a dream, but in reality with my own eyes, a flashing red light that filled the entire room … When I awoke, I saw in the sky before me the mandala of the guru, illusory yet real.”

This live experience became a sadhana practice which passed through the lineage of Karmapas to the 16th and onto his Western students. Trungpa Rinpoche’s terma The Sadhana of Mahamudra (revealed in 1968) was partially inspired by a Karma Pakshi empowerment he received from the 16th Karmapa.

Pakshi also studied within the monastic tradition and ordained many monks. His yogic practice was tummo (inner heat), a practice which can enable yogins to stay outdoors in the coldest winter covered only in a single cotton cloth. Vajra Yogini, the deity who bestows accomplishment in this practice, prophesied in his visions that the realization of the lineage would come to him.

Blessings came abundantly from his touch so that he became celebrated as a mahasiddha, an adept with spiritual powers. His dreams and visions were too numerous to describe, some lasting as long as a week. According to Manson: “He attributes the manifold appearances of peaceful and wrathful deities to having set in motion his teaching on the ‘introduction to the four kayas’.”

During a period of retreat a wisdom dakini appeared in a dream and sang the mani mantra of Chenresig in a special tune, claiming that all who heard it would be greatly blessed. The tune was sung to Manson by Lama Norlha in 2006 and transcribed into ​music notes in the book (page 37), which may be useful for those who like to sing the mani mantra.

Most importantly, Karma Pakshi used retreat periods to perfect lungsem or retention of breath which later, together with his teaching on the four kayas, enabled him to bestow an effective practice to all and sundry in China and Mongolia – emperors and ordinary people alike. So great was his ability that, just with breathing and retention of breath, he was able to ‘uplift’ derelict monasteries.

As the glory of Karma Pakshi’s feats extended, he became celebrated as a lord of miracles.  A living legend. He also became known as a peacemaker with powers to subdue any obstacle.

After more than a decade in retreat he began the greatest spiritual adventure of his life. He received a “golden letter” from Kubilai Khan, the grandson of Genghis Khan, who had heard of Karma Pakshi’s special powers and ‘invited’ him to his court. It was probably more like a command than an invitation, Manson adds. Karma Pakshi was in two minds about whether to go as he had no interest in political activity, but a vision of a serpentine combination of Vajrapani and Nanda proclaimed: “all your teaching and activity will be completed”. With the additional encouragement of the protector Palden Lhamo, it seemed the time was right. The Khans had chosen to align with a Tibetan Buddhist guru.

The meeting with Kubilai went so well that his family received blessings and teachings on bodhicitta, considered the prerequisite to enlightenment. Kubilai invited Karma Pakshi to remain longer but Pakshi often made decisions according to his visions and when the deity Chenresig advised him strongly to leave, he obeyed. It turned out to be a fateful decision, one that would bring serious consequences a few years later – imprisonment, torture and exile on the orders of the vengeful Kubilai.

Eventually, Karma Pakshi made the journey across the Gobi Desert to Mongolia and into the court of Mongke Khan, the current Mongol Emperor. There too, Mongke Khan followed Karma Pakshi’s teaching, quickly attaining freedom from “subject-object perception of duality”. Together they implemented several social benefit schemes including the re-distribution of royal treasury funds to the people, the release of many prisoners, and sponsorship of temples. Karma Pakshi was inclined towards vegetarianism and this probably influenced the Emperor to add an edict not ​to kill animals, which lasted for about a year. He proclaimed Mongke Khan as a great dharma king, although Mongke was still an active warrior. While at the court, Karma Pakshi gave tantric empowerments during which he claimed to drink dry the palace stores of alcohol while not becoming inebriated himself: there was no concept, thus it was like “water merging into an ocean”. 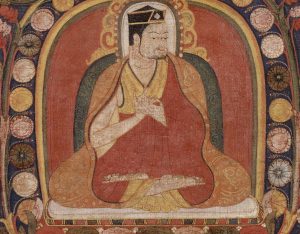 Frontispiece photo of Karma Pakshi from a 13th century painting. With permission from the copyright owner.

To quote Manson: “He claims his edifying discourses and instructions were understood in as many as 360 languages so the hearers were able to gain liberation into heavenly realms”. Mongke Khan and Karma Pakshi became patron and priest with the exchange of wealth for precious teachings; and this enabled the construction of a monumental 60-foot statue of the Buddha already envisioned by Pakshi, to be called the Ornament of the World, at Tsurphu Monastery.

Meanwhile Kubilai felt slighted by Pakshi’s early departure, and combined with rumours that the great adept was an evil spirit, plotted his revenge.

Here the life-story runs parallel to that of Padmasambhava. He could not be killed either by drowning, burning, poisoning or throwing off a cliff. In fact, the executioner committed suicide, while Pakshi’s death penalty was commuted to exile on a desert island, where he remained for two years extending his Limitless Ocean series of writings. At his next encounter with Kubilai, he was incarcerated in a temple with the doors nailed shut but the walls became transparent. At this, Kubilai finally ‘saw the light’ and became his devotee.

To summarize Karma Pakshi’s influence and life work is like trying to count grains of sand: his travels, visions, teachings, writings, conversions, construction of temples, statues, miracles. At Karma Monastery he commissioned a statue of the future Buddha, Maitreya; at Nenang, a statue of the past Buddha, Dipamkara; and at Tsurphu the Sakyamuni Buddha, ‘Ornament of the World’. When assembled, the 60-foot Sakyamuni statue was leaning. Karma Pakshi straightened it by sitting upright in front in meditation.

His deeds never died; they became immortalised in song. Seven centuries later when Chögyal Namkhai Norbu passed through the region of Kham in 1951, he heard the nomads singing devotional songs and noted the words. Manson quotes almost the entire song and here are a few extracts:

​For each great person, for everyone,
He turned the dharma wheel in China
The man who encouraged Chinese people to dharma
Is the yogin Karma Pakshi –
To the Lord Karmapa I pray!

When he was hurled from a white rock,
Spontaneously he became the king of birds, the vulture –
To the Lord Karmapa I pray!

When thrown into red fire
Spontaneously he became red Agni the god of fire –
To the Lord Karmapa I pray!

When put inside a small cell,
Spontaneously it became a multi-door stupa –
To the Lord Karmapa I pray!

Karma Pakshi died at the age of 79 in 1283. At his death two suns appeared and a rain of flowers fell. In the cremation ashes were his tongue, heart and eyes, as well as ‘ringsel’ or relics.

Manson has created a rare spiritual biography blending academic research skilfully with a free-flowing narrative. He rides the waves never sinking into the swirling depths of hagiography. A truly remarkable achievement and a must-read for anyone who aspires to and derives inspiration from spiritual heroism.